The Goldilocks of Bipods: Magpul’s New Bipod is Juuust Right 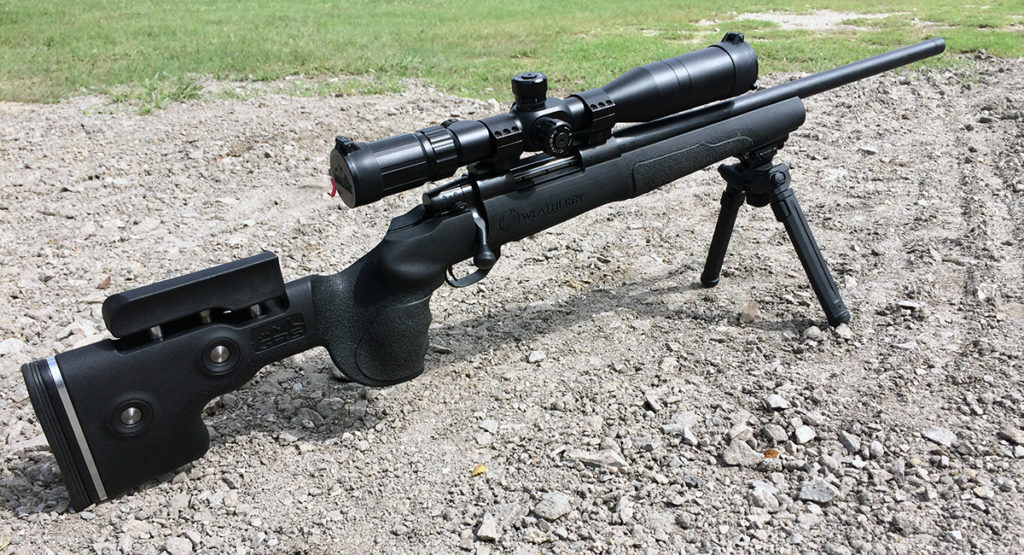 From target guns to hunting rifles to AR-15’s, Magpul’s bipod is a great addition to any setup.

Did you know there are 409,039,856 different kinds of muzzle devices for AR-pattern rifles? There are also 2,804,800 varieties of red dots, 28,002 rifle stock variations, and 89,900 companies manufacturing aftermarket 10/22 parts. (I’ve come up with these numbers after countless hours of careful research, so feel free to double-check.)

And how many bipods companies are there? Three. You can pick up a cheap-o Caldwell unit at Wal-Mart, you can buy a slightly more expensive, made-in-the-USA bipod from Harris, or you can get started on your divorce by dropping $250+ on an Atlas.

This is hyperbole (calm down, keyboard warriors), but considering the plethora of other gun-related accessories, it seems like there should be some kind of middle ground between cheap and premium in the bipod world.

That’s why I was so excited to get my hands on Magpul’s new bipod. Introduced last summer, the Magpul Bipod fills a space that’s been empty in this product category for too long. I’ve been using mine for the last four months, and I have to say — I’m impressed. 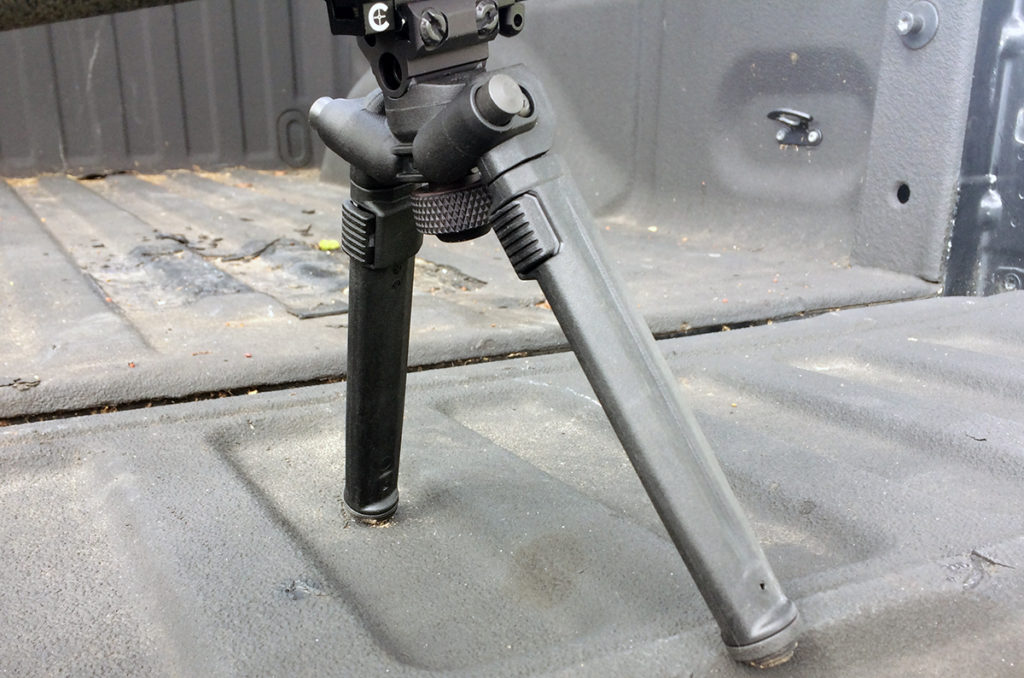 The first thing you’ll notice about Magpul’s product is the lack of external springs. Hiding the springs within the legs makes for a sleek, no-snag design comparable to much more expensive products.

The springs help deploy the legs, a quick, easy process that can be done without pushing any buttons.

Once the legs are deployed, users can choose from seven different heights spaced at 0.5 inches apart, which provides about 3.5 inches of adjustment. To adjust the height, each leg must be pulled down manually while depressing a large, serrated button. 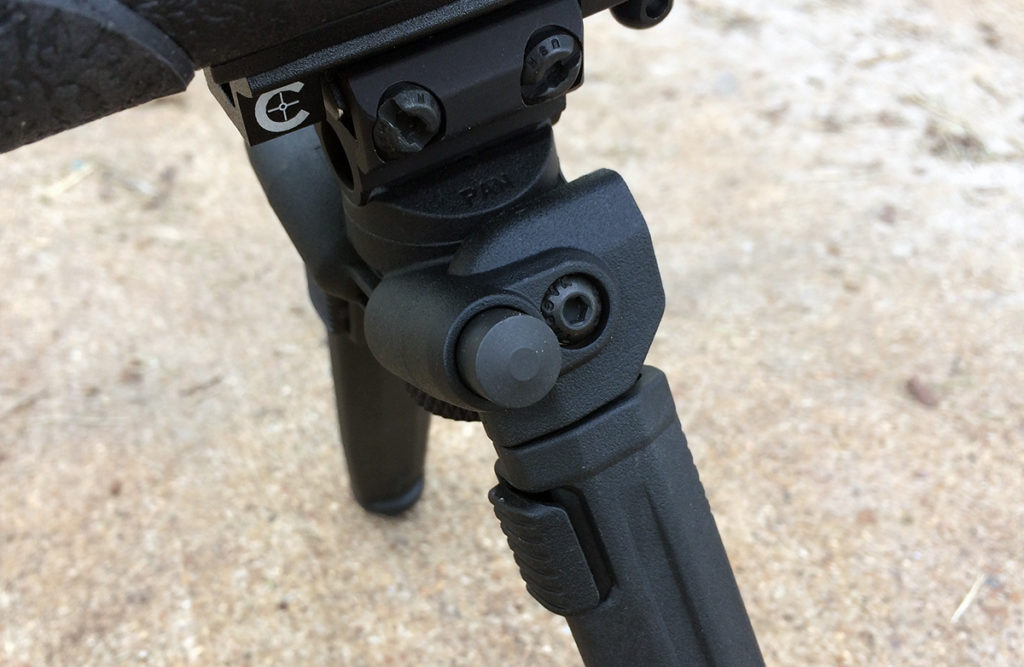 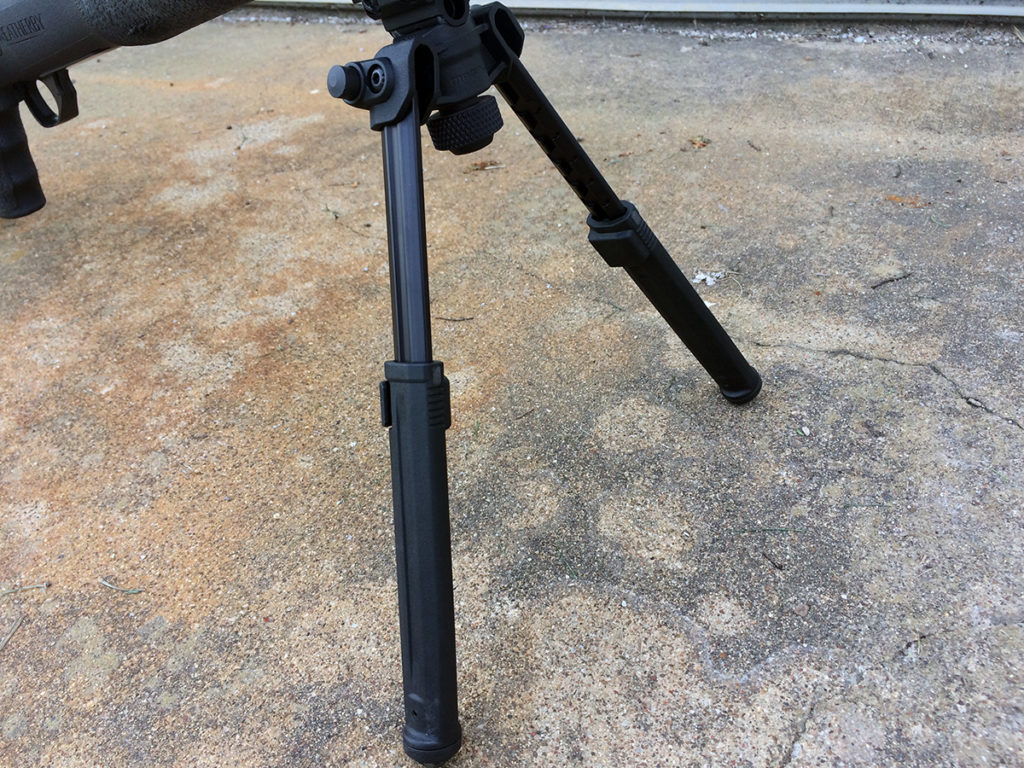 With seven height settings spaced in half-inch increments, it isn’t hard to find the right height for any kind of shooting situation. 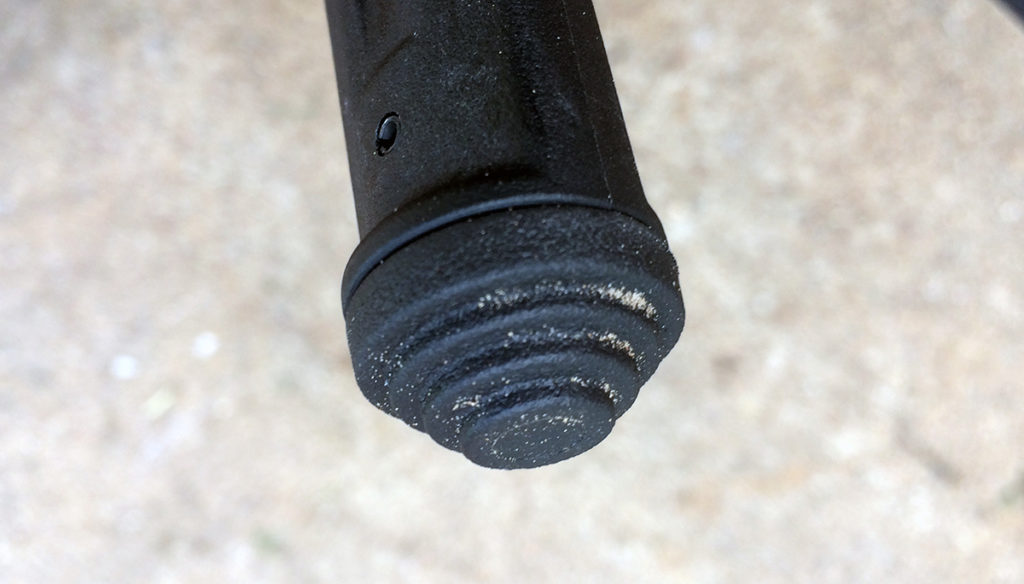 Rubberized feet provide a stable shooting platform in most conditions.

To stow each leg, users push a steel button located on the upper portion of the unit and rotate the leg towards the muzzle of the gun. Magpul also includes staggered, rubberized feet, which can be swapped for Atlas 5-H style feet by popping out the roll pin.

The bipod’s coolest (and most useful) feature has to be its ability to pan a full 40 degrees and tilt an industry-leading 50 degrees. Panning allows shooters to follow a target or switch between targets without dragging the bipod’s legs through the dirt, which, if my high school trigonometry is serving me right, provides about 290 yards of pan at 400 yards. Tilt allows a shooter to keep the reticle level even on uneven ground. 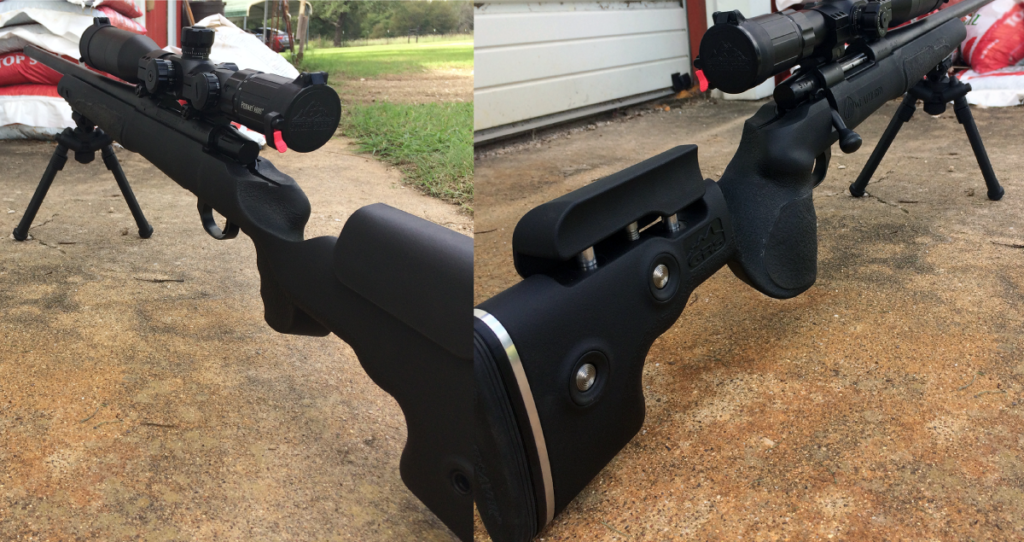 Forty degrees of pan provides a broad field of view without moving the bipod legs. 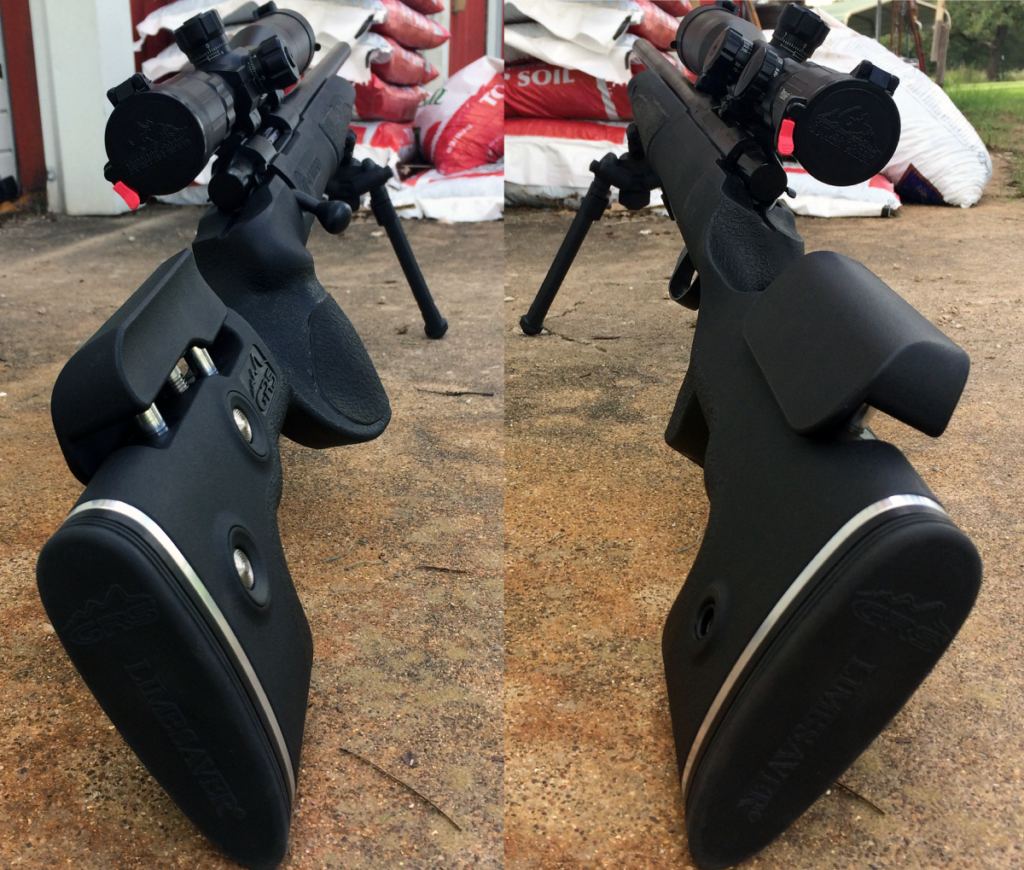 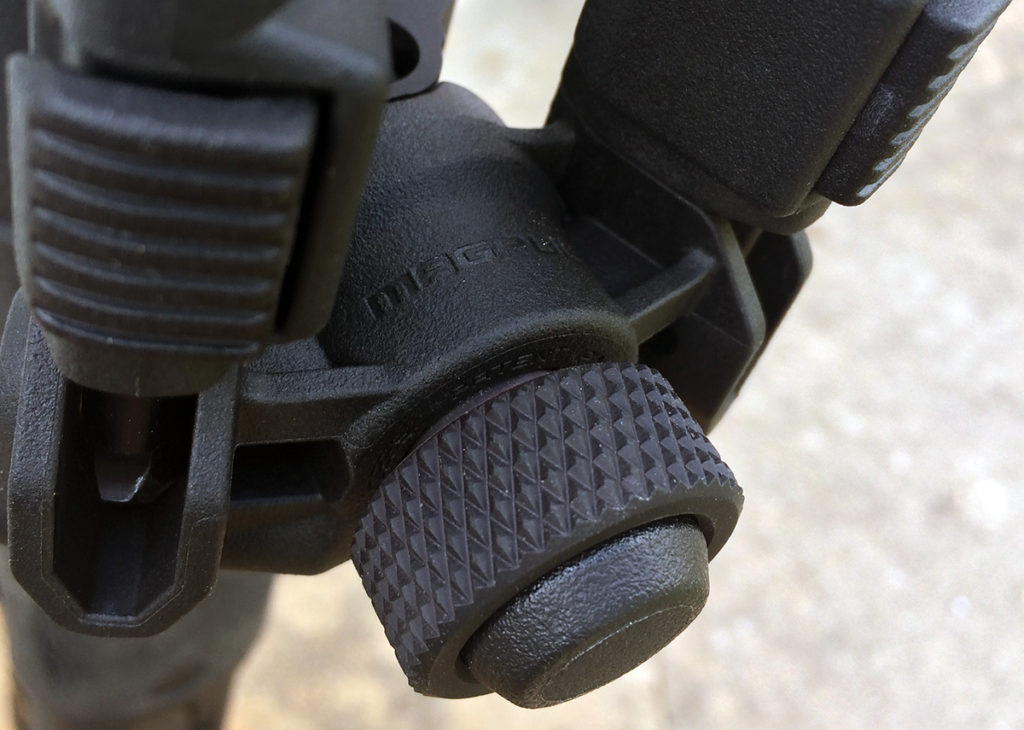 The tension knob is easy to turn even with gloves and features a rubberized bottom.

The tension on both movements is controlled by a large, aggressively textured aluminum knob. Users loosen the knob to allow the pan and tilt to move freely or tighten it to lock it in place. The aggressive texturing allows for some serious torque, and I found that it doesn’t loosen easily, even after shots from the 308 WIN rifle I used for testing. The knob also features a rubberized bottom, which provides a stable, non-marring surface when shooting from a rest without the bipod legs deployed.

One feature you might expect from a high-end bipod is absent on Magpul’s — it doesn’t include an intermediate locking point. The legs lock only at the 90-degree position, rather than at the 90 and 45, which means the bipod can’t lower any farther than the lowest leg height.

Still, at only 11 ounces, Magpul’s unit would make an excellent addition to any hunting rig. Its ability to pan and tilt allows hunters to track the game on uneven ground, and the hidden-spring design keeps the legs out of the way until the game is in sight. Plus, with options for M-LOK, A.R.M.S. 17S Style, and 1913 Picatinny rail, there’s likely a Magpul bipod for your favorite hunting rifle. 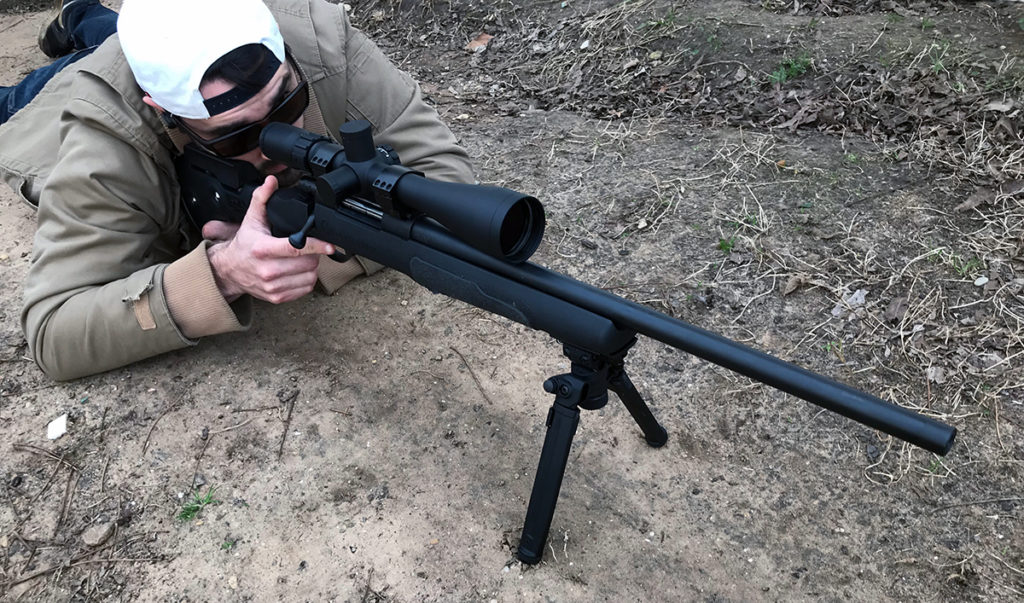 The bipod held up well during testing, and I haven’t had any issues since I began using it four months ago.

But a feature-rich bipod won’t do you much good if it breaks in the field, so the real question is, does it hold up?

I’ve only had my sample for about four months now, but I haven’t experienced any significant issues. I’ve used the bipod at the range and while deer hunting, and it’s never failed to deploy quickly and silently and provide a secure, stable rest. The legs have never slipped after being locked in place, and they appear sturdy even at the highest height setting.

To test durability, I pointed the rifle towards the ground and leaned on the bipod well beyond the stress it might experience during normal use. I also pushed the bipod quickly and forcefully into the ground, as if I had just spotted game and gotten into the prone position. Magpul’s product passed both tests without showing any signs of stress or function failure.

My only trouble was caused by some grit that found its way into one of the legs and made adjusting the height slightly more difficult. But it hasn’t interfered with function, and the leg has been getting progressively easier to pull up and down.

When deployed, the legs also wobble more than I expected. While I was initially concerned, I found that the wobble could be used to load the bipod, and it didn’t affect stability in any noticeable way. Still, Magpul’s claim that the bipod uses “tight, precision tolerances” that “mitigate squeaks and rattles” may be overstated. 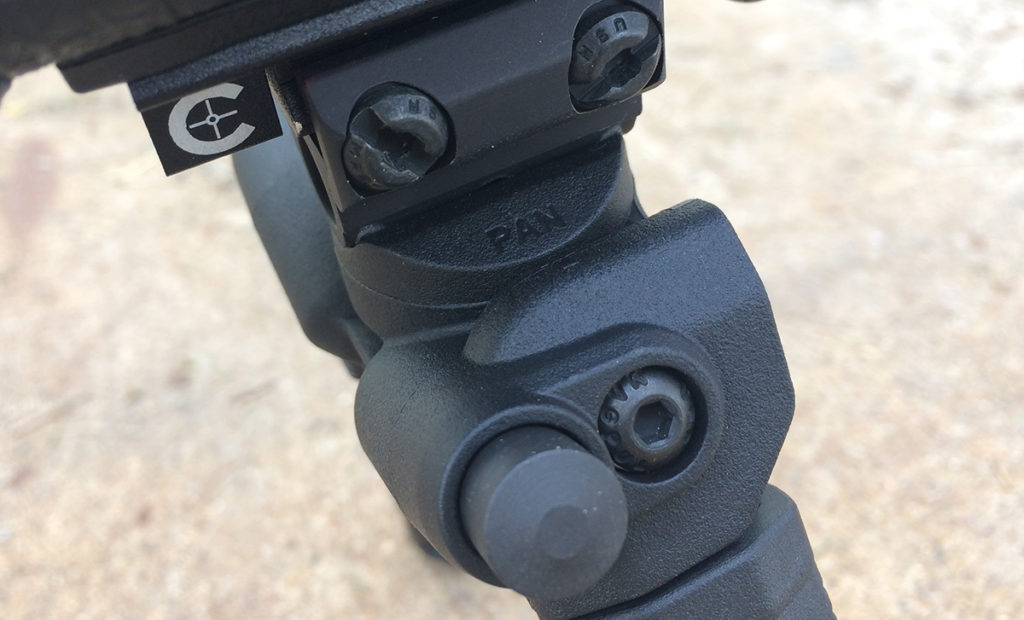 Though the legs wobble a bit when deployed, the unit as a whole is a well-constructed mix of aluminum, steel, and polymer.

This isn’t to say it’s not well-constructed. What at first glance appears to be a plastic bipod is actually a mix of 6061 T-6 aluminum, stainless steel, and polymer that both provides strength and saves weight. The legs, for example, are composed of a steel upper married to a polymer lower. The button that controls the locking mechanism is steel, and Magpul says other internal components are steel as well.

Is it an Atlas? No. But it includes some of the same features for 30 percent of the cost, and it’s built to last for as many hunting or range trips as you want to take. For the money, I don’t think there’s a better value in bipods. It’s about time someone filled this space, and Magpul has done solid work.