In 1977 a seasoned LEO by the name of Steve Chaney and a rookie named Linda Lawrence responded to a call regarding a possible burglary in progress. Rather than a burglar, they found the soon-to-be-ex-boyfriend of the homeowner hiding in her bedroom. The boyfriend, John James Mullery, was awaiting his girlfriend’s return so he could kill her. Instead, he ended up facing off with two police officers.

During the ensuing struggle, Lawrence managed to get off a shot that mangled one of Mullery’s arms before he wrested her gun from her and shot her with it. Chaney’s fight then stretched out seemingly forever. His Smith & Wesson Model 64 immediately became the focus of the enraged Mullery–who was high on PCP and cocaine–and was soon emptied. Two bullets had entered a nearby wall when Chaney deflected Mullery’s attempt to shoot him with his own gun, two had been fired point-blank into the attacker’s chest by Chaney, and Chaney had purposefully fired another into Mullery’s ribcage. Prior to the rib shot Chaney had fired a round into the ground. 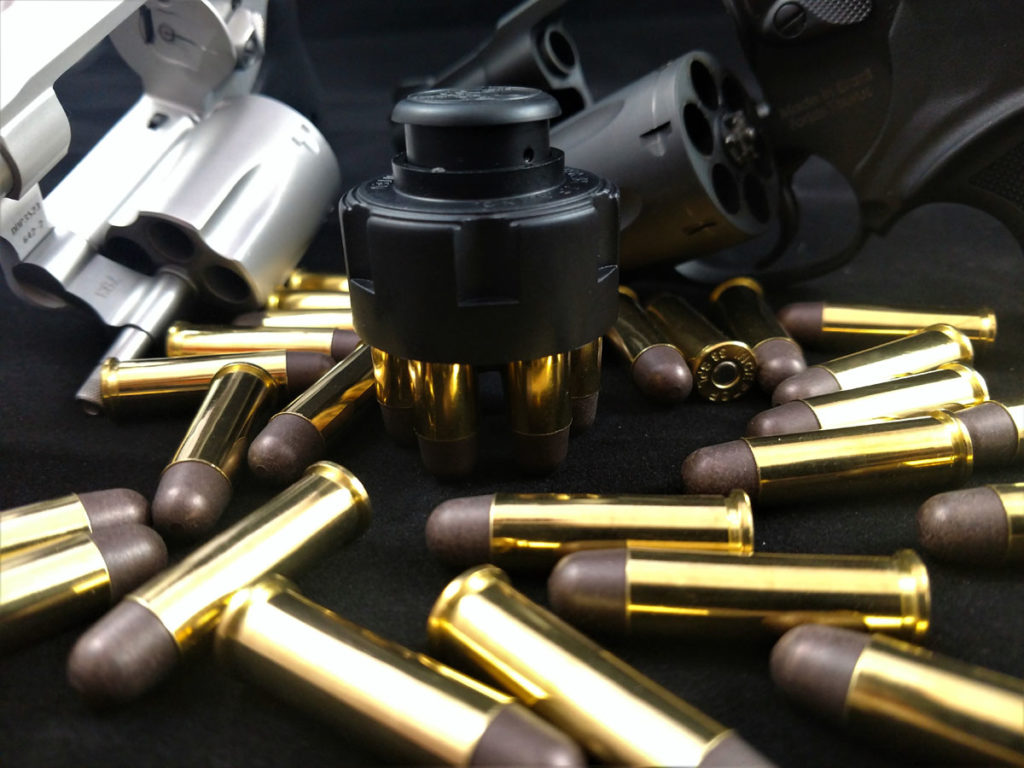 If you own a revolver you should also own a speedloader or speed strips – or both.

This is where relevancy becomes clear. In 1977 revolvers were, of course, standard-issue among law enforcement, but did not come with speedloaders. Dump pouches were woefully inadequate, as were pockets, but that’s what the majority of officers had available. It meant reloading under duress was an ordeal. It meant death over survival in some cases. This time, though, the officer in question had come prepared: Steve Chaney had a personal speedloader. It was a Dade speedloader he’d purchased for himself for use on the job and it became the speedloader that saved his life. As Chaney reloaded, Mullery stabbed him in the back and beat him with a tire iron. Chaney turned around, gun loaded and took the shots that would end the battle.

Speedloaders have been around in one form or another for more than a century. When you’re at the range you can reload at your leisure but if you’re in a fight for your life–or at a competition–you’ll need one (or more). The Safariland Comp II Speedloader is injection molded for a precise fit and features a circular knob on the back for gripping during reloading. It also has a coil spring locking mechanism to keep your cartridges secure. 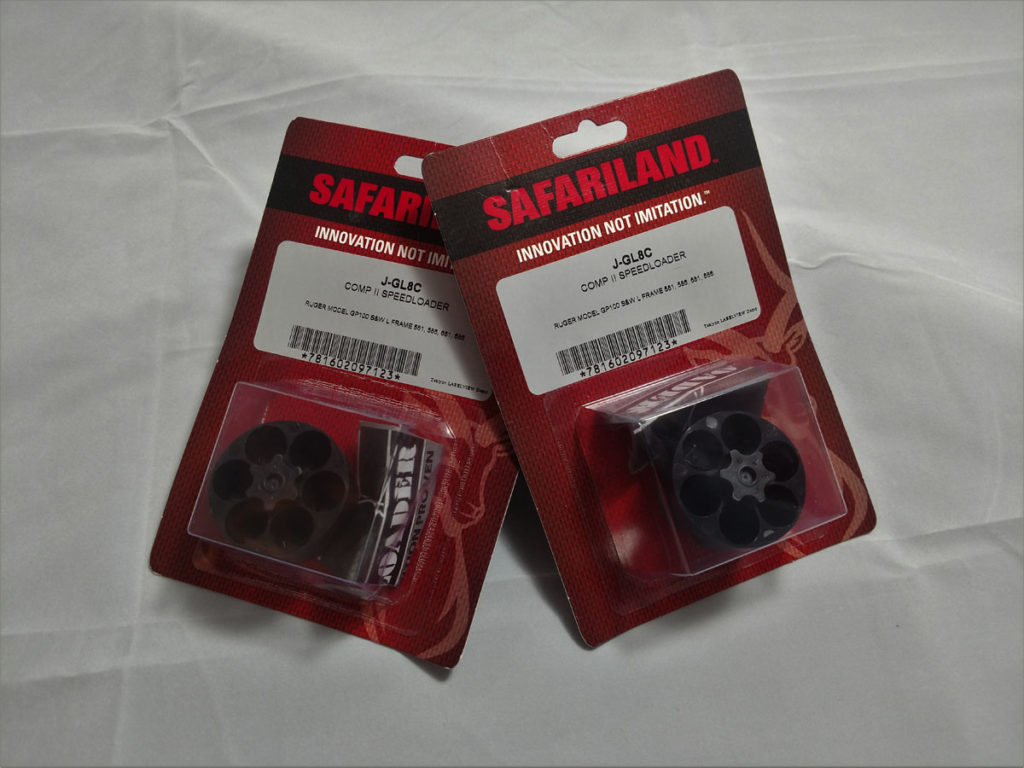 Using either the Comp I, II, or III Speedloader is simple: load cartridges into the speedloader, put the rounds nose-down on a flat surface, and simultaneously push down and rotate the knob clockwise. You’ll hear the “click” of the cartridges being locked into place. To load your revolver, line up the cartridges with the chambers of the cylinder and push until you meet slight resistance. At this point further pressure will engage the plastic star on the face of the speedloader so it releases the cartridges, allowing you to load your gun. 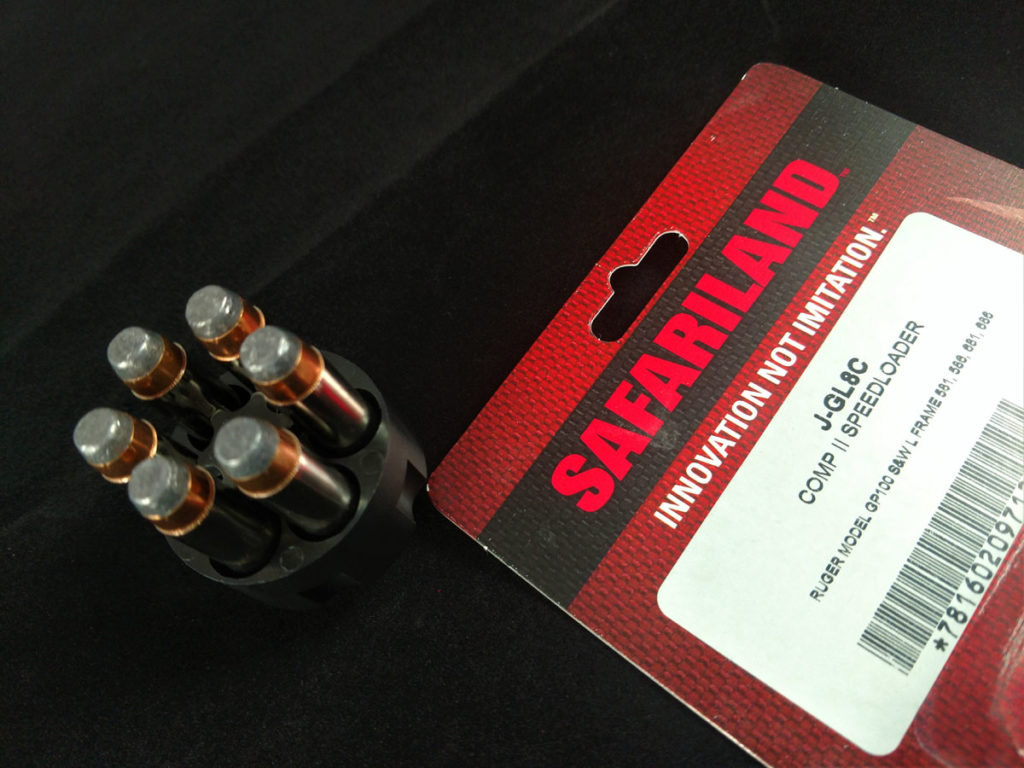 The Safariland Comp II Speedloader has a coil spring locking mechanism to hold cartridges in place.

Unlike some speedloaders, the Safariland Comp line is well-designed for speed and efficiency. Safariland’s require only a single motion to be used; many other brands require the shooter to execute multiple movements, taking more time and thought. With the Safariland line of speedloaders, you can reload without taking your eyes off the target. 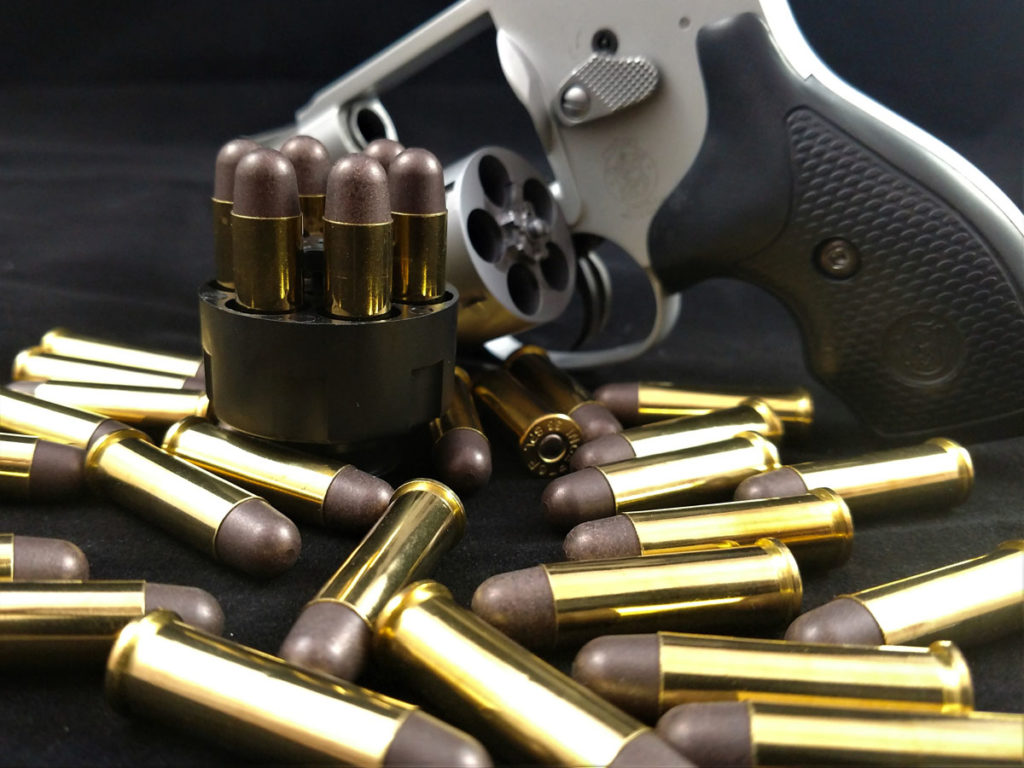 Unlike some speedloaders the Comp II Speedloader only requires a single motion to use it.

The knobs on the Comp speedloaders are different sizes with each numbered design featuring a larger knob: I and II are good for self-defense use while III has an extended knob ideal for competition. The I is the only model available for five-shot .38 Special revolvers, the II comes in four sizes including for Colt, Ruger, and Smith & Wesson, and the III is offered in two sizes for K and L-frames. Some revolvers will need custom grips to work well with these speedloaders.

Speed strips are another option for revolvers. Bianchi, which is one of the Safariland Group’s brands, offers a line of speed strips. John Bianchi designed the speed strips five decades ago and today they remain a fantastic, slim reloading method for revolvers. 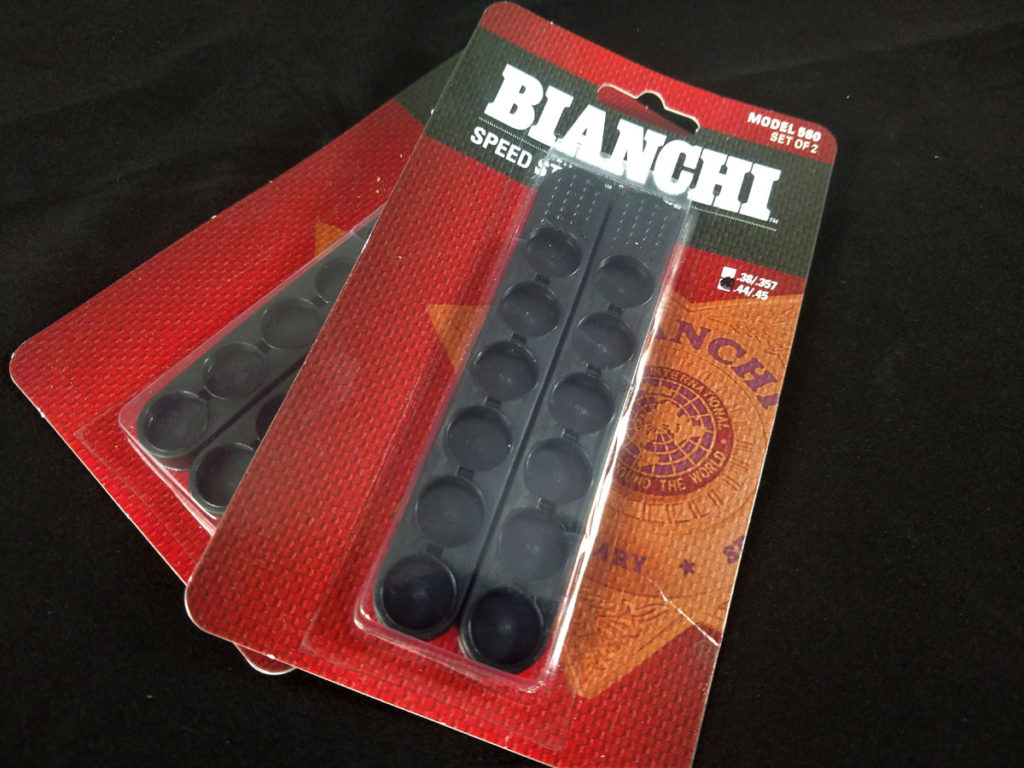 Bianchi Speed Strips are great for revolvers with grips that make cylindrical speedloaders impossible to use or in cases when you need to conceal a speed strip in your pocket.

Bianchi Speed Strips are what they sound like: flat, flexible, urethane strips with a six-cartridge capacity. There is an additional, textured tab approximately one inch in length behind the part of the strip meant for cartridges designed so the shooter can grip it to reload. They’re offered for .38/.357 or .44/.45. Speed strips allow shooters to load two rounds at a time and can also be used for tactical reloads when only a few chambers are empty.  Because they’re flat they create less bulk than cylindrical speedloaders; some revolver owners prefer them because they fit more easily in their pockets. Bianchi Speed Strips can also be used in cases where a revolver does not accept a speedloader and the owner cannot or prefers not to alter it the gun. Tip: leaving the sixth space empty on a speed strip sometimes facilitates easier reloads. 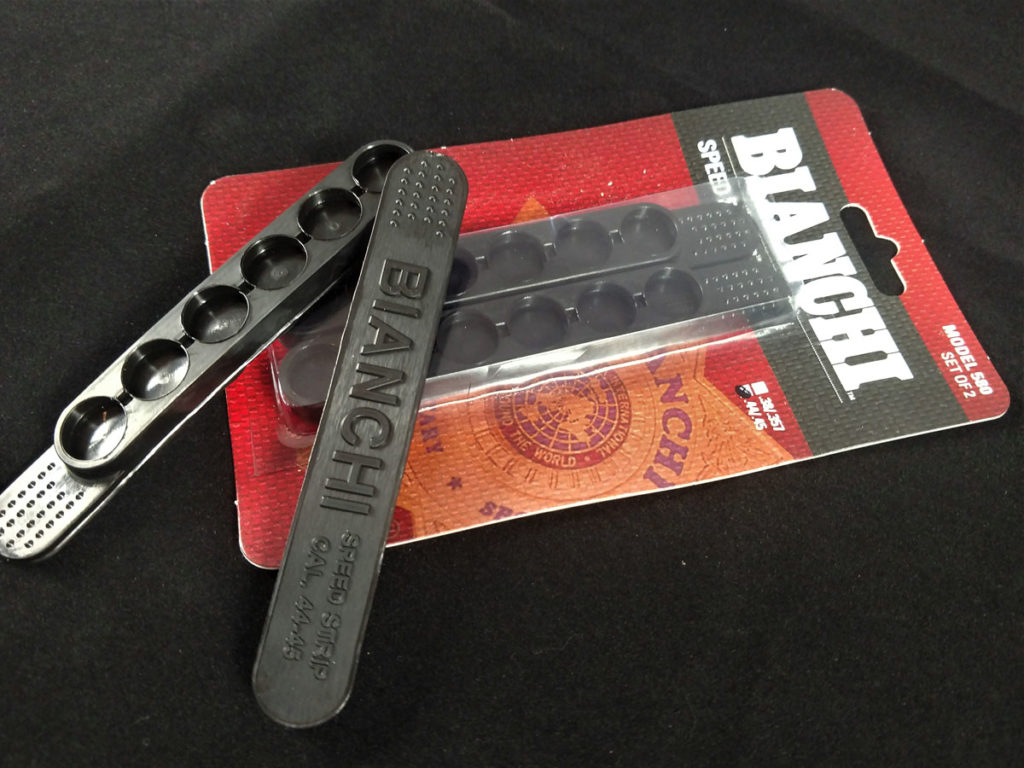 The speed strips made by Bianchi have an additional, textured tab at one end to make using them simpler. 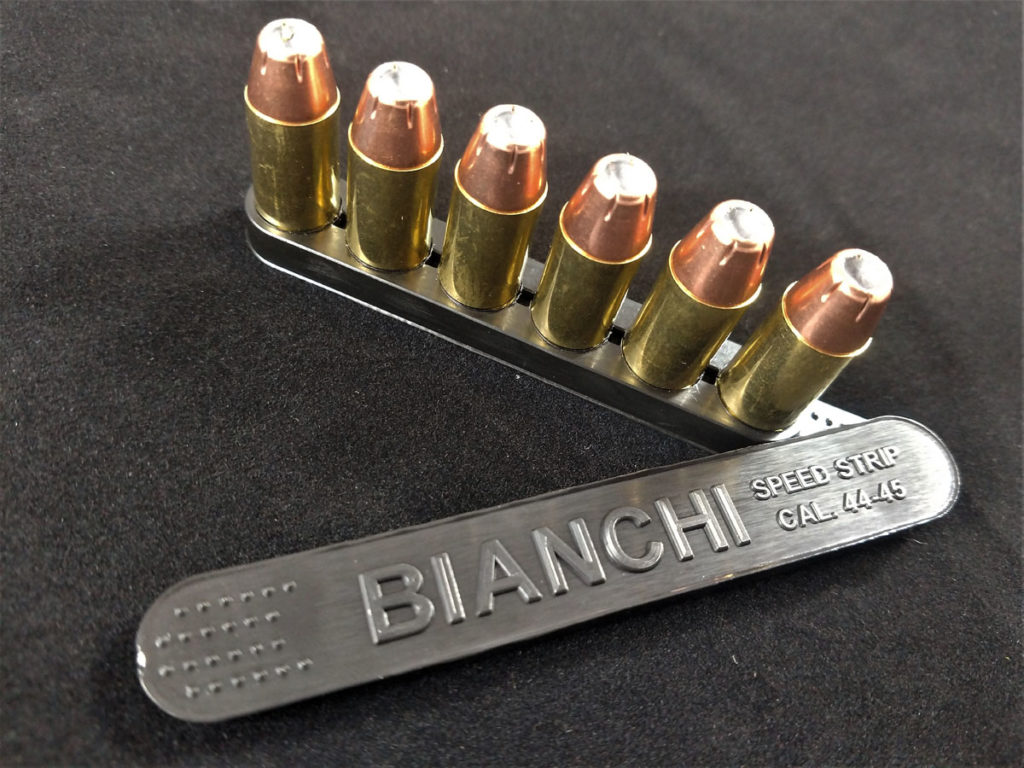 These speed strips hold six cartridges but you can leave one slot open at the end to make using the speed strip easier.

If you own a revolver you should own speedloaders and/or speed strips. Just as with any skill they do require practice, so spend some time on the range working on smoothly ejecting spent brass from your revolver’s cylinder and reloading with the Safariland Comp Speedloader or Bianchi Speed Strips (or both). They’re not gimmicks, they’re useful tools that could save your life someday. Or, less dramatically, they’ll help you speed up reloads during matches. Either way, they’re a vital part of your kit as a revolver owner so stock up and get to training. 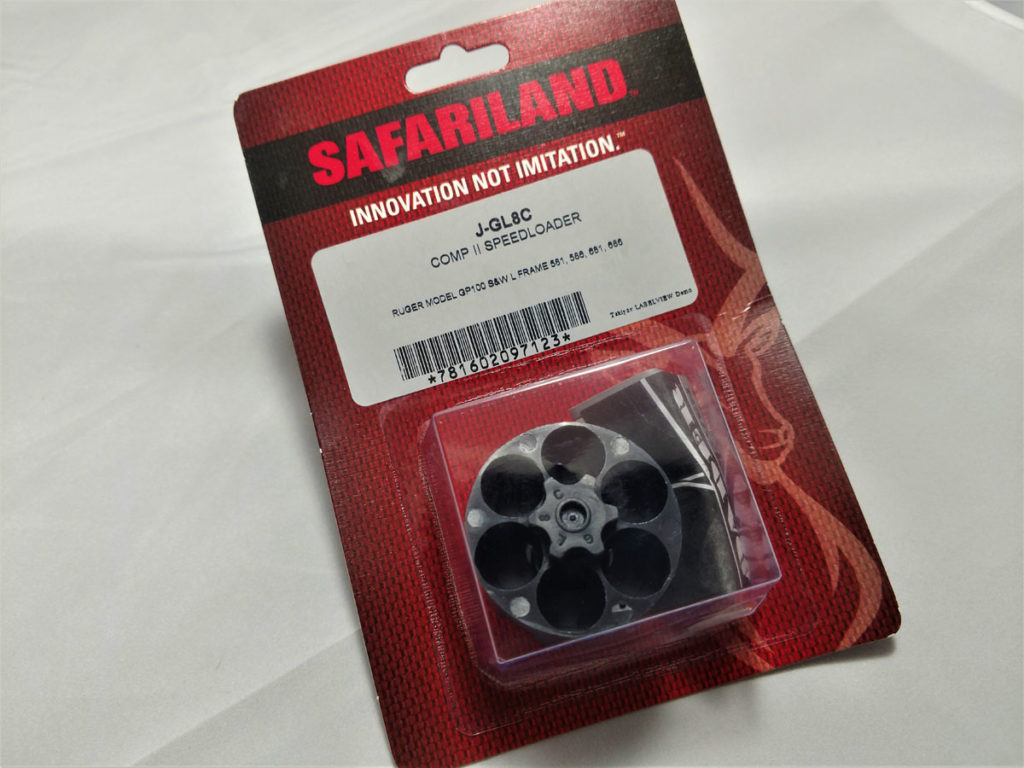 ***Shop GunsAmerica for all your gun accessories***