SIG Sauer is going after a new market segment with their Gadsden Flag-themed Tread rifle and Tread family of accessories. An extension of the M400 series, the Tread rifle is a direct-impingement AR-15-type rifle chambered for 5.56 NATO.

SIG’s goal building the Tread was to focus on making a truly modern AR, without sacrificing any features, at a price point under $1,000. These features include a lightweight Magpul stock and magazine, a new in-house SIG pistol grip, ambidextrous controls, a free-floating modular handguard, a stainless steel barrel and a suppressor-ready flash hider.

There’s even a Tread t-shirt for people who want to let their SIG pride shine on and off the shooting range. 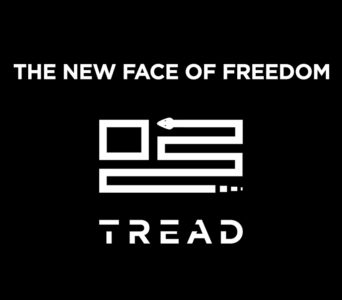 SIG really made sure to tick all the boxes putting the base Tread rifle together. Making it suppressor-ready is already one step ahead of many AR builders. The stainless steel barrel has a 1-in-8 twist to accommodate a wide range of ammo types, and unlike many companies’ base model rifles, SIG thoughtfully went with a free-floating M-Lok handguard.

Ambidextrous controls include the safety selector and magazine release button and the bolt latch is oversized for ease of use. Instead of a military-style trigger group, the Tread has a polished then hard-coated single-stage trigger, and for once, iron sights are included with the package.

Even with the full-length 15-inch non-skeletonized handguard the Tread weighs in at 7 pounds flat. Part of that is due to the handguard design which omits a 12-o’clock rail. Instead, it has 12’o-clock M-Lok slots which can be used optionally to install iron sights. 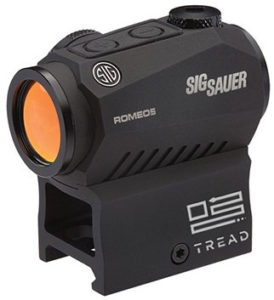 For shooters who don’t want to run irons or only have them as backups, the Tread Romeo red dot sight is an inexpensive alternative. The Romeo5 Tread 1x20mm has a downright friendly $149 MSRP.

Other Romeo5 Tread features include 10 power settings, 8 daylight and 2 night vision. It uses SIG’s MOTAC motion-sensing power function, which automatically powers on when picked up and shuts off after a period of inaction. Not that battery life is a big concern. It has a 50,000-hour run time on a single CR2032 cell.

A Picatinny-compatible co-witness-height mount is included with the Romeo5 Tread along with a low-rise mount.

SIG is looking to bring new shooters into the fold with the Tread rifle and its accessories, but in reality, the Tread is a good option for anyone looking for a complete rifle package right out of the box.

Next post: October Coyotes – Don’t Miss Out on Primetime Conditions!