Sig Sauer provided more details this week on the release of the M17-Commemorative Edition, a near-exact replica of the P320 variant that won the U.S. Army contract for the modular handgun system last year. Sig has only produced 5,000 of these handguns, and they’re selling for $1,220 a pop.

“The U.S. Army’s selection of the M17 earned the SIG SAUER P320 a place in history. It’s regarded as one of the world’s most influential firearms as it enters service with America’s Armed Forces across the globe,” said Tom Taylor, Chief Marketing Officer and Executive Vice President, Sig Sauer, Inc. “The M17 is the culmination of Sig Sauer’s steadfast commitment to providing the military with the very best, and our determination to never settle. We are excited that collectors and civilians have an opportunity to participate in this history.”

Each handgun will arrive in the same plain cardboard box Sig uses to ship the M17 to the U.S. Army. The package will include one 17-round magazine and two 21-round magazines. All the components, coatings, and markings will match the M17, including a cutout for the Leupold DeltaPoint Pro sight. The gun also ships with the SIGLITE front night sight and removable Night Sight rear plate.

Besides the DeltaPoint cutout, the M17-Commemorative Edition differs from the commercial Sig P320 in its inclusion of a manual safety, which the Army required in its contract. As Clay pointed out at SHOT Show, the M17 also includes internal coatings that help resist corrosion not included on the P320.

The M17-Commemorative Edition differs from the actual M17 only in the absence of anti-tamper devices. 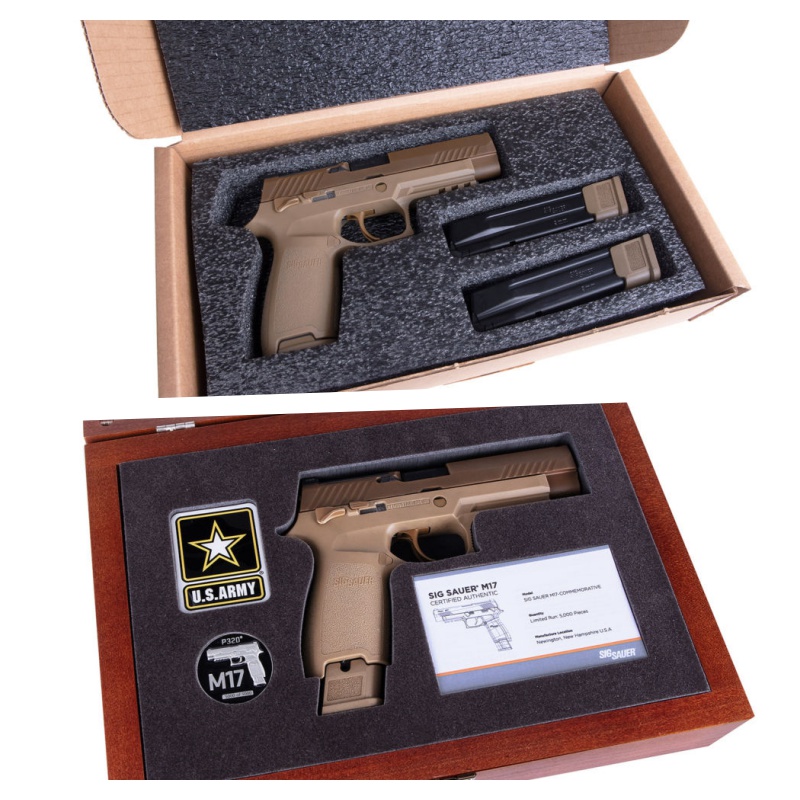 Once customers register their M17 with Sig, they’ll receive an official certificate of authenticity and commemorative challenge coin, both with serial numbers matching the purchased pistol. Sig is also producing collector’s cases with cutouts for the handgun, certificate, and challenge coin. The cases are being sold separately for $199.

Each pistol will be serialized M17-0001 through M17-5000 and include the Army’s required unique identifier (UID).