Trump Backs Out of UN Arms Trade Treaty: ‘We are taking our signature back’ 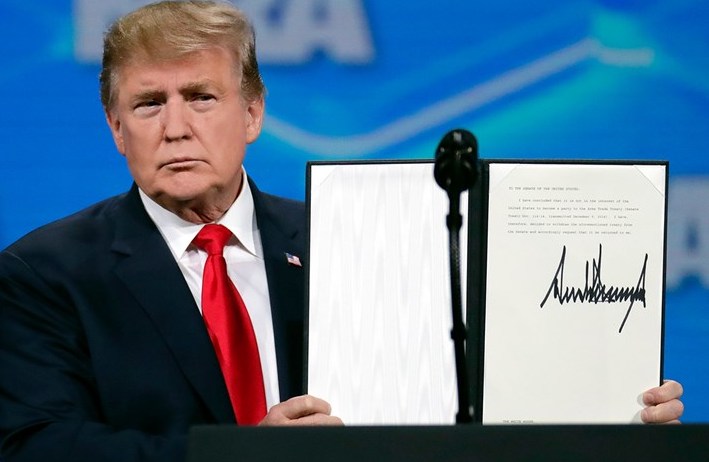 Trump withdraws from the U.N.’s Arms Trade Treaty which seeks to regulate the international trade of conventional arms. (Photo: NRA-ILA)

Kudos to President Trump who on Friday withdrew the U.S. from the United Nations Arms Trade Treaty.

An effort to globalize gun control via the regulation of “conventional arms,” the Arms Trade Treaty was approved by the Obama Administration in 2013. Thankfully, it was never ratified by the U.S. Senate so it never became binding here in the Land of the Free.

But because former Secretary of State John Kerry actually signed the darn thing at the behest of Obama, it was still a threat waiting in the wings. While GOP lawmakers in Congress passed amendments year after year banning the Dept. of Defense from using taxpayer dollars to promote the treaty, which is the best they could do to keep it from gaining momentum stateside, it needed a POTUS to officially kill it.

Trump did exactly that at the National Rifle Association Annual Meetings and Exhibits in Indianapolis, IN.

“We will never surrender American sovereignty to anyone,” Trump said during his NRAAM address. “We are taking our signature back.”

“His commitment to un-sign the anti-gun United Nations Arms Trade Treaty that was forced on us by John Kerry and Barrack Obama, gives NRA members one more reason to enthusiastically support his presidency,” Cox continued. “Donald Trump isn’t afraid to stand on the side of freedom and defend our God-given right to self-defense and we couldn’t be prouder to stand with him.”

UN Secretary-General Antonio Guterres lamented the move, saying that it comes at a time when we are witnessing “growing international tensions” and that the ATT is the “only global instrument aimed at improving transparency and accountability in the international arms trade.”

What are the issues with the ATT? In a 2013 letter to Obama, pro-gun lawmakers highlighted the main problems:

If we’re being honest, Trump has been a bit of a mixed bag when it comes to protecting the 2A during his first term. On one hand, Trump appointed justices to the Supreme Court to cement a 5-4 pro-gun majority, approved the repatriation and sale of surplus military guns to the public, and, as already mentioned, killed the Arms Trade Treaty.

On the other hand, POTUS instituted a retroactive ban on bump stocks, flirted with the idea of a federal red flag law and raising the age to purchase a firearm to 21, and failed to champion national concealed carry reciprocity and legislation deregulating suppressors.

Point is Trump is not the 2A stalwart the NRA makes him out to be. But that’s okay. Because given the alternative, whoever it is that the Dems nominate to run in 2020 be it Comrade Bernie or Crazy Kamala Harris, Trump is still the best chance we have to ensure our right to keep and bear arms remains intact for future generations.