Stern Defense makes great AR magazine well adapters and conversion kits which turn your AR Lower into a Pistol Caliber Carbine. They come in 9mm versions for Glock, Beretta and M&P magazines, but the one that caught my eye uses S&W M&P .45 ACP mags. Mag-AD series adapters install in seconds, just like an AR magazine.

The Stern MAG-ADMP45 series adapters are made of aircraft-grade aluminum, lightweight with an ergonomic design. These adapters are very sophisticated. They lock in hard with no wiggle after adjustment. They hold your mags in and drop them free. The last round bolt hold open works every time. 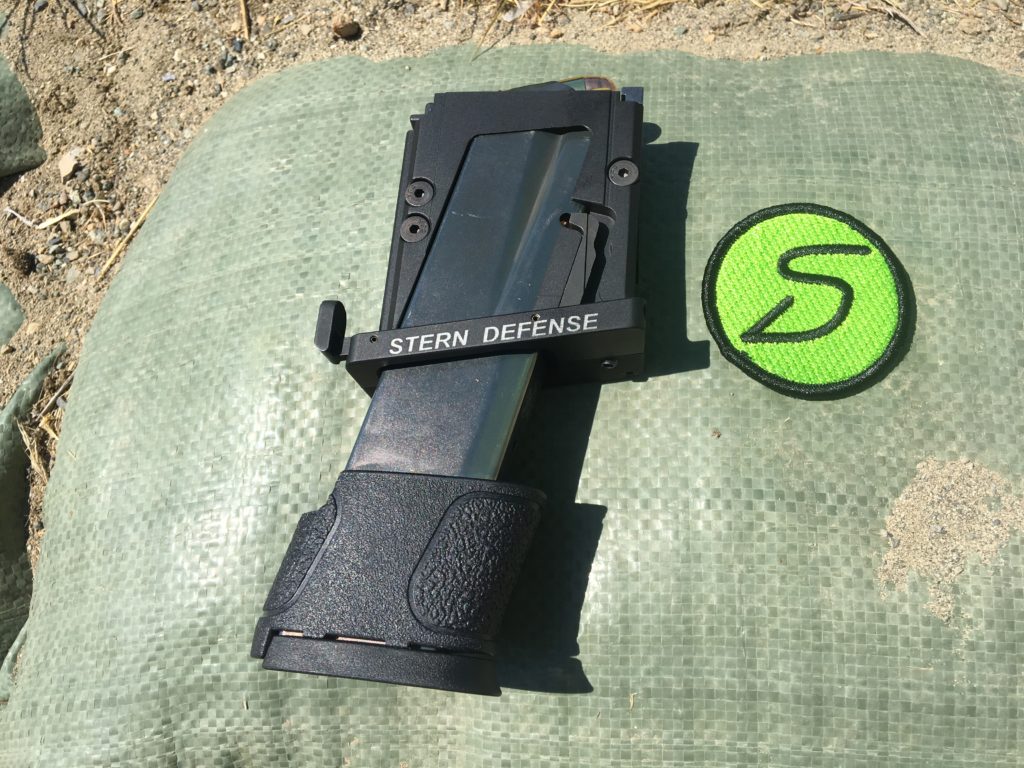 This is what plugs into your magwell. You can see the magazine release sticking out to the left.

It is no secret that I am a fan of pistol caliber ARs. Pistol caliber ARs are cheap plinkers and great training tools perfect for new shooters. You can safely shoot handgun steel and use the magazines you already have. Law enforcement agencies can build an AR that accepts their duty pistol mags for the ultimate police patrol rifle. 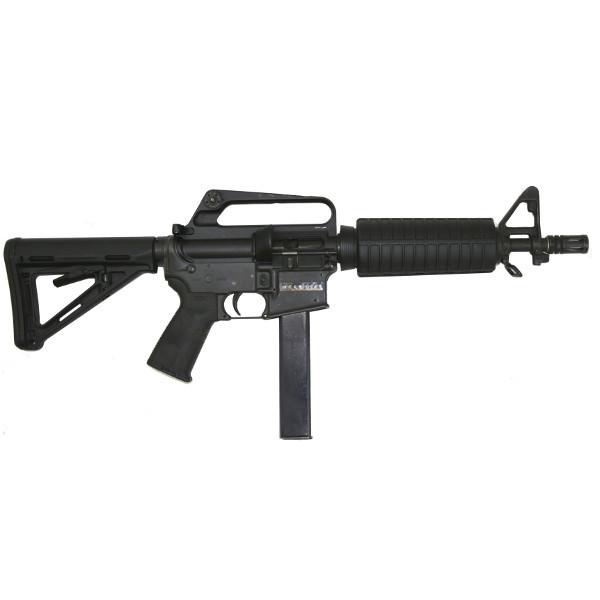 The original 9mm AR was the Colt SMG which used a simple direct blow back operating system. This means that there is no locking mechanism—the only thing resisting the recoil from the firing cartridge is the weight of the bolt and buffer pushed by the recoil spring. This is a simple system and at 9mm energy, it works well. Most pistol caliber ARs today use this same system.

Because there is no MILSPEC for pistol caliber ARs, each manufacturer makes them a little differently. If you buy everything from the same place, your chances of an easy build like mine are much higher. Maybe you will be lucky. However you decide to get there, now you don’t have to build a dedicated lower. Stern has a web page you can check before purchasing to ensure compatibility with your setup so you don’t buy parts that can’t fit together. 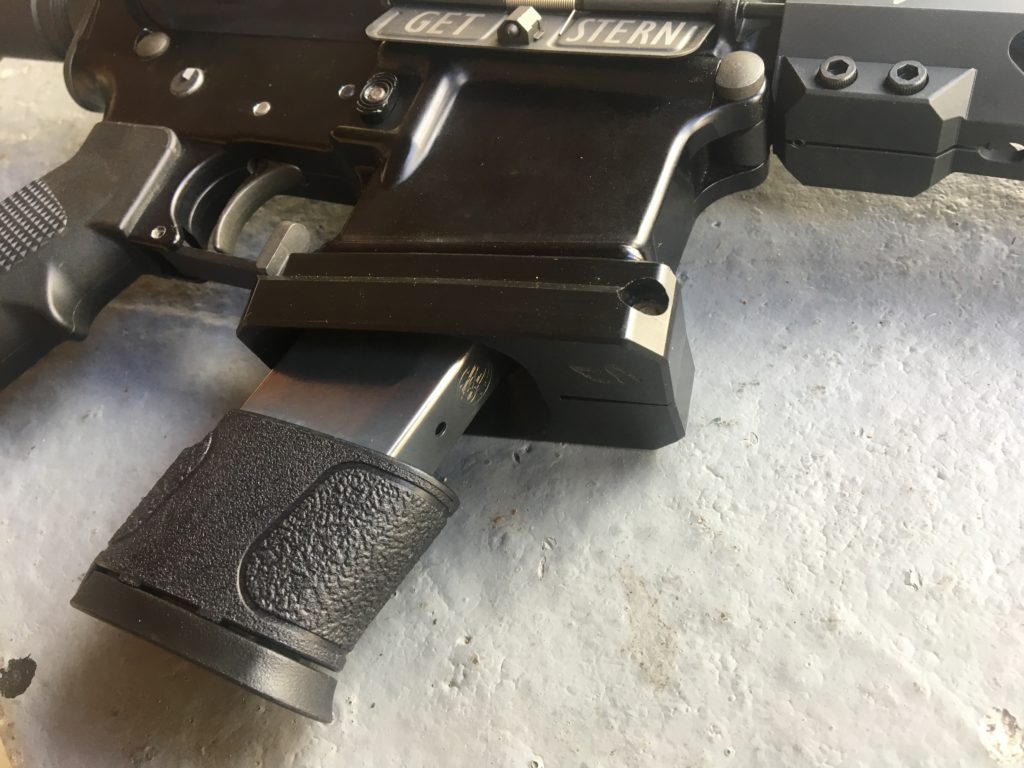 I got to shoot the Stern 9mm Glock adaptor at TriggerCon. It ran great, but could they pull off a .45? Manufacturers have been trying to build a .45 ACP version of the AR for years with varying levels of success. Stern makes conversions that work in 9mm, .40 S&W, and .45 ACP.

Many of you reading this have stripped AR lowers in the closet that you never built because you had all the .223 action you needed. If you don’t already have an AR lower, the market is filled with them at all prices points, complete or ready-to-build.

Here is the perfect excuse to build the pistol caliber AR you always wanted. If you only have one AR, in one minute, you can change the upper, buffer and add a mag-well adapter. You now have a new gun, unlike any of your other ARs, which uses pistol magazines you likely already have. 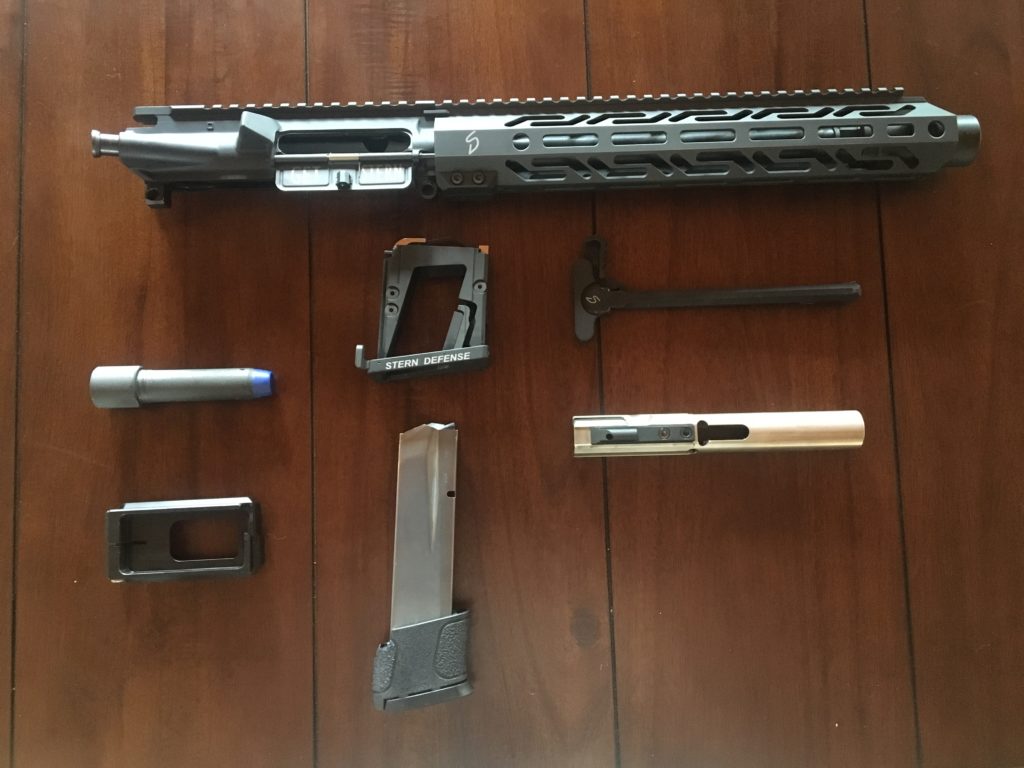 These are the parts you need to convert your AR lower.

I have worked with several AR conversion systems, but there is nothing like Stern Defense. I got their MAG-ADMP45 conversion kit with adapter, complete .45 caliber upper and their 11-ounce carbine buffer.

If you want to build a custom upper instead of the Stern conversion kit, there are many parts common to the AR. In addition to a complete lower with an 11-ounce buffer, you have to select an upper with an oversized ejection port, bolt, and barrel to make these guns run. You can buy bolts and barrels from Stern separately. It is critical that you use an 11-ounce buffer or heavier.

The big question; Do they work? When I got my conversion kit, I built as a pistol on an AR lower. I read the instructions and adjusted the three screws. The adapter was locked up tight. I oiled the bolt, checked it with a magazine, threw in the 11-ounce buffer and cycled some dummy rounds. This was too easy, I was wondering if I was doing things right. Everything went right together and cycled perfectly. 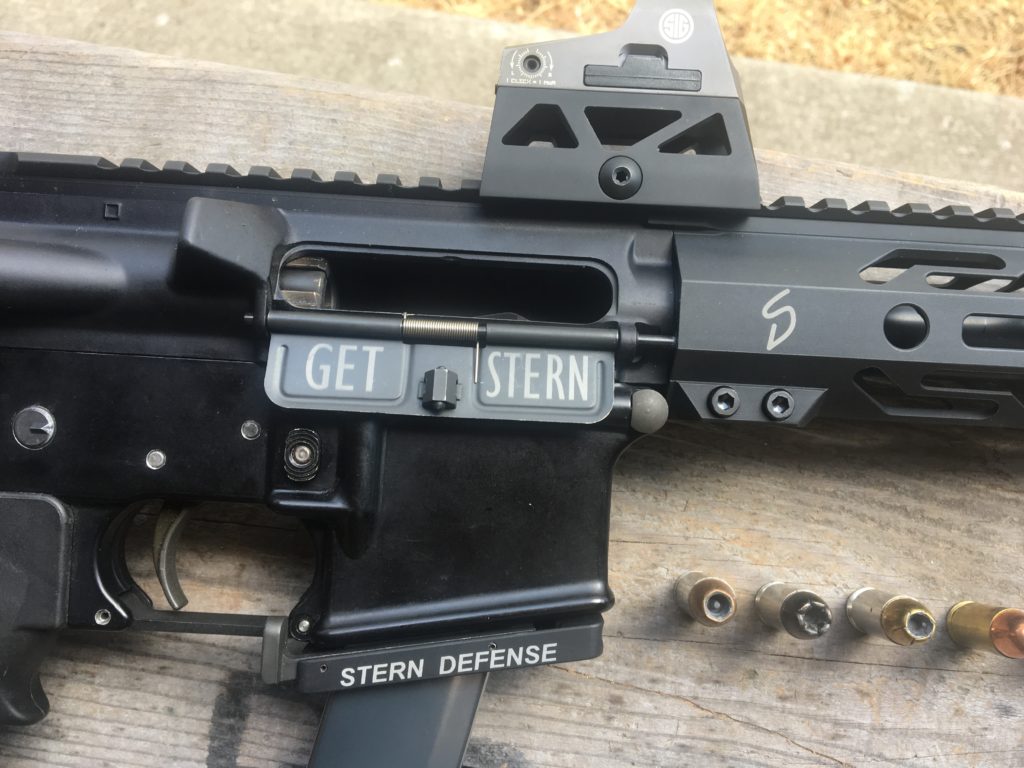 I put a SIG Sauer ROMEO3 Mini Reflex Sight with a riser mount on top. Designed for use on ARs, rifles, shotguns, carbines and full-size handguns, the ROMEO3 seemed like the best bet for a .45 AR pistol. It is fast pointing, has adjustable brightness and excellent light transmission with no distortion. Perfect for a ready gun, the Motion Activated Illumination (MOTAC™) shuts down when there is no activity and powers up when sensing motion. When the batteries do run out, a side-loading CR-2032 battery pops right in.

I was skeptical about reliability. Putting .45 rounds into an AR is a tough technological challenge. I rounded up .45 ammunition. Most of what I had was left over lead reloads from competitive shooting. I also had a mixture of self-defense loads and ball ammo. 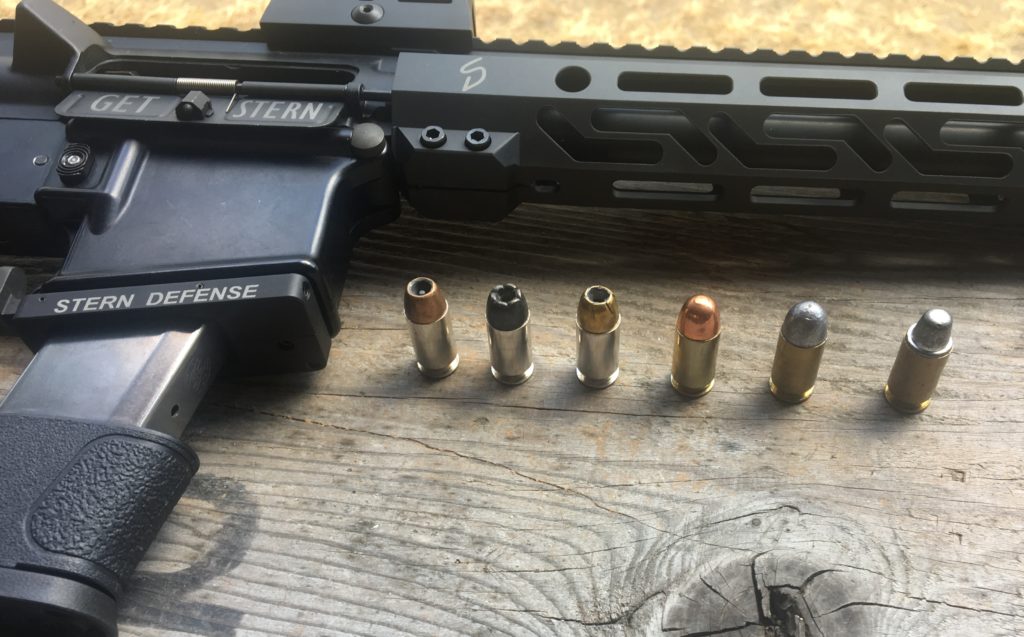 Over several range days, I have put 1000 rounds of .45 ball, truncated cone and JHP through it so far with no jams (there were two failures to feed directly caused by corroded ammo) and no issues. I did have some flat faced wadcutter ammunition which did not feed at all, but it probably wouldn’t run in a 1911 either.

The Stern pistol was reliable beyond my expectations. The adapter fits snugly and it runs smoothly using S&W factory extended magazines. 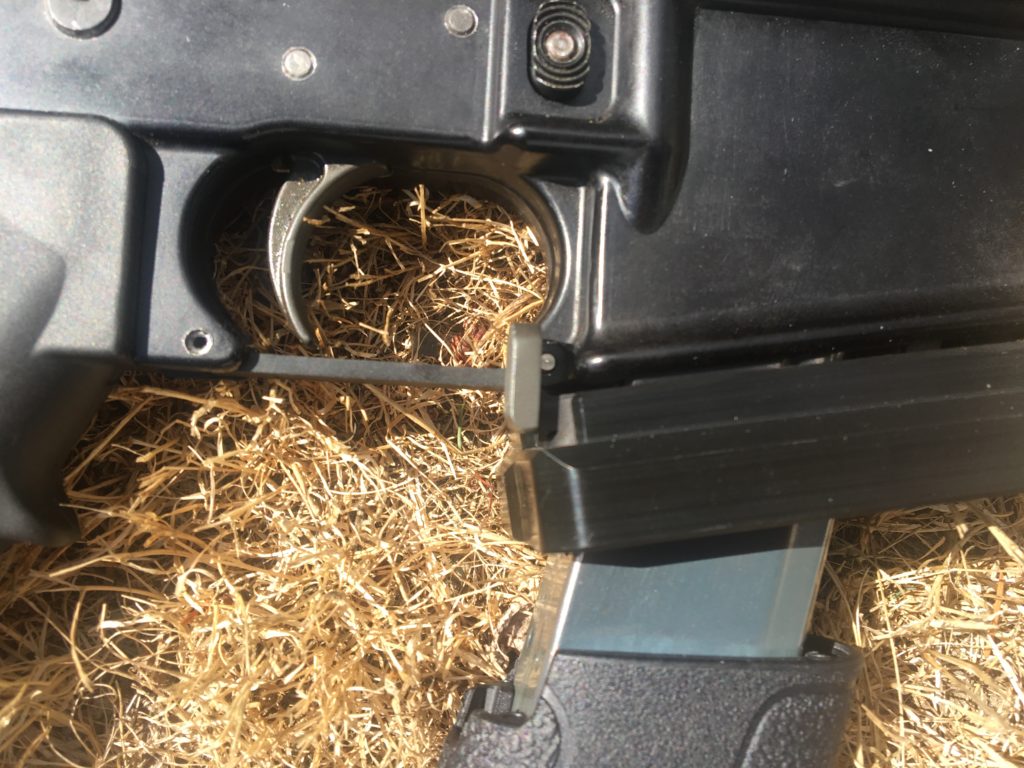 The adapter has a separate magazine release at the bottom manipulated with your trigger finger. There an optional extended polymer magwell that clamps on and speeds up reloads. 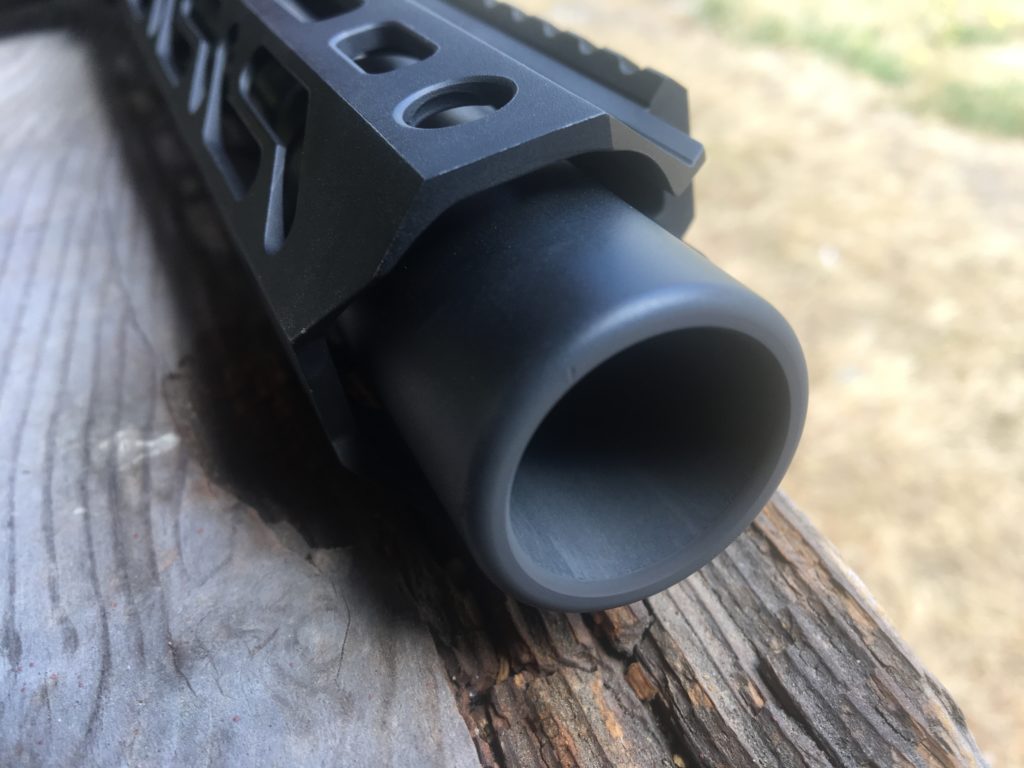 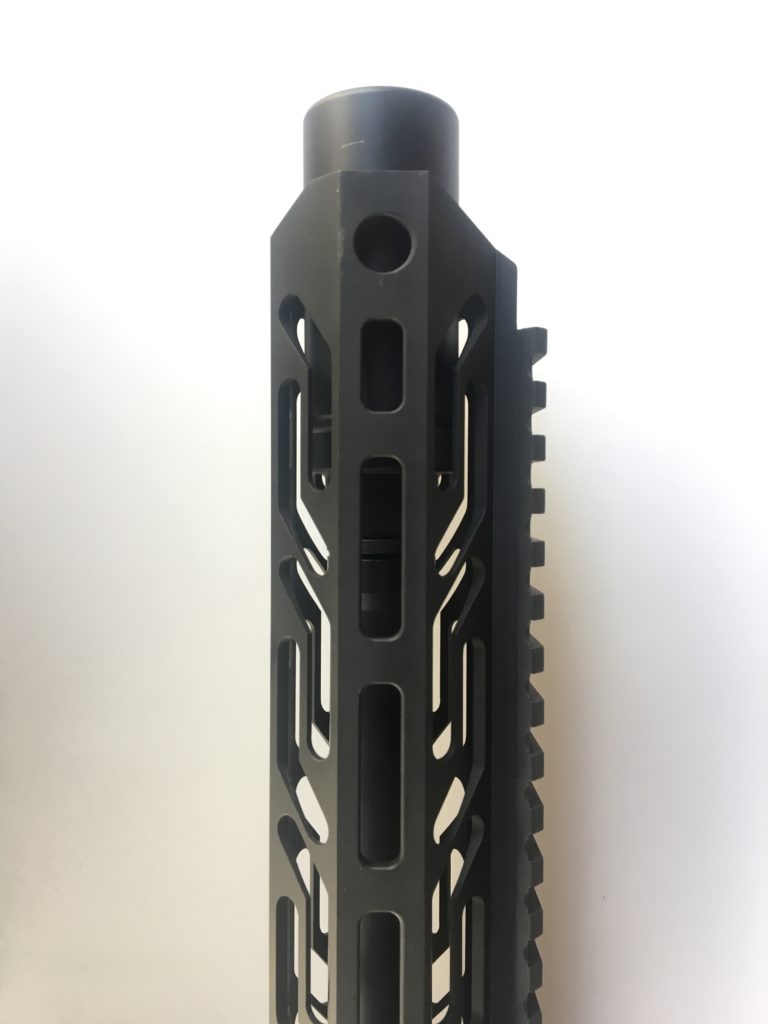 The muzzle looks great with the flush esthetic that I prefer. The hand guard is light and dissipates heat well. 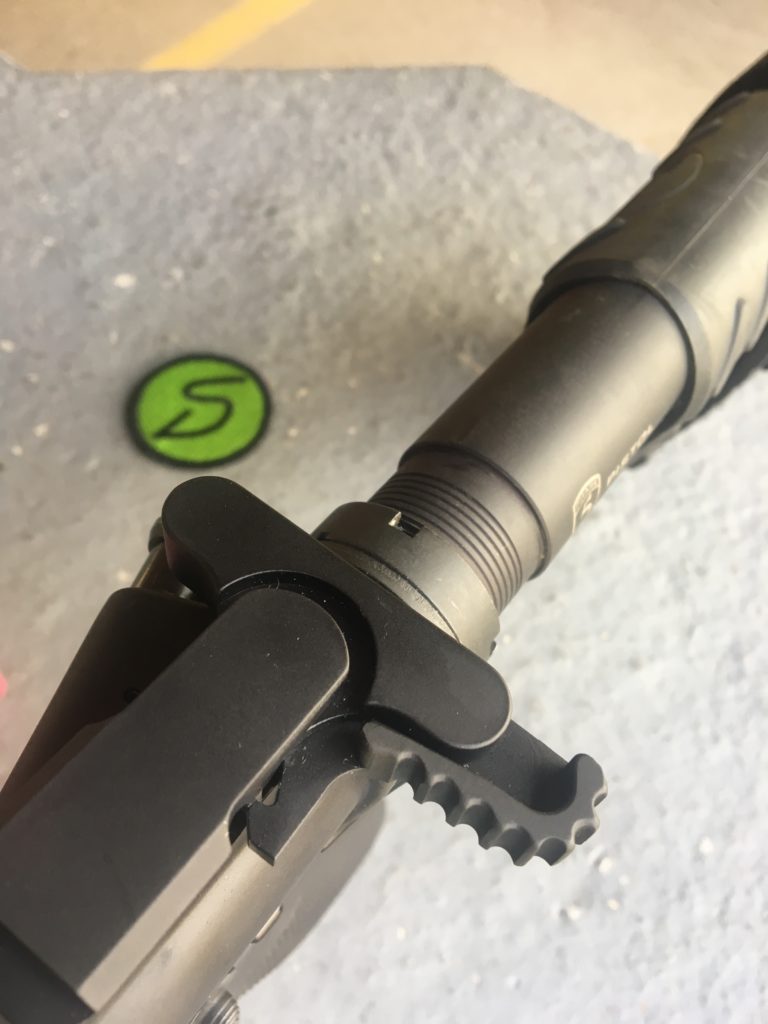 The recoil is effectively managed with the heavy buffer. I wouldn’t even think about .45 with anything lighter. The recoil is more than .223 but less than 7.62 x 39. It is very manageable and not unpleasant. 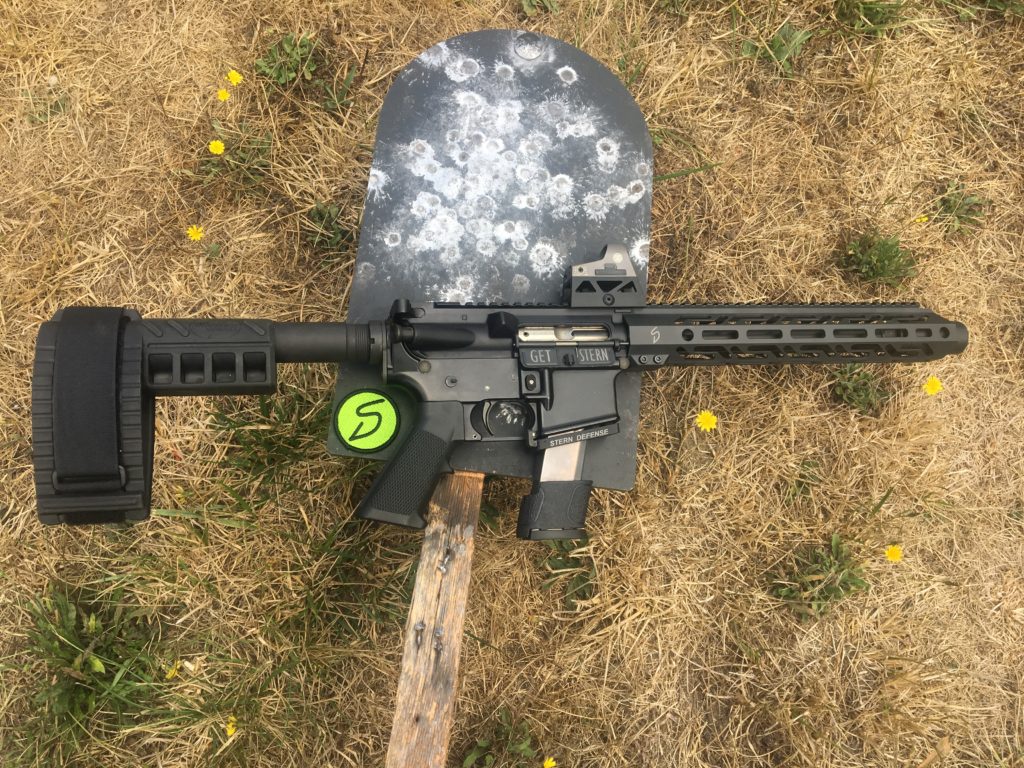 Shooting standing off hand out to 100 yards was no problem. This CTS steel gives great feedback and it really rings when you hit it with .45 ACP.

I did most of my shooting on a CTS Tombstone Rifle Target. Rated at AR500 it is overkill for .45 ACP but I want to shoot this target for years to come. It is big enough to do practical drills at 100 yards and it rings loud enough to hear that far wearing hearing protection. 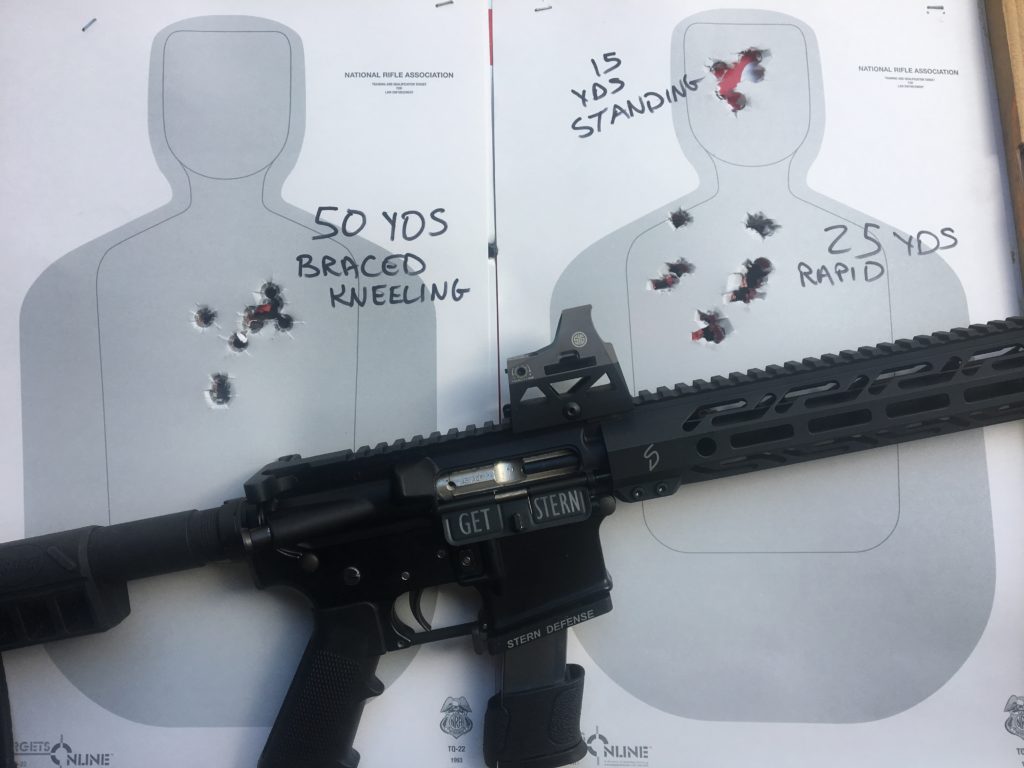 Accuracy is more than adequate for home defense of a police patrol rifle.

I didn’t want to change targets to get feedback for 1000 rounds but you can’t just shoot steel, you need to get on paper to check accuracy. I didn’t do anything special, these targets show that the Stern conversion can outshoot my capabilities to hold a group. 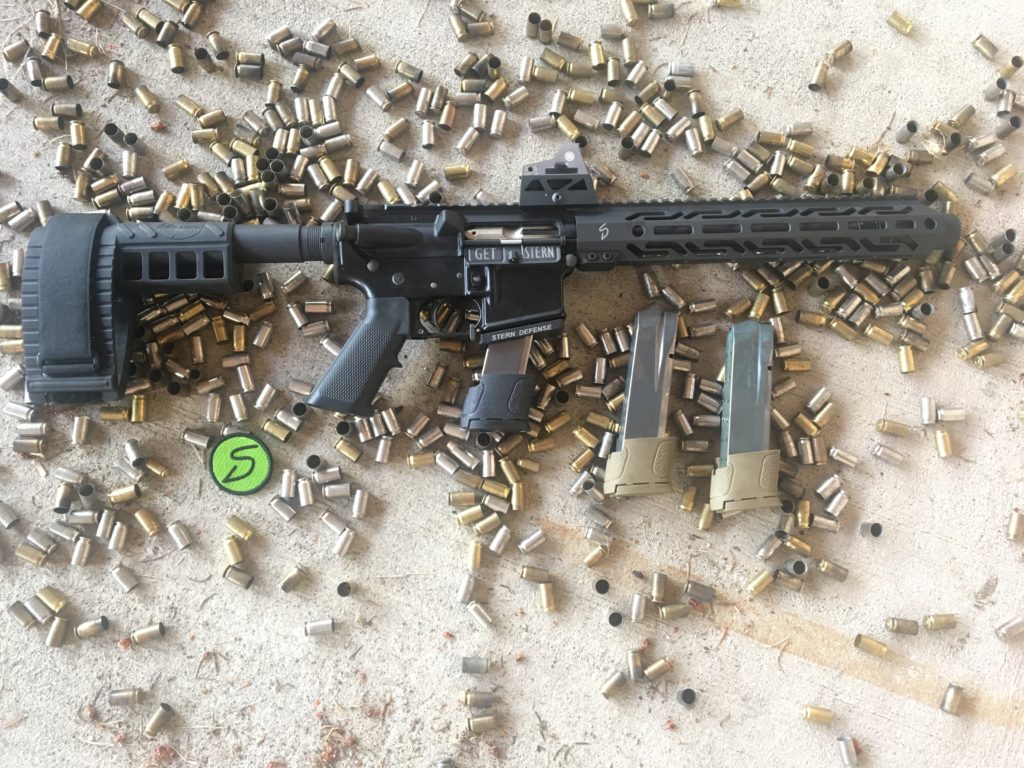 The 11-ounce heavy buffer is vital for .45 systems and works great with smaller calibers. It not only reduces felt recoil, but it also allows for reliable function on pistol caliber AR systems. MSRP $56.00

⦁    All lower components besides the adapter remain stock

Stern Defense makes AR Pistol Caliber Carbines easy and affordable. Stern has all the parts you need to turn your AR Lower into a Pistol, SBR or PCC. Make sure your build meets all legal requirements, it can be tricky.

You can get your very own Stern Defense Magwell .45 Adapters HERE MSRP $186.99

***Shop GunsAmerica for an AR lower***

Next post: SIG TREAD Rifle: Tailored Upgrades for Under $1000