US Palm is Back, Thanks to Century Arms International 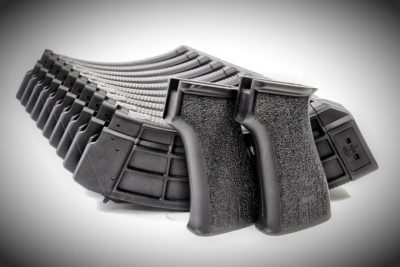 US Palm magazines and grips are back! (Photo: US Palm)

In a surprise announcement, US Palm is back in business thanks to Century Arms International. The Florida-based company is best known for their AK-pattern guns and surplus arms and accessories. Now they’ll be known for helping make what many consider to be the best 7.62x39mm AK magazines on the market.

The merger will keep US Palm owners and designers in place as their steel-reinforced polymer magazines go back into production. Century will showcase the parts on their rifles and pistols going forward.

“In this area of brand acquisitions and company mergers, there are some brands and products that need to be kept alive and untainted, US Palm is a perfect example,” said Century marketing director Chip Hunnicutt. “As a leading seller of AK rifles for nearly forty years, Century feels it is important to keep US Palm’s brand and level of craftsmanship in producing quality magazines and grips alive, so consumers won’t have to settle for imitations or knockoffs.”

“Working with the original brand co-owners and designers, US Palm legacy magazines, instantly recognizable by their distinctive waffle and tread design, and US Palm grips favored for their exceptional ergonomics, will still be available under the original brand while staying true to their authentic vision,” he added. 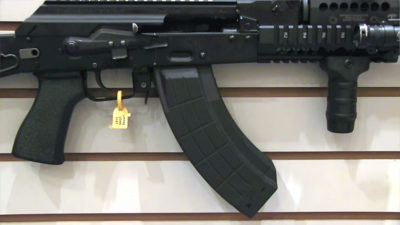 This early quad-stack magazine holds 45 rounds in a package just slightly shorter than a standard 30-round magazine. (Photo: MAC)

As a bonus, this will let US Palm continue to develop some of their other prototypes. Back in 2012 US Palm announced two interesting quad-stack 7.62×39 magazines, one 45-round about the same length as a standard 30-rounder and a 30-rounder the size of a 20-round “tanker” mag.

Unfortunately, these never went into mass production. Hopefully with Century’s support products like these will finally see the light of day.

“We’re really excited that we were all able to make this happen and to see US Palm continue to deliver the highest quality AK accessories,” said US Palm founder and co-owner Rob Anderson. “Century’s significant history with the AK platform made them a logical fit for this effort and their energy regarding this project and insistence on sticking with our original vision has been impressive.”

“The fact that we are heavily involved in this process and not simply being swallowed up by a massive corporate conglomerate was very important to us,” said Anderson. “We can’t wait to see where Century takes US Palm in the next chapter of its life.”

US Palm plans on attending this year’s Red Oktober next month. They will also have a booth at next year’s SHOT Show.

“It’s important to us that our supporters and the shooting community at large know this is a direction we not only support, but are excited about,” said co-owner Brandon Finch. “Red Oktober has become an impressive gathering for AK enthusiasts and a logical place for us to close out the year and set the stage for US Palm’s new beginning.”

Next post: Vice News Says, ‘Don’t Ban the AR, Require Insurance For It’