The Importance of A Good Stiff Belt 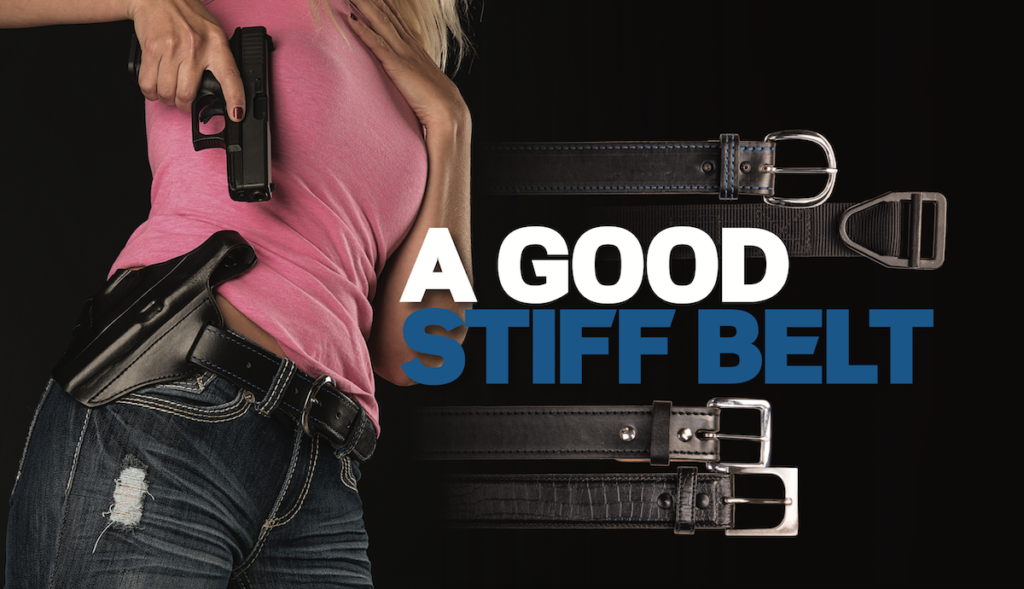 Editor’s Note: The following is a syndicated article by author Tamara Keel that first appeared in USCCA’s Concealed Carry Magazine Volume 10, Issue 5 July 2013 under the title, “A Good Stiff Belt”

I was a gun owner for some years before I seriously began carrying a pistol, which is my excuse for coming late to the following very important revelation concerning concealed carry: Some of the most important parts of your carry gun aren’t necessarily on the gun.

When I was just throwing a small revolver in my purse or leaving it in my car on those nights when I had to work late, I never really gave much thought to its accessibility. Looking back, the gun may have made me feel safer but I’m not sure how quickly I could have gotten to it had I needed it.

When I started working in a gun store, I decided to wear a pistol on my belt while I was behind the counter, and purchased a Glock 23 and a nice Bianchi 81 PDQ holster.

It seemed heavy and floppy and was always banging against my elbow or trying to drag the right side of my jeans down. I waited until after I’d walked through the doors at work to reluctantly thread my heater onto my belt, and I couldn’t wait to take it off at the end of the day. My cute, stylish, on-sale-at-The-Gap belt was in no way intended to support the weight of a loaded pistol and a metal-lined, double-layered cowhide holster.

The thin and decorative belts in question were rarely much more than an inch wide, while the tunnel loops of the PDQ holster were cut to accommodate a one and three-quarter inch duty-type belt. My pistol pitched and rolled on my belt like a rowboat in a North Atlantic gale.

It was by accident that I solved my problem. I had traded the Glock for a SIG, which necessitated a new holster, and said holster just happened to have one and a half inch loops. At almost the exact same time, I picked up a wider, thick leather belt from (don’t laugh) The Gap. The difference made by a holster and belt combination that didn’t allow the gun to shift, flop and slide was amazing.

After that revelation, I started shopping for belts expressly designed to hold a holstered pistol, and have worn guns much larger and heavier than that old Glock 23 in complete comfort. In fact, I’ve been known to find myself napping atop a pistol having forgotten I was wearing it.

Make sure your belt width matches the size of your holster’s loops to keep the gun from rocking back and forth. Look for a reinforced belt to keep the pistol from flopping out and away from your body. A contoured belt will distribute the weight more evenly and make it even more resistant to rolling over or under the gun.

Like I said at the start: One of the most important parts of your carry gun isn’t part of the gun.