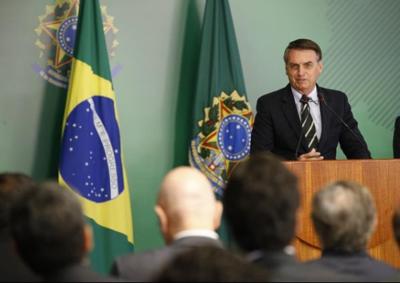 President Jair Bolsonaro speaks during a public ceremony at which he signed a decree making it easier for Brazilians to own guns. (Photo: Bolsonaro/Instagram)

President Jair Bolsonaro signed a decree on Jan. 15, 2019, making it easier for many Brazilians to own firearms. Bolsonaro signed the decree in a televised ceremony.  By taking decisive action within 15 days of being sworn into office, Bolsonaro gives a strong indication that he intends to follow through on his campaign promise of combatting Brazil’s violence problem by putting guns in the hands of the “good guys.”

“To guarantee the legitimate right of defense, as president I am using this weapon,” Bolsonaro said as he held up the pen he used to sign the decree. “I signed this decree, created by many upstanding people, so that at this first moment, upstanding citizens can have peace inside their homes,” Bolsonaro explained.

The decree eliminates the need for private citizens to provide the police with a good reason before they can own a firearm.  Almost any citizen can now own a gun as long as they meet certain conditions.  The conditions include being responsible for a commercial or industrial establishment, being a gun collector or hunter, living in a rural area, or living in a city with elevated crime rates.  The decree does not allow people to carry a firearm in public, something that only security personnel, police and members of the military are allowed to do.

The decree includes a provision extending the registration renewal period from five years to ten, and requires that gun owners have a safe with a key if children, adolescents or a person with a mental disability live in the home.

In addition, gun owners will have to meet other requirements such as being at least 25 years of age, not having a criminal record, taking a psychological exam, and taking a course at a gun club.

Some have criticized Bolsonaro’s decree. They argue that increasing gun ownership will increase the amount of violent crime in Brazil. History suggests otherwise.

In 2012, when Venezuela enacted a Disarmament Law which banned the private ownership of firearms, the country saw increased criminal activity and violence.