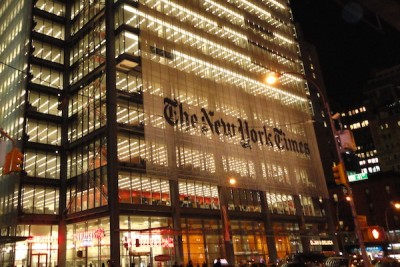 Gun collectors, competitive shooters, and hunters frequently purchase multiple firearms in a short span of time, especially during the holiday season. But a new column from the New York Times argues that credit card companies should monitor those purchases and report them to law enforcement officials as a way to prevent mass murders.

“If banks chose to use the systems they already have in place, they might decide to monitor such customers, perhaps preventing them from buying multiple guns in a short period of time,” columnist Andrew Ross Sorkin wrote in a piece published this week.

Sorkin claims to have reviewed “hundreds of documents” proving that eight of the 13 most deadly mass murderers in the past decade used credit cards to stockpile weapons, ammunition, armor, and gas masks. He believes credit card companies should use their fraud tracking systems to track “suspicious activity” involving firearms and firearm-related equipment.

“They have all the infrastructure in place,” Joseph Moreno, a former federal counterterrorism prosecutor and a staff member of the F.B.I.’s 9/11 Review Commission, told Sorkin. “A.T.F. is already involved in S.A.R.s task forces,” he said, referring to suspicious-activity reports. “It would just be tweaking it to consider firearm-related information.”

Sorkin points to James E. Holmes, the man who murdered 12 people at an Aurora, Co., movie theater, noting that he used a Mastercard to purchase $11,000 in “weapons and military gear” in the days leading up to the massacre. Along with a Glock, a shotgun, and an AR-15, Sorkin lists “paper targets” and a “shotgun sling” among the items credit card companies should begin tracking.

For their part, credit companies (for now at least) appear unwilling to begin tracking and reporting legal transactions.

Sorkin laments that “virtually none” of the major credit companies were willing to speak on the record “for fear of upsetting gun-rights advocates and politicians invoking the Second Amendment.”

“Some raised the prospect that by trying to help they would be held responsible if the system failed,” Sorkin noted. “Others made a slippery-slope argument: If they were to police gun sales, should they do the same for alcohol in an effort to prevent drunk-driving deaths?”

Visa spokeswoman Amanda Pires, for example, told the Times that “we do not believe Visa should be in the position of setting restrictions on the sale of lawful goods or services. Our role in commerce is to efficiently process, protect and settle all legal payments. Asking Visa or other payment networks to arbitrate what legal goods can be purchased sets a dangerous precedent.”

Still, the financial industry has caved in recent months to social pressure from anti-gun groups. Both Citigroup and Bank of America placed restrictions on the types of firearms and accessories sold by its lending partners, and big investors have pressured gun manufacturers to adhere to “gun safety” principles.

At this point, it’s anyone’s guess whether the credit card divisions of these companies will begin reporting gun owners for purchasing too many firearms – or paper targets – at a time.