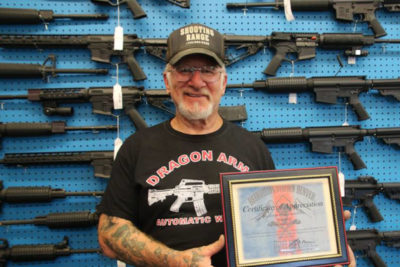 Mel Bernstein of Dragon Arms in Colorado Springs wants to be sure the rabbis in his community will have the means to defend themselves. (Photo: Dragon Arms Facebook)

To Mel Bernstein, owner of Dragon Arms in Colorado Springs, storing an AR-15 in a synagogue is as common sense as any other safety measure. And in the wake of a massacre in Pittsburg that left 11 Jews dead, he’s putting his money where his mouth is.

“I don’t really like what’s going on in the country,” he told KOAA. “And I’m offering them a free AR-15 rifle with two magazines and 100 bullets.”

To those who would balk at an AR-wielding rabbi, Bernstein pointed out that a rifle in the right hands is no different than any other safety tool.

“There’s a fire in a synagogue. What do you grab? A fire extinguisher,” he said, demonstrating for a local reporter. “Ok, let’s say someone comes in and starts shooting everybody. What are you going to grab? You grab your AR-15 or a rifle or a handgun. You have to have a tool to fight back.”

SEE ALSO: Jews Speak Out on Guns and Pittsburgh

Fox News reported that four local rabbis have accepted Bernstein’s offer and one has accepted a handgun instead. But not every synagogue leader is on board.

“I think he’s absolutely generous in what he wants to do. I think he wants to help and is very well-intentioned,” Jeff Ader of Temple Beit Torah told KOAA. “It just isn’t for us.”

“If it can fire multiple rounds per second, anything can happen and my fear is that innocent bystanders get in the way and innocent people get hurt,” he said. “Arming people is a preventative measure. It is not part of the solution at all. The solution is civil discourse.”

Ader did admit, however, that he’s talking with Bernstein about purchasing a handgun.

Another synagogue-goer, who asked KOAA to remain anonymous, echoed Ader’s sentiment. While she believes an AR-15 is “too big” to be used in a synagogue, she didn’t have a problem with a rabbi having a handgun. In fact, many of the people who attend with her already carry weapons when they attend services.

Other Jewish leaders have been more forceful in their support of armed self-protection.

“Jews cannot disarm themselves in synagogues or anywhere else for pacifist or utopian reasons because enemies will always seek to exterminate them. Even one armed Jewish man or woman in that synagogue could have made a positive difference,” said Dov Marhoffer, a Holocaust concentration camp survivor and Advisory Board member to Jews for the Preservation of Firearms Ownership.

“Jews have no choice except to assume personal responsibility for having and using firearms to protect their own lives, their families, and their communities,” he concluded.

Next post: Hunting Black Bear in Western Idaho with Hounds