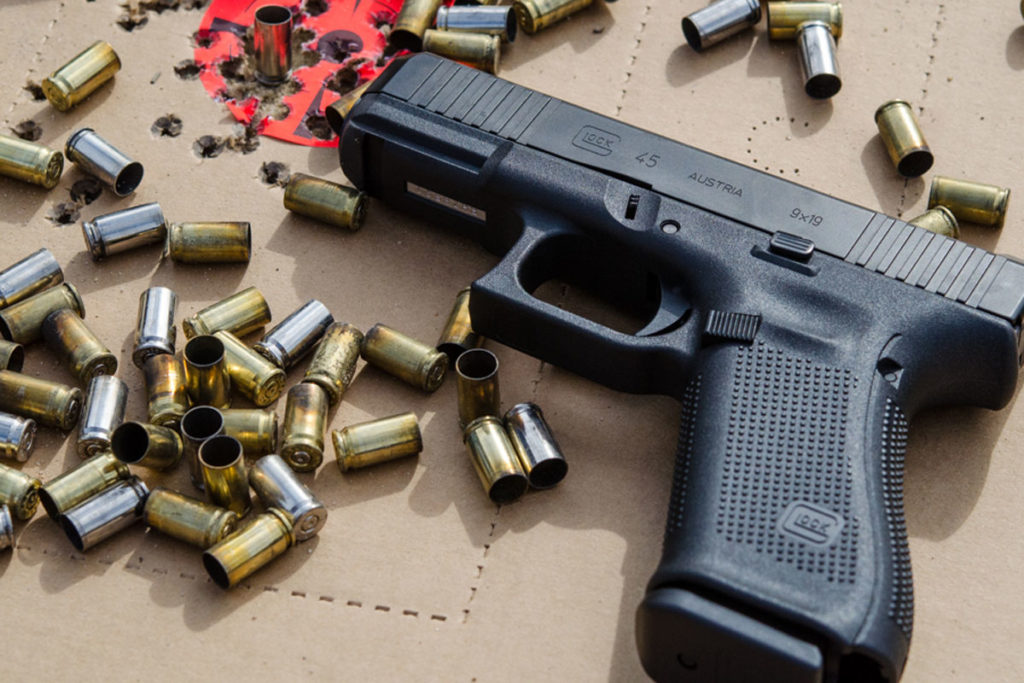 I’m not a cop. Never been one. Never played one on TV. And while I fully understand why this new G45 model from Glock, dubbed their “Crossover” pistol, is exactly what some departments have wanted, and what I predict more and more will adopt, I think they’ve struck handgun gold here for the civilian market as well. This baby is a shooter! 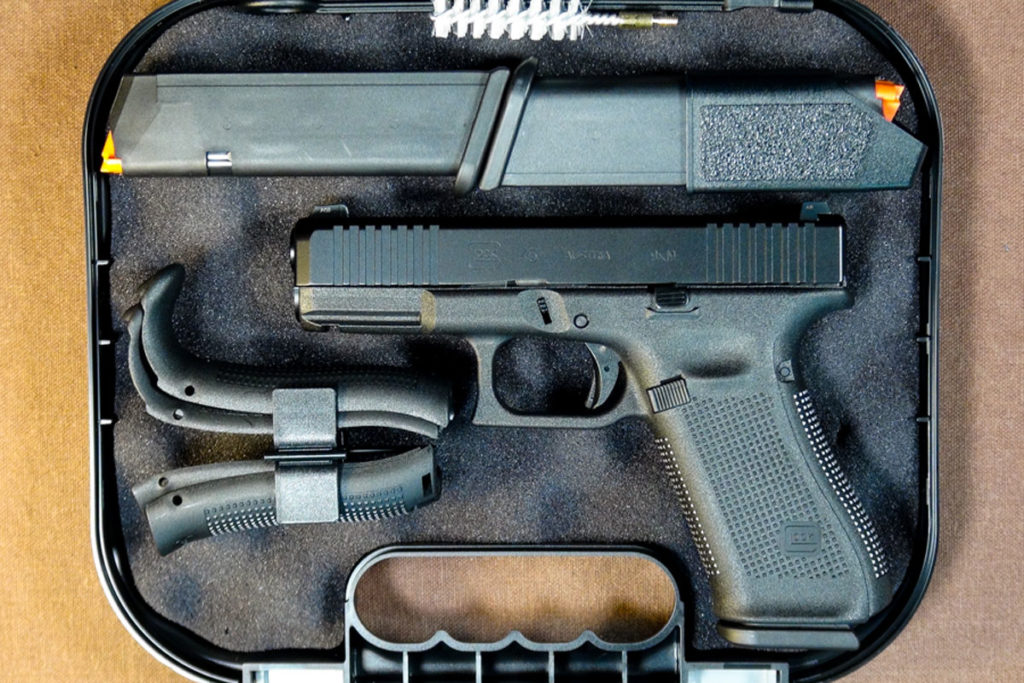 IT’S A THING. HERE’S WHY

First, let’s clear up any stray confusion that might remain in some minds about the configuration of this gun and why it’s practical. The Glock G45 is the same basic configuration as the Glock 19X that everyone slapped their knees and laughed about and then watched Glock sell them like they were a new Elvis record. I have to admit that I scratched my head a bit too until I was educated on the practical advantages of a shorter slide fitted to a full-sized duty grip. Military and LE spend much of their lives behind the wheel of some vehicle – especially cops. Add to that some required body armor and other gear, and having the sidearm shoved up into your lower ribs all day gets old quick. And then there is the tactical matter of having approximately an inch less slide to “clear leather” when drawing the gun from the holster. So, the shorter length pistol with full grip and capacity made perfect sense to me. Concealed carriers – get over it – it’s not always about us. When I got a chance to test the 19X for myself I discovered that I liked it. A lot. But coyote tan with an almost bronze colored slide isn’t for everyone – especially a police department. So, when the requests came in from the LE community for a similar gun in basic black with a few enhancements, Glock obliged. And so, it came to be that this gun that Glock calls a crossover (a Glock 19 slide on a Glock 17 frame, essentially) is actually a thing. And a fine thing it is! 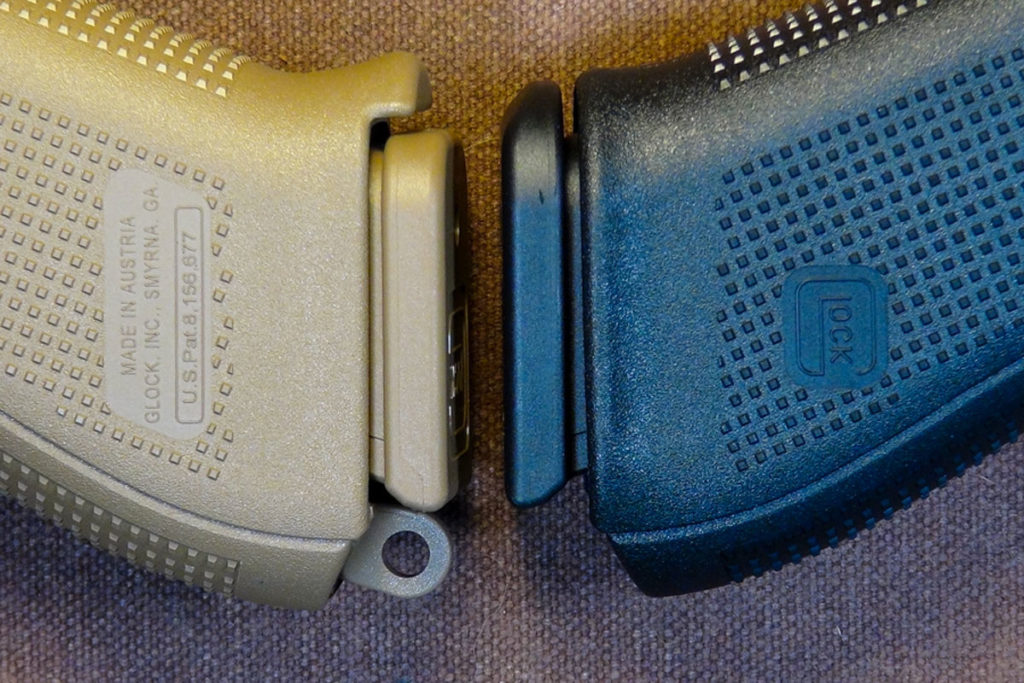 …or poised in the shooter’s grip. 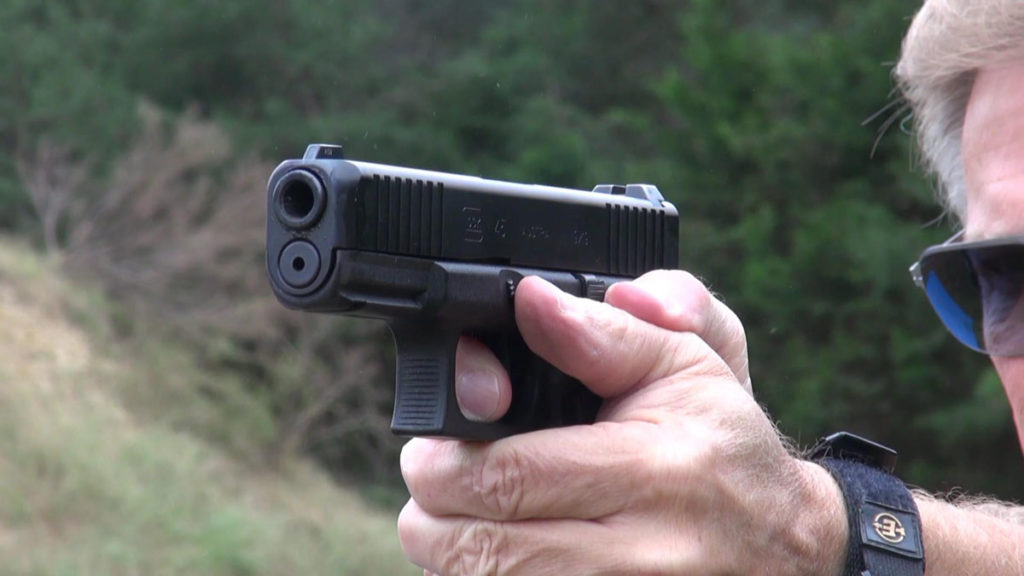 The G45 was the third new model from Glock to be introduced in October 2018 (dare we say… “Glocktober”?) and it was an instant buzz. The G17 and G19 Gen5s in the MOS configuration were the other two. For those two, things were straightforward, but the G45 left just enough room for speculation and imagination. One source insisted that it would have a rotating barrel, similar to the Beretta PX4 Storm. I’ve been through the Glock Armorer certification process enough times to have been very skeptical about that one! No, there is no rotating barrel. 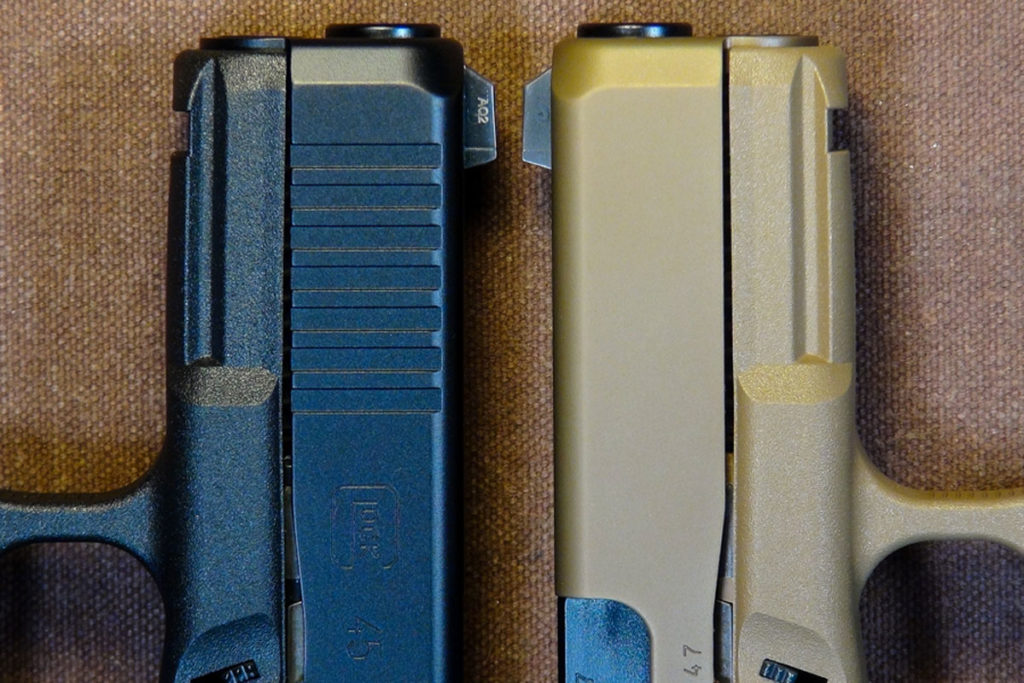 It’s hard not to compare the G45 to the G19X because the similarities are evident. But there are some notable differences that go beyond “yeah, but this one is black”. Let’s take a look at those differences. For starters… yeah… it’s black. My understanding is that this model was requested by law enforcement who saw the benefits of the design of the G19X but didn’t want to get laughed off the street by the color – not to mention giving away the occasional tactical position. So, “make this for us in black and we’ll sign the purchase order,” carries a lot of weight. The G45 adds front serrations to the slide, mirroring those at the rear.

Aside from color, the front serrations in the slide of the G45 separate it from the G19X. Good not just for press checks but to help run the slide quickly in stress or when clearing a jam – especially with an ungloved hand.

The military didn’t want a flared magazine well. The fewer places that sand and other environmental debris can sneak into, the better for a battle weapon. Cops, on the other hand, appreciate the extra speed that the funnel provides when doing combat-style reloads, so the G45 has the magwell.

A clear distinction is the degree of flare at the base of the magazine well of the G45. It’s built for faster reloads, while the G19X is built to keep dirt out. 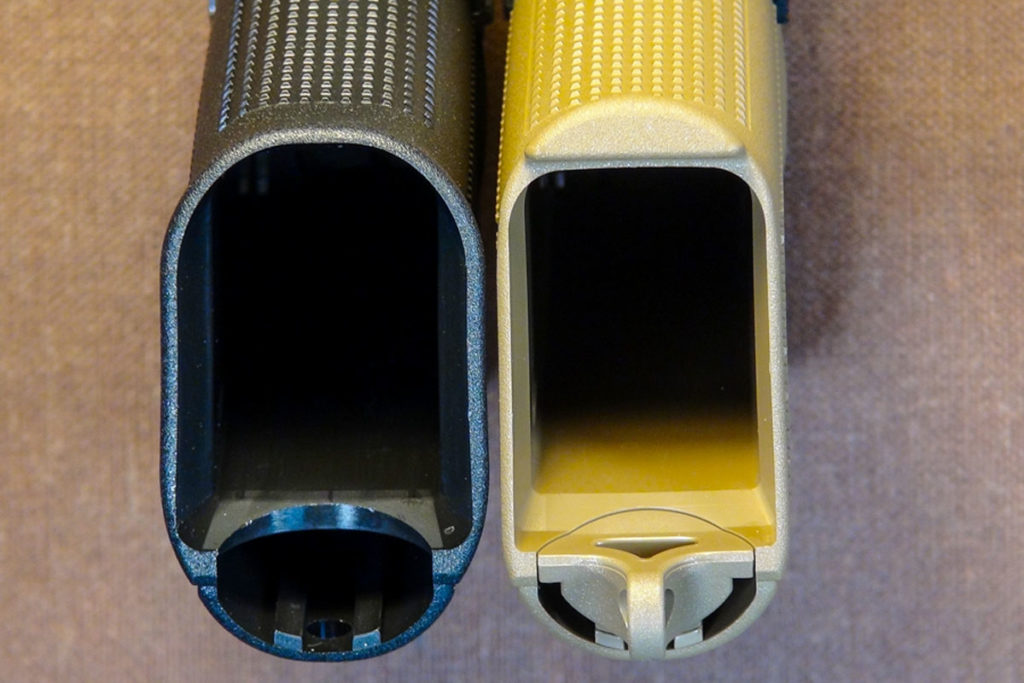 I don’t know whether the request to delete the Gen5 semi-circular cutout at the bottom of the front strap of the grip came from LE or if Glock just noticed the angry mob outside the gate, but those of you that don’t like it will be happy to know it’s gone. The grip remains straight all the way down to the slight flare of the magwell. So, the G45 is a hybrid of sorts between the G19X and other Gen5 pistols in that it has neither the cutout nor the protective lip (which also renders the G19X incompatible with Gen5 magazine baseplates).  The G19X has a snap-in plug at the bottom rear of the magazine housing with a lanyard ring – this is absent on the G45.

Internally, to my knowledge, there are no differences other than a little-known part called the spring cups. The G19X ships with Glock’s maritime spring cups, which are made to withstand corrosion from harsh environments. The G45 has the land lubber’s version. The G45, like all Gen5s, has an ambidextrous slide stop control and the magazine release can be reversed.

The G45 comes with three options for sights, as of this writing. The standard Glock polymer sights, the upgrade to steel Tritium night sights (as tested here), and a set of available aftermarket-style sights that have a fluorescent front sight ring and blackout rear. 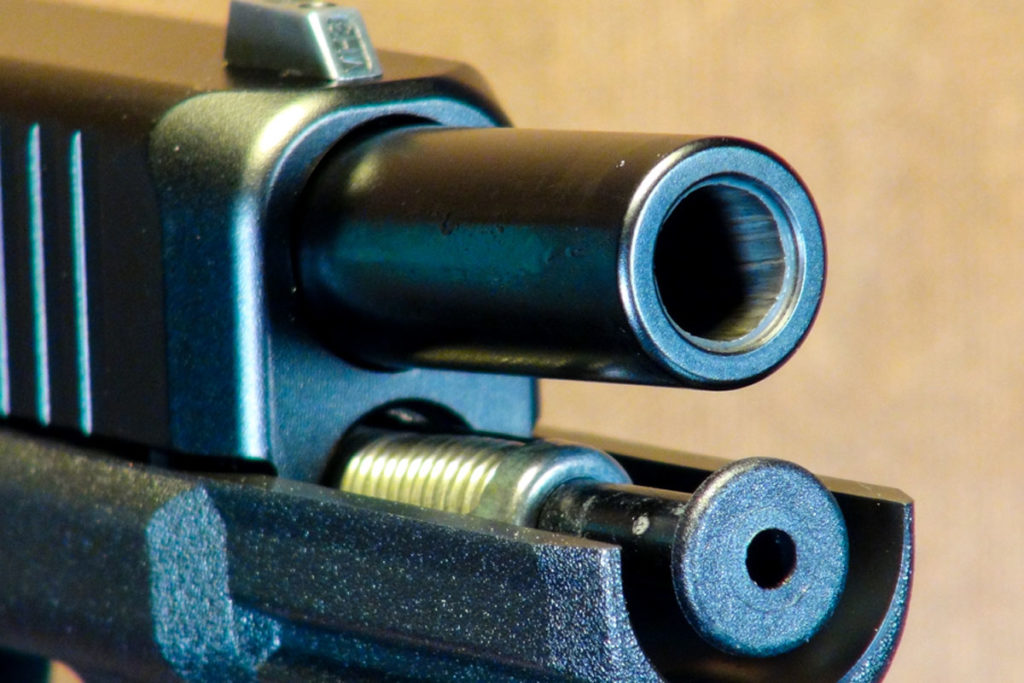 Aside from funneling the magwell of the G45, Glock removed the protective protuberance and deleted the lanyard ring plug. Note the obvious reason why Gen5 magazines are not compatible with the G19X. 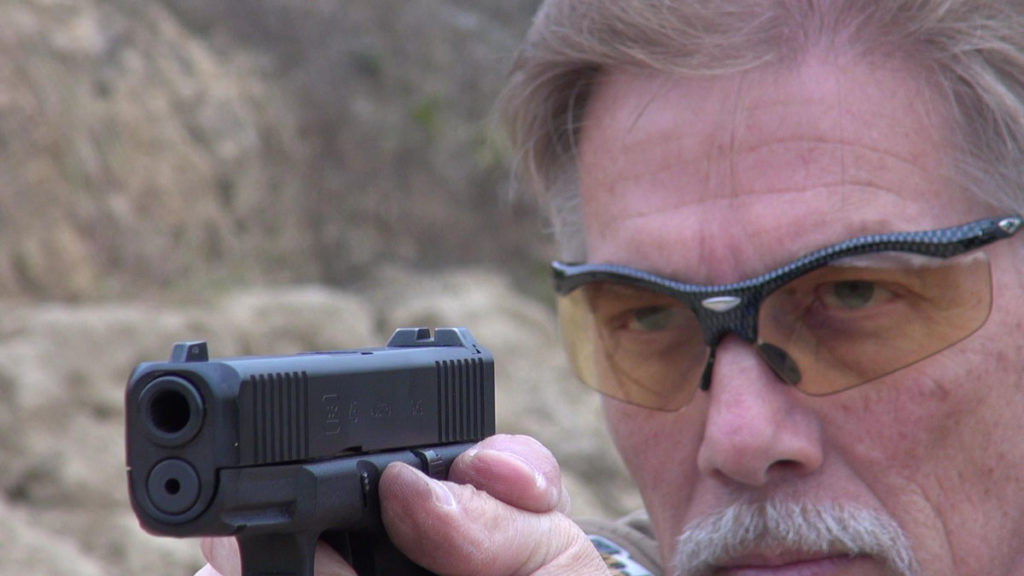 Of all the things there are to talk about when it comes to the new Glock G45, there is no topic more significant than the shooting itself. This is where the crossover design comes into its own. Forget about whether this pistol has flares or serrations, whether it is black or bronze or pink – take one out and shoot it. Like the G19X, which impressed me beyond my expectations a year ago, the new G45 is an amazingly flat and soft shooter. The shorter stroke of the G19 slide combined with the fuller grip of the G17 frame seems to be the Goldilocks configuration. With two hands full of polymer handle (and no finger grooves to boot) the grip is strong and sure, even for the guys with big paws. I heard from several fellow shooters how noticeably better this pistol feels to shoot.

The improved rifling and nicely milled crown of the Marksman barrel help make this gun a real shooter. 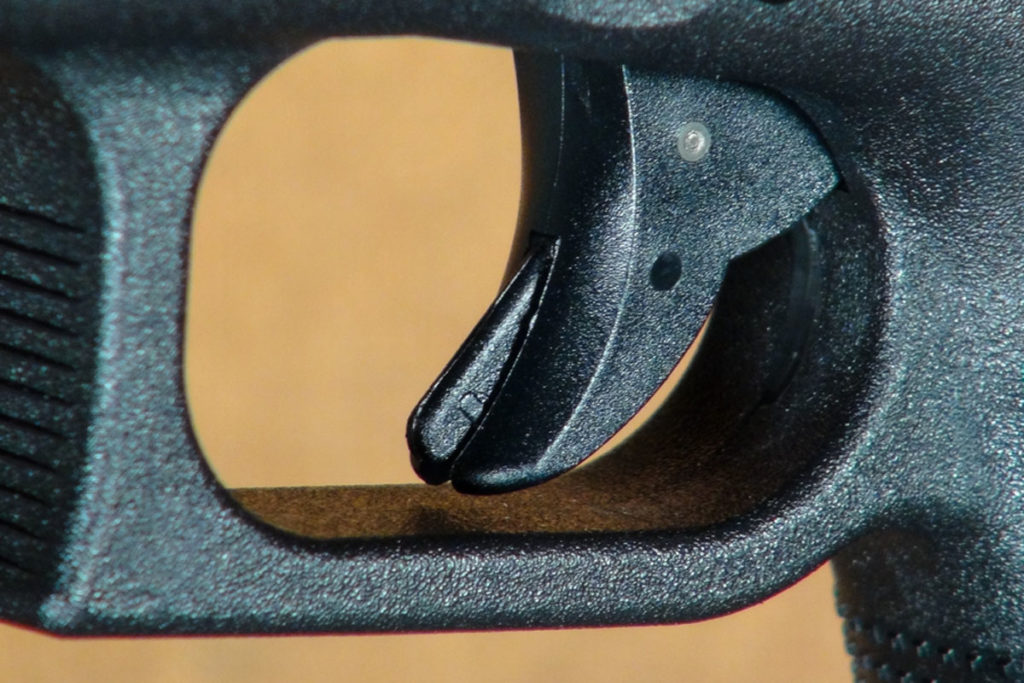 One friend and competitor showed up to the local Steel Challenge match with his new G45 on his hip – and he doesn’t even like Glocks, especially. “This one changes everything,” he said as he racked up sub-3-second strings on the plates. My times were not as impressive, but I ran the gun well and shot it like I’d been training with it all summer. See the companion video for some of that match footage.

Just about 500 rounds of a wide variety of ammo produced excellent results – and zero malfunctions. 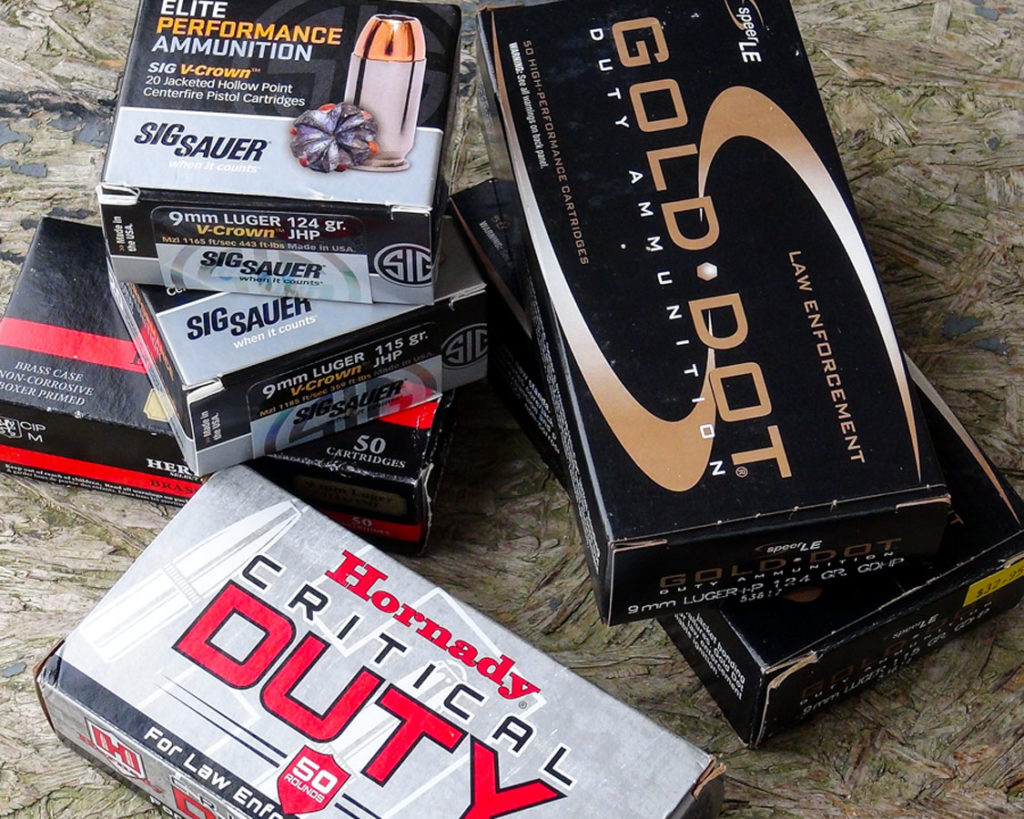 The G45, like all Gen5 Glocks, has the new Marksman barrel. Far from a mere marketing moniker, this new barrel features improved rifling to increase bullet stabilization and accuracy, as well as a nicely recessed crown to preserve that accuracy should the pistol be in a high wear and tear environment… like a duty gun, perhaps. I shot this gun very well off-hand at distances between 10 and 15 yards – usually keeping all the hits in a fist-sized group.

Accuracy was tested using real-world duty and defense ammo, as well as some standard ball.

More formal accuracy tests came in the form of resting the gun in a good rest at 15 yards and feeding six different loads through it – five of those being the bona fide duty and self-defense ammo, including the new FBI selected Hornady Critical Duty in 135 gr. +P. None of the ammo performed poorly, and I’d put each and every one of those groups on my fridge – but the Hornady ammo was bested by both SIG and Speer in this test.

The best group was delivered by Speer Gold Dot LE 115 gr. JHP which included two in one hole. 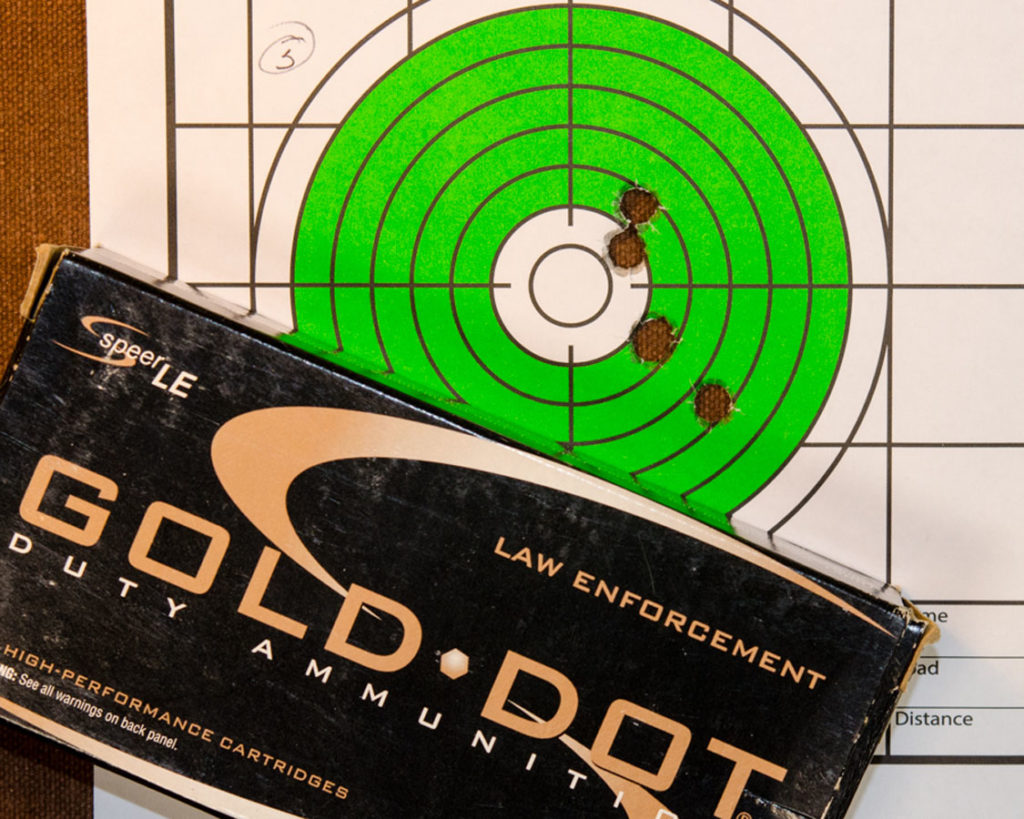 When I saw the first ad for the new Glock G45, I wasn’t surprised at all. The G19X impressed me quite a bit last year, and I knew it would only be a matter of time until a variant of that configuration was offered in a more mainstream package. It also makes perfect sense that law enforcement would be interested in it as a standard sidearm. I’ll bet the departments that switchover will see qual scores increase like a rising tide. The pistol is just a great shooter – there is no other way to put it. 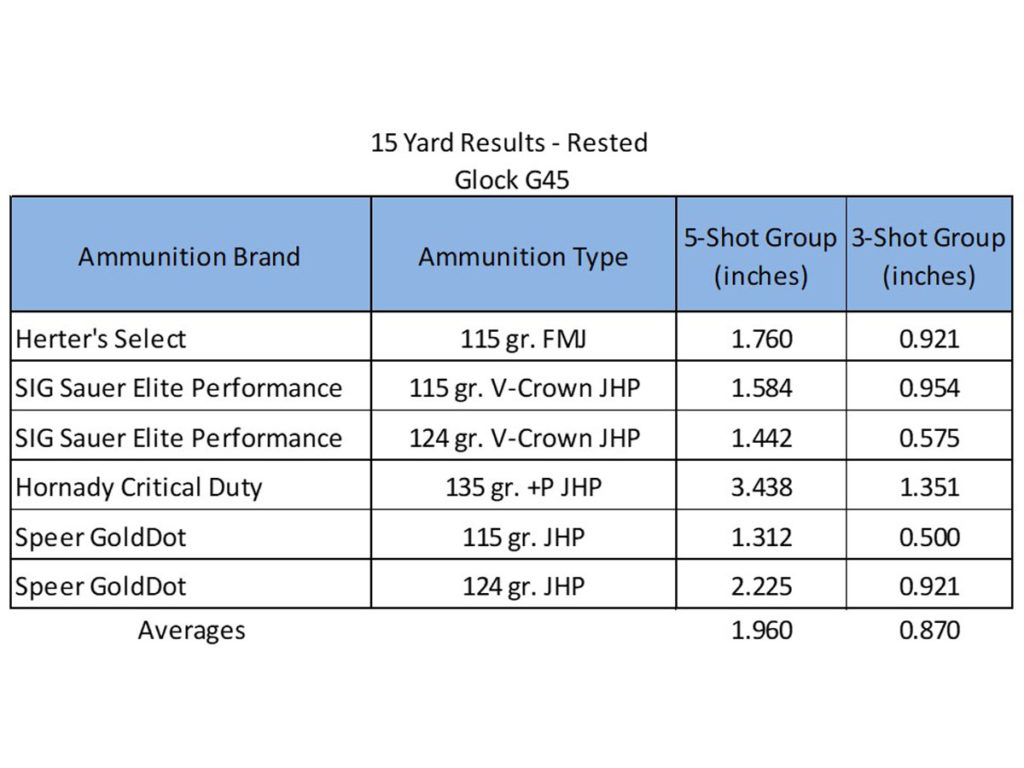 Industry competition, of which there is almost no limit, has really put pressure on Glock to think outside the box-shaped gun. And while the overall silhouette is pure Glock, many things have been changed in response to both LE and civilian market demand. Some changes may seem cosmetic to some and more functional to others, but they are all improvements to the brand. Like most, I’d like to see Glock learn how to number their models better – as I wonder how many times the poor folks at the gun counter have already had to explain to the newbie buyer that this “45” actually takes 9mm ammo.

I think this pistol is going to be a huge hit for Glock. And rightly so. As LE contracts start to expire, look for many departments that had moved away from Glocks to reconsider that move. Civilian sales always shadow LE example, and it will be a strong staple in every gun store inventory. What may have initially looked like a gimmick gun is very likely to become one of the brands best sellers. After about 500 rounds over a two-day period that included lots of Mozambique drills and a Steel Challenge match – and not a single hiccup of any kind, this has become one of my favorite Glocks. It’s ideal for a duty gun. It performs wonderfully as a match gun. And it would be about perfect as a home defense gun. 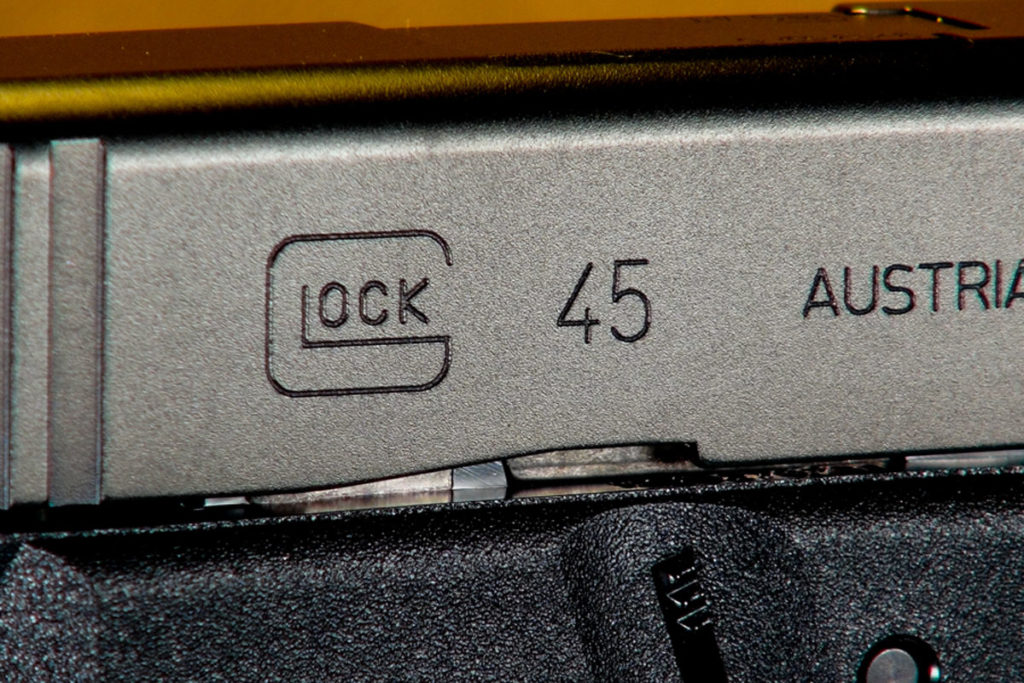 It’s not always what you add, but what you take away that counts. Without finger grooves and now minus the lower cutout, this grip feels fantastic.

Packaging for the G45 is identical to all Glocks from Gen4 on. Three mags and four alternate backstraps are included.

In about a year’s time, we’ve seen the evolution of the Glock grip from left to right. The author thinks the newest is the best. 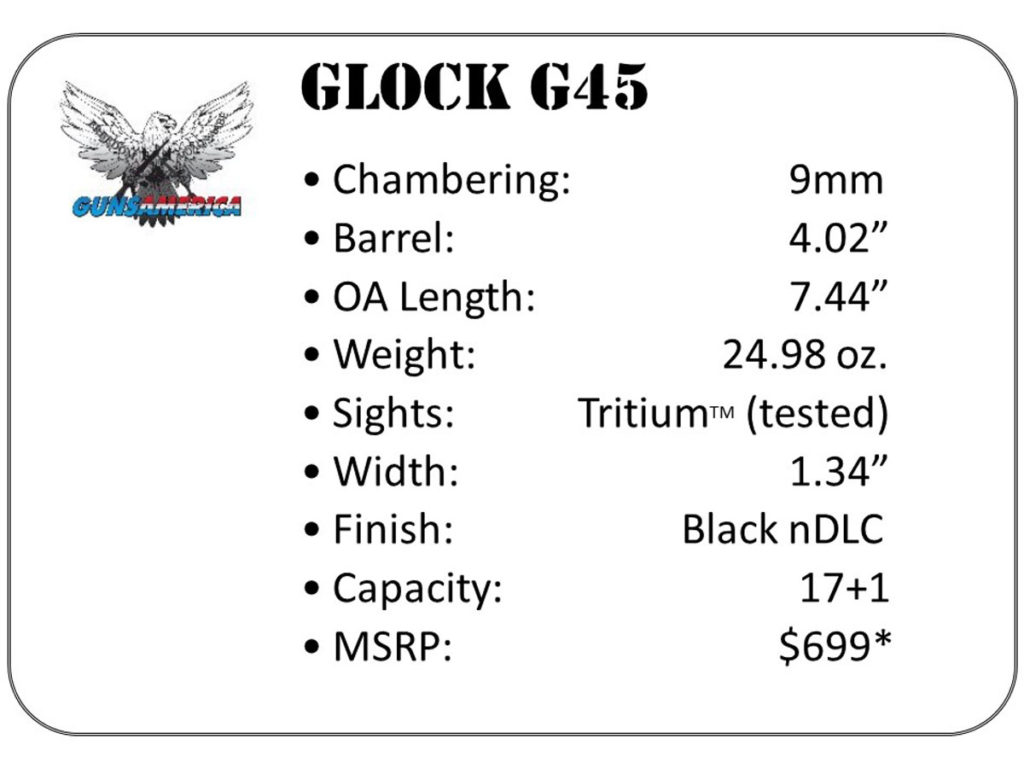 Previous post: Che Guevara and the M2 Carbine: The Gory Death of a Paradox