1LT Waverly Wray and His M1 Rifle: There Can Be Only One M1 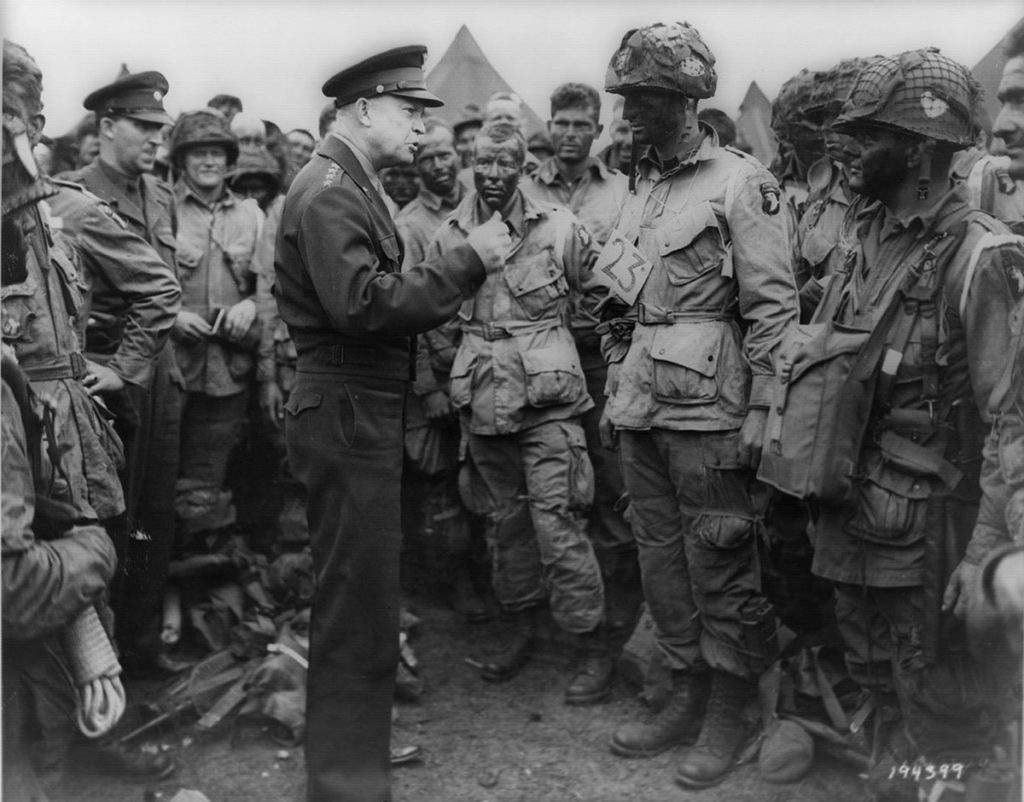 The M1 rifle was used in all theaters of combat during World War II. 1LT Waverly Wray, the airborne officer referenced at the beginning of this article, could be counted among the greatest warriors these United States could produce. 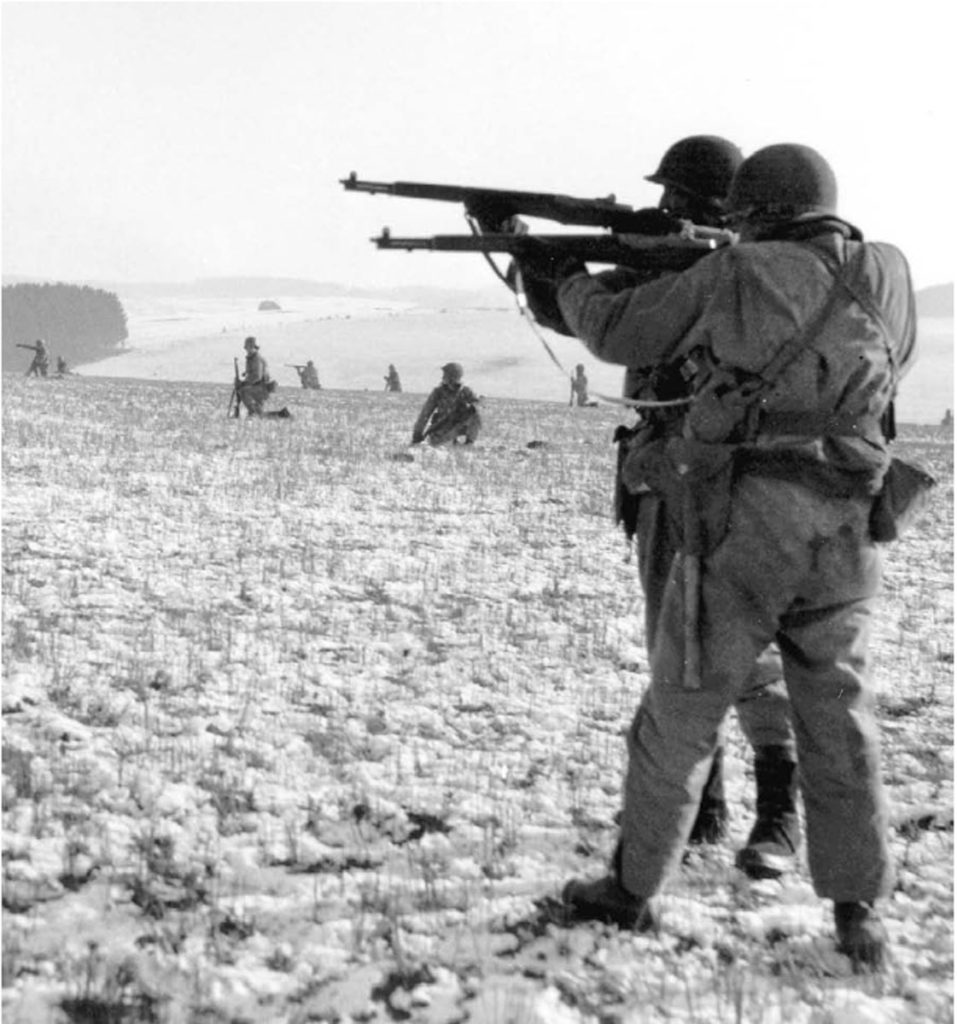 1LT Waverly Wray was born in 1919 and raised in the wooded hills around Batesville, Mississippi, perhaps a forty-five minute drive from where I sit typing these words. An expert woodsman steeped in fieldcraft from his youth, Wray was described by his commander, LTC Ben Vandervoort, thusly, “As experienced and skilled as an Infantry soldier can get and still be alive.” At 250 pounds Wray was an intimidating specimen, yet he was also a committed Christian man of character. He fastidiously eschewed profanity and sent half of his Army paycheck home each month to help build a church in his hometown.

Immediately after jumping into Normandy with the 82d Airborne, 1LT Wray set out on a one-man reconnaissance at the behest of his Battalion Commander. Wray’s mission was to assess the state of German forces planning a counterattack against the weakly held American positions outside Ste.-Mere-Eglise. Wray struck out armed with his M1 rifle, a Colt 1911A1 .45, half a dozen grenades, and a silver-plated .38 revolver tucked into his jump boot. Hearing German voices on the other side of a French hedgerow, Wray burst through the brush and shouted, “Hande Hoch!” Confronting him were eight German officers huddled around a radio.

For a pregnant moment, nobody moved. Then seven pairs of hands went up. The eighth German officer reached for his sidearm. 1LT Wray shot the man between the eyes with his M1.

A pair of German soldiers about 100 meters away opened up on Wray with MP40 submachine guns. 9mm bullets cut through his combat jacket and shot away one of his earlobes. All the while Wray methodically engaged each of the seven remaining Germans as they struggled to escape, reloading his M1 when it ran dry. Once he had killed all eight German officers he dropped into a nearby ditch, took careful aim, and killed the two distant Wehrmacht soldiers with the MP40’s.

Wray fought his way back to his company area to report what he had found, blood soaking his ventilated jump jacket. His first question was to ask where he could replenish his supply of grenades. When American forces eventually took the field where Wray had waged his one-man war against the leadership of the 1st Battalion, 158th Grenadier Regiment, they found all ten German soldiers dead with a single round each to the head. Wray had completely decapitated the enemy battalion’s leadership singlehandedly. Wray stopped what he was doing and saw to it that all ten German soldiers were properly buried. He had killed these men, and he felt a responsibility to bury them properly.

Waverly Wray survived the savage fighting in Normandy only to give his life for his country at Nijmegen, Holland, during Operation Market Garden later in the year. He has a granite marker in Shiloh Cemetery in Batesville, Mississippi, near the church he helped build. 1LT Wray was, by all accounts, an exceptionally good man who died six days before his twenty-fifth birthday. Wray died to ensure the blessings of liberty for further generations of Americans. 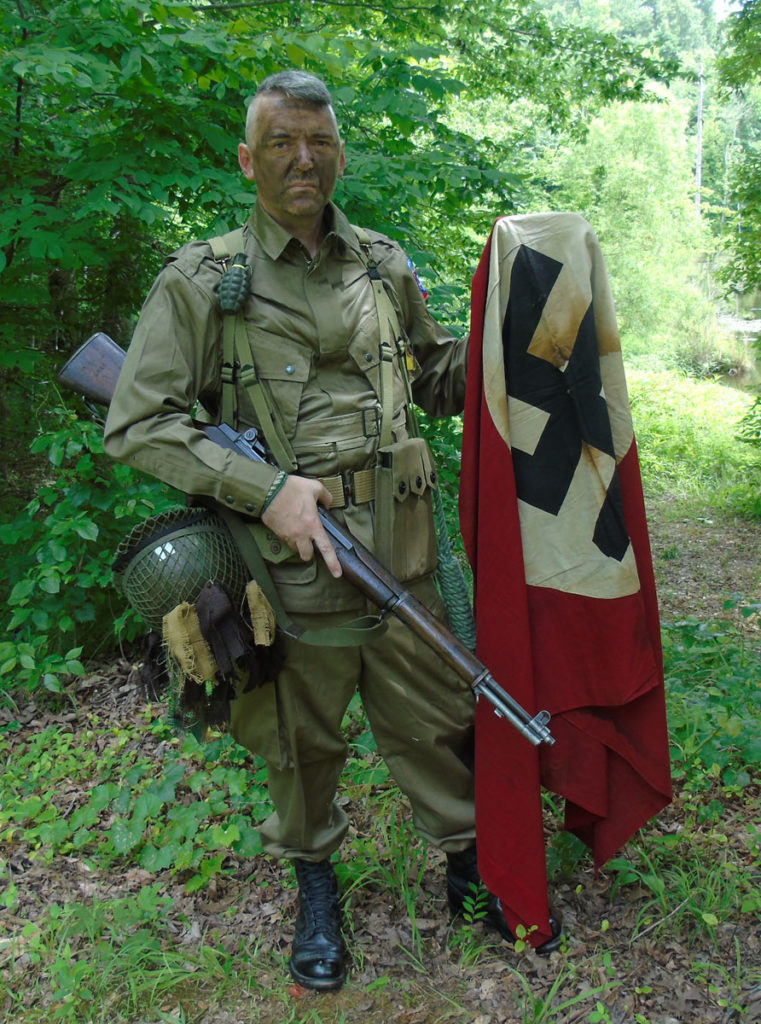 Those who lived it have told me that there was only one M1 rifle and that it wasn’t called the Garand. The .30-06 rifle we call the Garand was the M1, the M1 Carbine was the Carbine, and the M1A1 Thompson was the Thompson. There was always only one M1.

John Cantius Garand was a Canadian-born gun designer who developed the M1 rifle in the early 1930’s. Those who knew him say that old John Cantius pronounced his name differently from the way we do. In his Canadian dialect, Garand rhymed with “Errand.”

Early versions of the M1 were gas trap designs based upon the flawed presumption that ported barrels would wear appreciably faster than the non-ported sort. This same misconception is what drove the Germans to attempt the ill-fated G41 gas trap rifle before settling on the much more reliable piston-driven G43 design. In short order, the M1 was standardized with the familiar gas piston action. 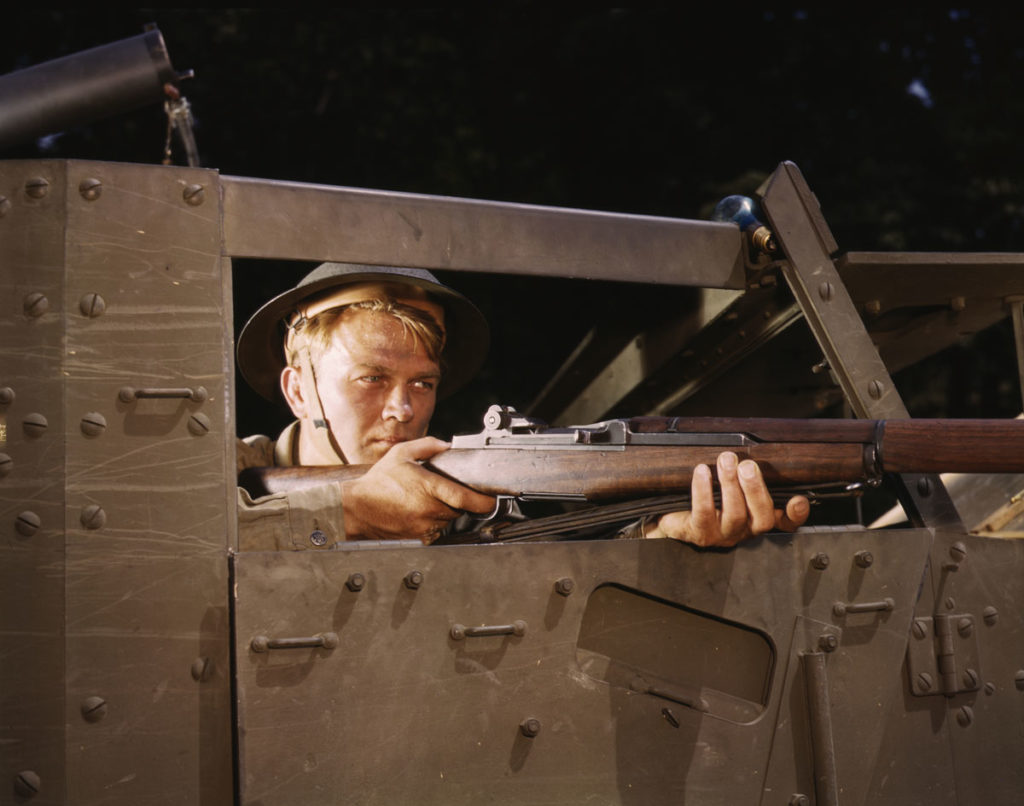 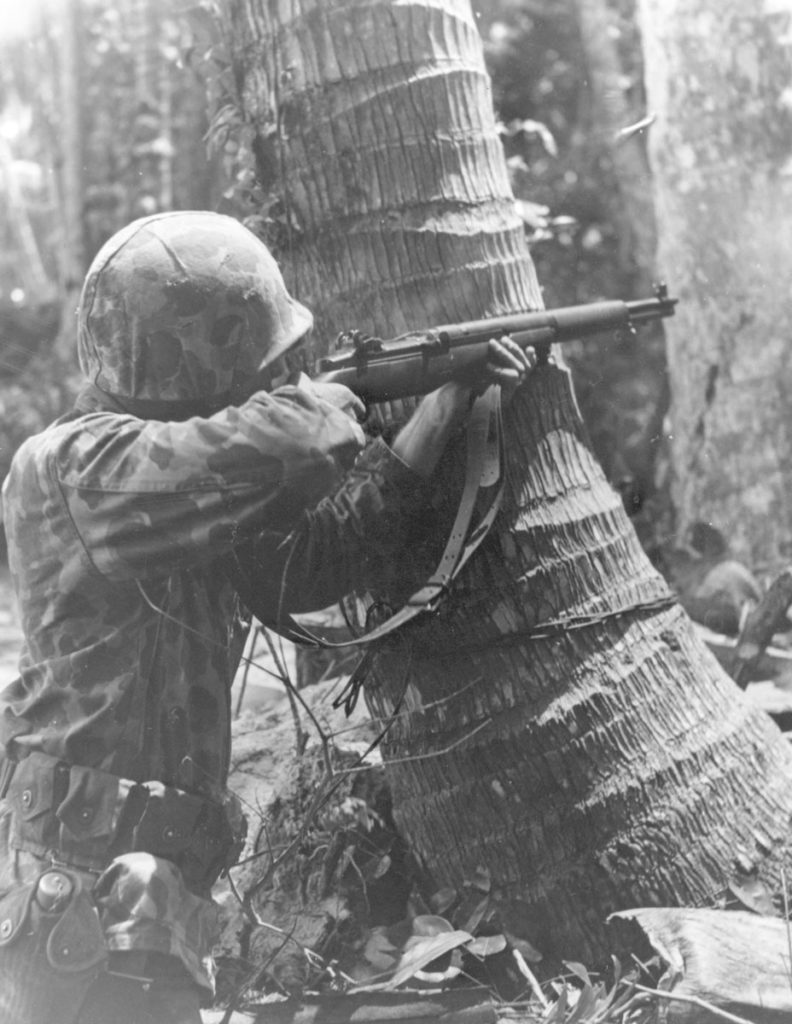 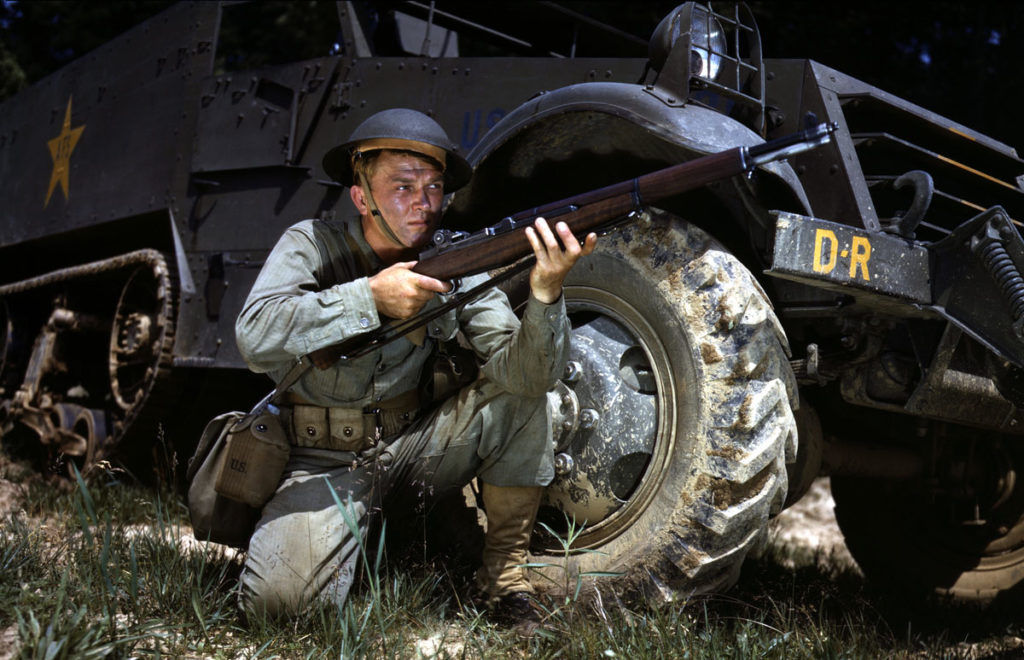 5.4 million of the rifles ultimately rolled out of four wartime factories. The M1 served with distinction in all services and in all theaters throughout World War II as well as the war in Korea. The weapon saw fairly widespread issue among ARVN forces early during the conflict in Vietnam as well. An M1 rifle cost the government about $85 during the Second World War. This equates out to around $1,200 today. 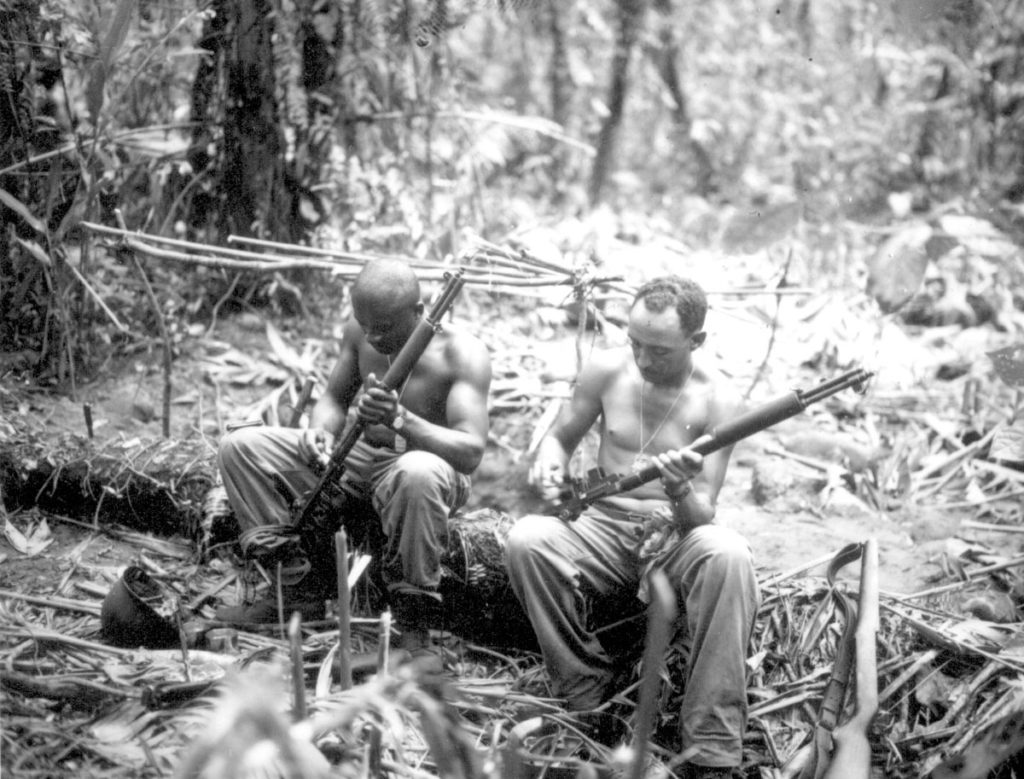 If properly maintained the M1 rifle offered a quantum advance in firepower over the bolt-action designs of the day.

For all its justifiable accolades, the M1 was a flawed design. The thing weighs about ten pounds and remains exceptionally bulky, even by the standards of the day. The eight-round en-bloc clip is extremely difficult to fill by hand, and the gun is nearly 44 inches long. Ammunition typically came issued in these disposable spring steel clips. However, early in the war troops frequently had to fill their clips manually from ammo that was packed on single stack five-round Springfield clips, something that was all but impossible to do under pressure.

Despite its few warts, the M1 represented a quantum advance in firepower when compared to the bolt-action repeaters in common service at the time. Interestingly, there are anecdotal accounts of some old school soldiers trading their M1s for bolt-action 1903 Springfields early in the war in the Philippines out of distrust of the autoloading action. However, it did not take long for troops on both sides of the line to come to respect the prodigious firepower of the M1.

The M1 rifle was a big, heavy, bulky beast, but it was also reliable, accurate, and rugged. Generations of GIs came to adore the gun.

The M1 sports a unique manual of arms. The safety is a pivoting tab in the front of the trigger guard that soldiers on in modern Springfield Armory M1A rifles today. This design is comparably accessible with either hand. The rigid charging handle reciprocates with the bolt and can be manhandled or even kicked if the action gets gummy.

To put the gun into action you retract the bolt until it locks to the rear automatically. Place a loaded 8-round clip in place in the action and press it down with the thumb until it locks. The bolt will then snap shut of its own accord. One must be fairly quick to snatch the thumb out of the way lest it gets badly pinched. Troops of the day described the resulting painful injury as “M1 Thumb.”

The M1 rifle fed from an 8-round en bloc clip. This means the clip becomes part of the action when loaded into the rifle.

The M1 will fire eight rounds as fast as the trigger can be cycled. On the last round fired the action locks open and the empty clip ejects out the top making a distinctive metallic springing sound in the process. Much hay has been made that this sound might signal to the enemy that the weapon is dry. The World War II combat veterans with whom I have visited discounted this concern. They said this sound was typically lost in the bedlam of battle. 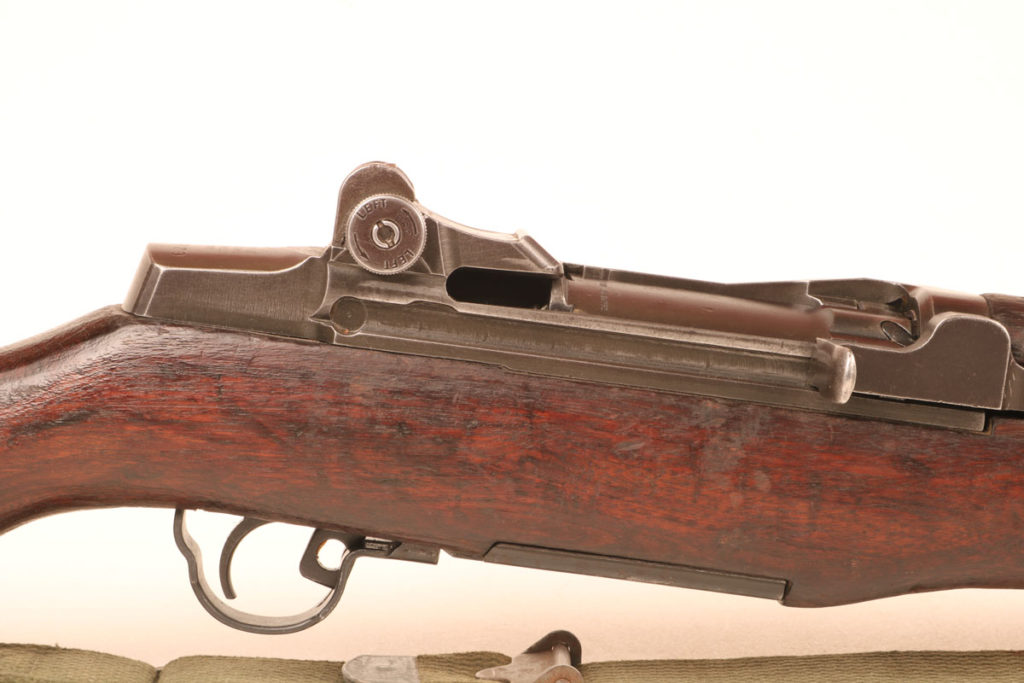 The safety on the M1 is a pivoting tab located in the front of the trigger guard. It is comparably accessible with either hand. The rigid charging handle reciprocates with the bolt. 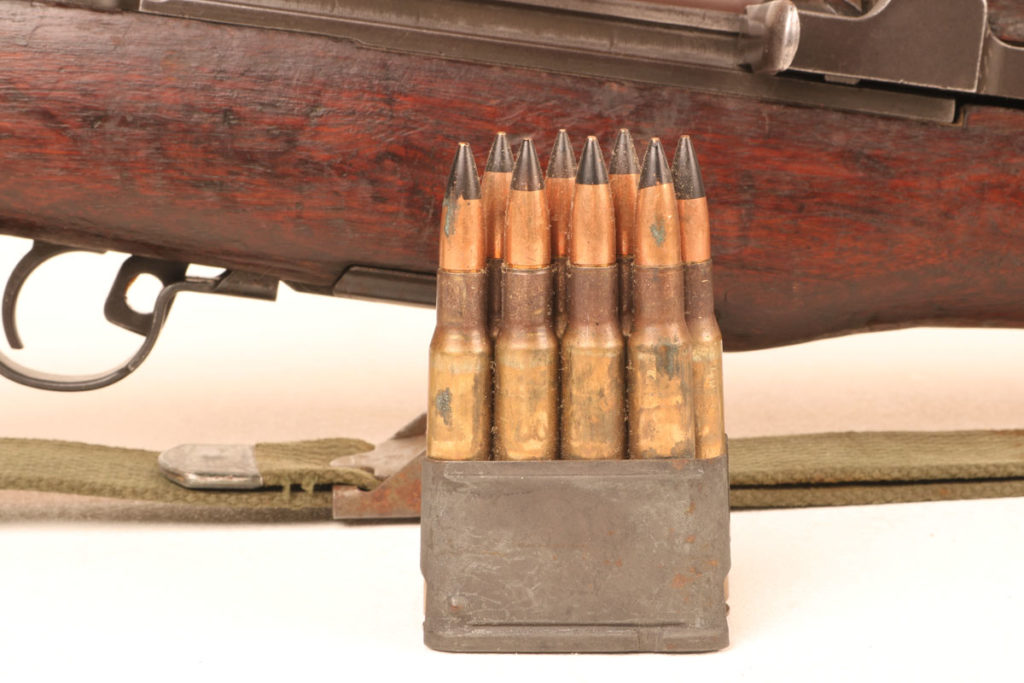 When I was a young buck you could get beautiful M1 rifles through the mail for $165 from the DCM delivered straight to your door. Alas, I didn’t have $165, and the paperwork requirements seemed unduly onerous. I did ultimately land a high-mileage DCM M1 some years later for a good bit more than that. My M1 sports a meticulously repaired crack to the upper handguard and the stigmata of hard use. I love the gun and would not trade it for a specimen that was new in the box. Like Waverly Wray and the other hard men who wielded these old guns to defeat tyranny around the globe, my M1 rifle has character.

A friend who landed on Omaha Beach on June 6, 1944, summed up an Infantryman’s relationship to his primary weapon better than I ever could. He once told me that for nearly a year some part of his anatomy was touching that rifle. Whether he was patrolling, sleeping, shaving, or crapping, he kept that M1 rifle close at hand no matter what.

The M1 is an innately accurate and imminently reliable battle arm. It is not unstoppable, nor does it shoot divinely straight. However, the design certainly earned the respect and legendary status it has gained over the decades. Big, fat, heavy, and mean, the M1 was a gun that quite literally saved the world.