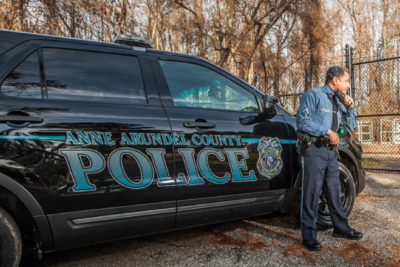 Maryland police officers shot and killed a man who they say refused to allow his guns to be confiscated. (Anne Arundel County Police Facebook)

Since Maryland’s “red flag law” went into effect in October, police have used the new statute in 114 instances to confiscate firearms from those believed to be mentally unstable.

But the most recent warrant sparked tragedy last Monday morning when police shot and killed a man whose firearms they were attempting to seize, according to CBS Baltimore.

Gary J. Willis, 61, opened the door to his home with a gun in his hand when two police officers came knocking at 5:17 a.m. on Nov. 5. Anne Arundel County police say Willis put the gun on a table next to the door, but “became irate” when the officers explained that they had come to confiscate his firearms.

Willis grabbed his gun and a struggle ensued, during which the firearm discharged. No one was injured, but the officer not engaged in the struggle shot Willis, and he died at the scene.

Under Maryland’s new Extreme Risk Protection Order law (aka, “red flag law”), family, police, and mental health professionals can seek an order from a judge to temporarily confiscate firearms from a person believed to be a danger to themselves or others. It’s almost identical to similar laws passed around the country, including Florida, in the wake of the Parkland massacre.

Some law enforcement officials claim laws like this give them a tool they’ve long needed to protect the public from mentally unstable individuals.

“Law enforcement has been running into people having some sort of mental health crisis forever, however, we never had a statutory authority to take the guns away,” Montgomery County Sheriff Darren Popkin told WSET.

The Maryland Judiciary has not released any information on why police were attempting to confiscate Willis’ firearms. Maryland’s law states that anything related to an order is confidential unless the court rules otherwise.

But the Baltimore Sun spoke with Michele Willis, Gary’s niece, who believes one of Willis’ sisters requested that police temporarily remove his guns, attributing the action to “family being family.”

Ms. Willis said her uncle “likes to speak his mind,” but she described him as harmless.

“I’m just dumbfounded right now,” she said. “My uncle wouldn’t hurt anybody. They didn’t need to do what they did.”

“If you look at this morning’s outcome, it’s tough for us to say ‘Well, what did we prevent?’ ” he said. “Because we don’t know what we prevented or could’ve prevented. What would’ve happened if we didn’t go there at 5 a.m.?”

Anne Arundel County is tied for the most “red flag” petitions filed in a Maryland county (19) during the month of October.

Next post: House Dems Will Seek to Criminalize Private Transfers in 2019