A question that I am often asked is “What is the best riflescope to buy?” This is a very hard question to answer because there are many different shooting sports—target shooting that varies from close range run-and-gun stuff to long range, slow fire courses. And don’t forget hunting, where conditions are just as dynamic. Both require a versatile riflescope that is tough as nails so it can handle whatever you throw at it. Nightforce is undoubtedly asked the same question and their answer to it is the SHV line of optics. Specifically, this is a review on the SHV 3-10X42 riflescope. 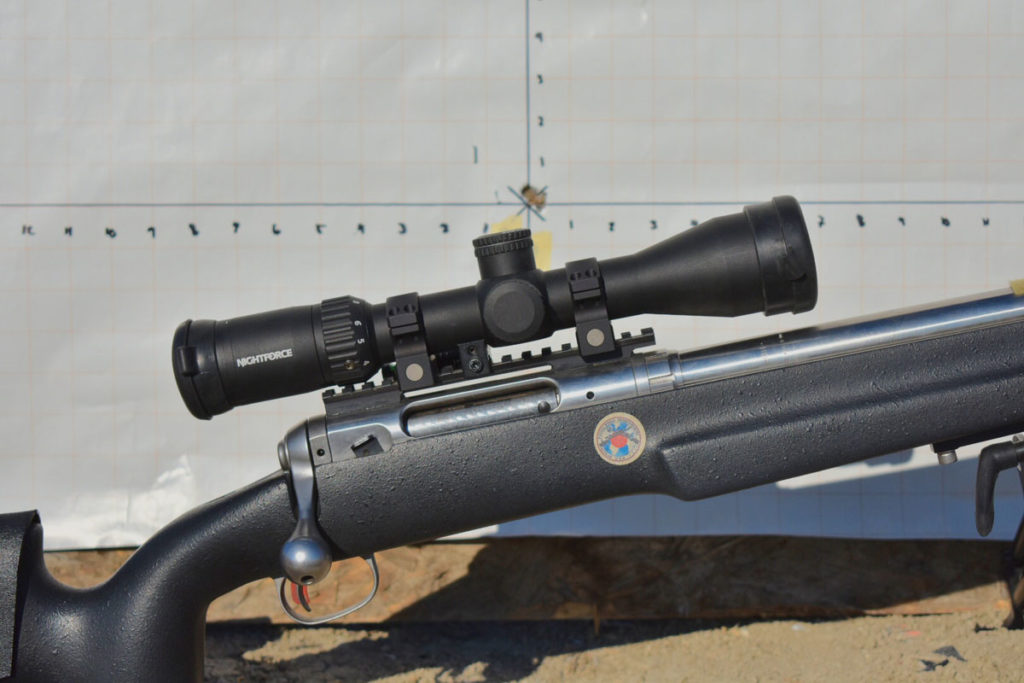 The Nightforce SHV 3-10×50 is compact, lightweight and aesthetically pleasing. It is not only gorgeous but deadly, as can be seen by the ridiculously small six shot group in the background. When pairing a quality rifle with a quality optic, results like this are typical but never cease to impress.

If you know anything about Nightforce Optics, it is probably that they are of the highest quality. I expected the SHV to be no different, but because of the price range that this particular optic fits in, I guessed it to be a more of a budget riflescope. Yes, “budget” even with a street price of about $1,000. The old saying, “You get what you pay for,” doesn’t exist without reason. However, upon examining the SHV 3-10X42, I was very impressed. The crispness and brightness of the image outclass many of my more expensive optics. Not only was the glass quality high, but it is noticeably lightweight as well! There were many other things that I noticed which were packed into this new SHV like the illuminated reticle, Nightforce’s typical (and awesome) floating crosshairs, smooth magnification manipulation and scope caps that were included with the system. Also, in all scientific measures, the scope felt bomb-proof. The clicks of the turrets were defined and stiff, just as I prefer them to be, and the set screw for the turrets are slotted so as to be removed with a coin or the base of a rifle cartridge, which I found very handy in the field. Within the first few minutes of handling the SHV 3-10×42, I was impressed and looking forward to testing the mechanics of the optic. 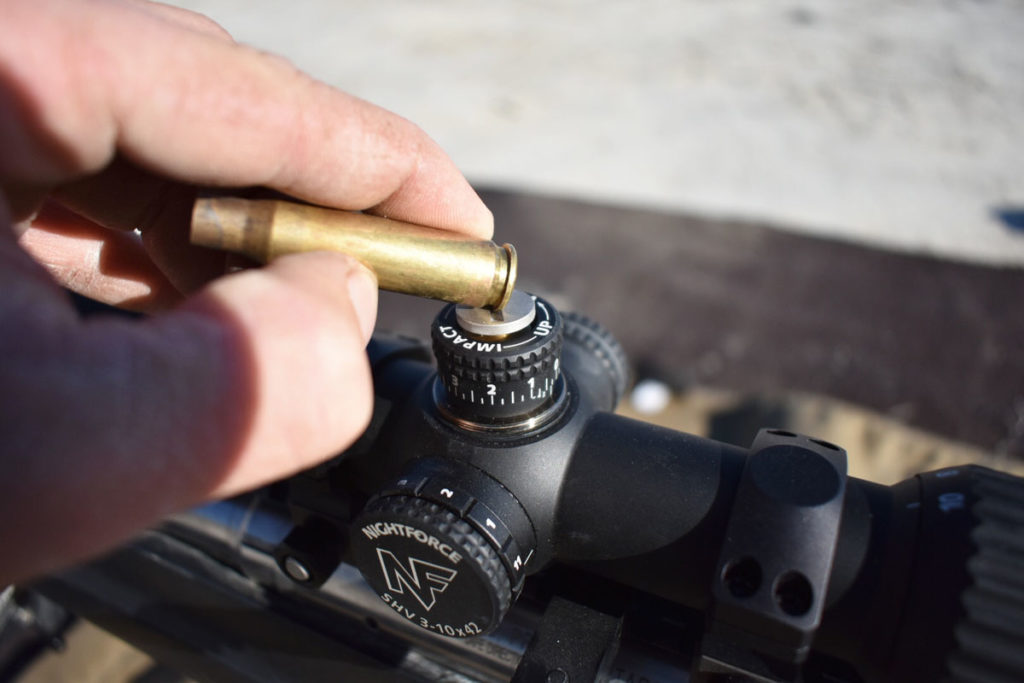 Because of the clever design of the turret set screws on the SHV 3-10×50, changes to the optic’s zero are very simple even while in the field. A coin, cartridge rim or anything of similar shape can be used to accomplish this task.

The purpose of a rifle scope is to, of course, magnify objects to aid in aiming a gun. Lately, however, the people are demanding performance from their riflescopes that have never before been seen due to the increased interest in long range shooting. If a “long range” oriented scope cannot track accurately when dialed, it is just an expensive hunk of garbage to this crowd. Naturally, I expected the Nightforce to track with leading class accuracy, but it still needed to be proven. The test consisted of what is called a “tall target test.” If you are unfamiliar with the purpose of this test, there are many YouTube videos that do a great job explaining if you are willing to look it up. For the purpose of the article, I will just briefly describe why this test is used.

Before performing the tall target test, it is paramount that the rifle scope is perfectly level. It is important that the optic is mounted correctly too with the use of bubble levels. Also, in order to keep the optic level during fire, it is handy to have a bubble level mounted to the optic or the scope rail for use on the range. Before going out in the field, I mounted the SHV 3-10×42 and took the extra care to do this by installing a bubble level on the rifle, torquing all bolts to spec using a proper torque wrench and even loctiting these bolts as an extra precaution. In science, no matter what kind, experiment setup is the most important part of a study and this is no different. 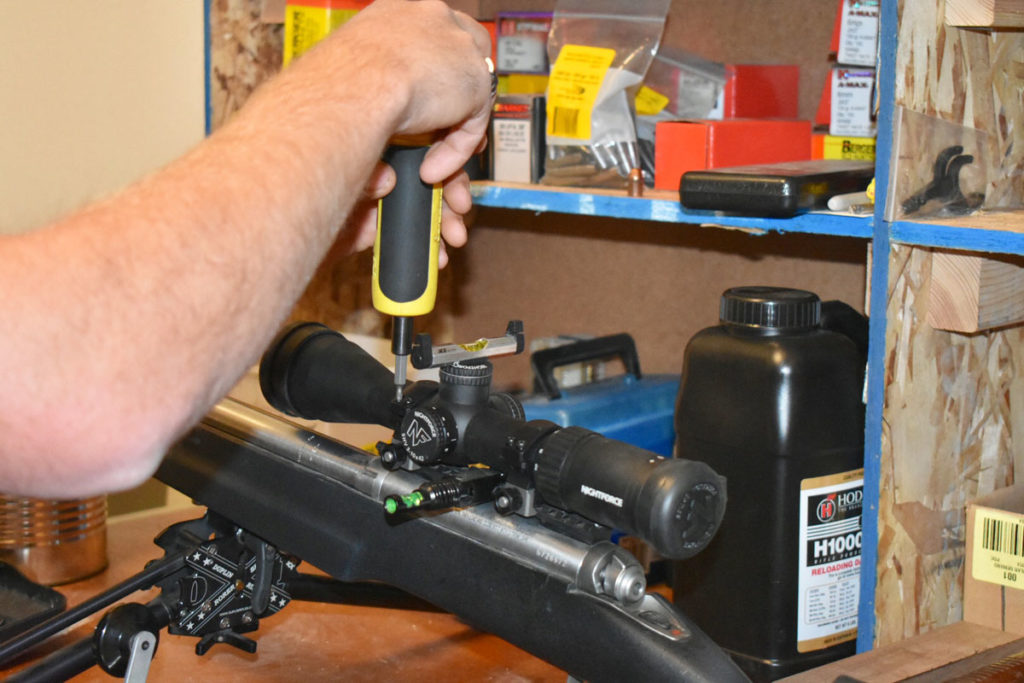 Mounting the riflescope is one of the most important tasks that is often done incorrectly. It is important to level the optic with some kind of level and torque all bolts to spec with a proper torque wrench.

The tall target test is used in order to determine how close to 1 MOA (or Mils for those of you who are wrong) your scope adjusts for every time it is dialed 1 MOA. For example, if you dial 1 MOA on your scope, but the adjustment moves your impact ¾ MOA or 1.5 MOA, this will make you miss your shots and must be known. Also, this test shows that when you make a vertical adjustment, it tracks purely on the Y-axis which is also important. 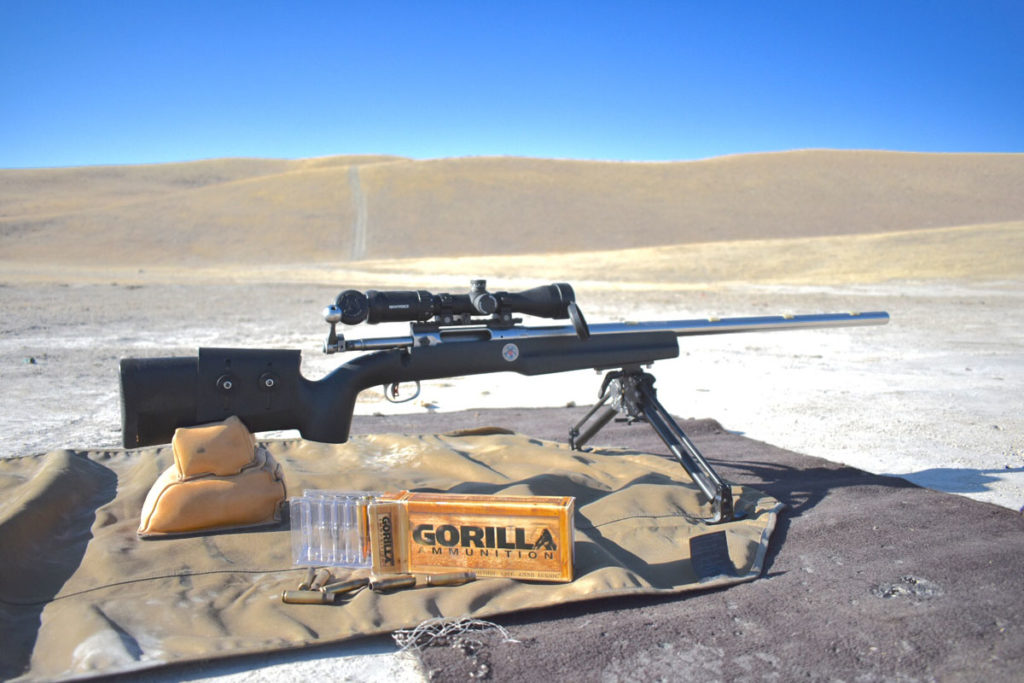 The rifle that was used in the tall target test is a built compilation of many parts but drives tacks when fed with Gorilla Ammunition 175 grain TMK 308 Winchester ammunition. The SHV made getting the copper pills into the same hole possible as well as easy to see. 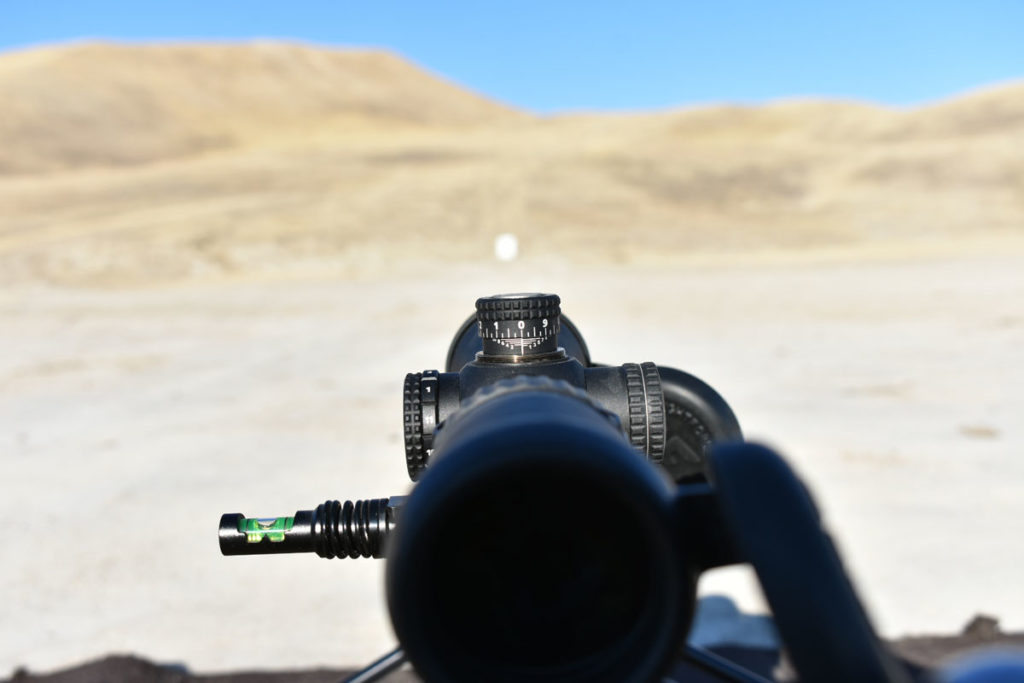 While running the tall target test, it is important to keep the gun and optic level as well as keep track of your current zero. The SHV 3-10×42 turret is easy to see and understand which made this task easier.

Finally, I measured the distances between the point of aim group and the groups on the X and Y-axis and ran some calculations to find how well the SHV 3-10X42 tracked. Here is my equation: 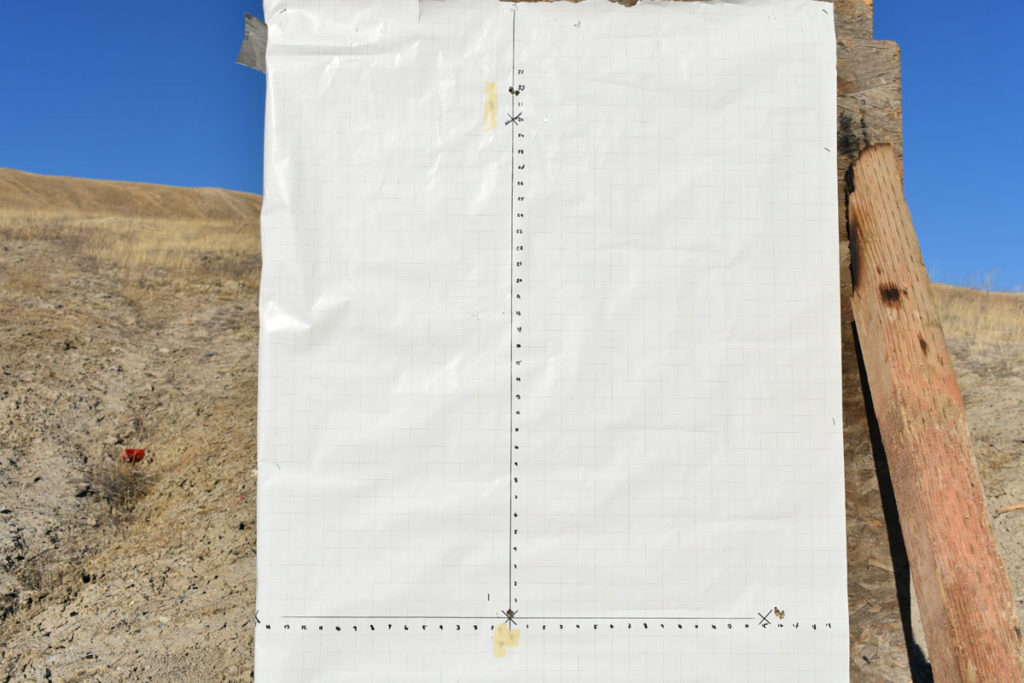 The near perfect results of the tall target test. The target is the backside of gift wrapping paper, which has a 1” grid in order to aid in cutting; or in this case, measuring group distances.

The vertical group landed 31.5 inches above my original point of impact. I put this information into the above equation and calculated that the expected point of impact is 31.41 inches high. If you divide the tested value by the expected, it shows 99.7% accuracy or an error of 0.3%. This means that every 100 MOA you dial upward, you will be 0.3 MOA higher, or in other words, this scope tracks extremely accurately. But like many mechanical tools, there is a margin of error. Side note: For those of you like myself that understand scientific figures, please ignore my willing misuse of them. I did not round because there are other errors at play such as my shooting skill and precision limitations of a tape measure.

Next, to calculate the horizontal error, I used the same method. I measured the distance between the point of impact and the group on the X-axis, which came to be 15.75 inches. Then, using my formula a second time, I found that the expected distance of travel is 15.705 inches. Again, using the same method, I found the scope to track 99.7% accurately in the X-axis. This means it has an error of 0.3% which is exactly the same as the vertical!

Even though the Nightforce SHV 3-10X42 is compact, lightweight and relatively streamlined as far as features go, it still has more features than most other companies’ budget scopes. It comes with an eleven setting illuminated reticle, target style turrets that are capped and a fixed parallax plus a fast focus eyepiece. The amount of vertical adjustment needs to be recognized too; a whopping 90 MOA! That’s about enough for any shooting, hunting, or varminting, I might say.  The specs can be found here. Or for your convenience, they can be found in the table below. 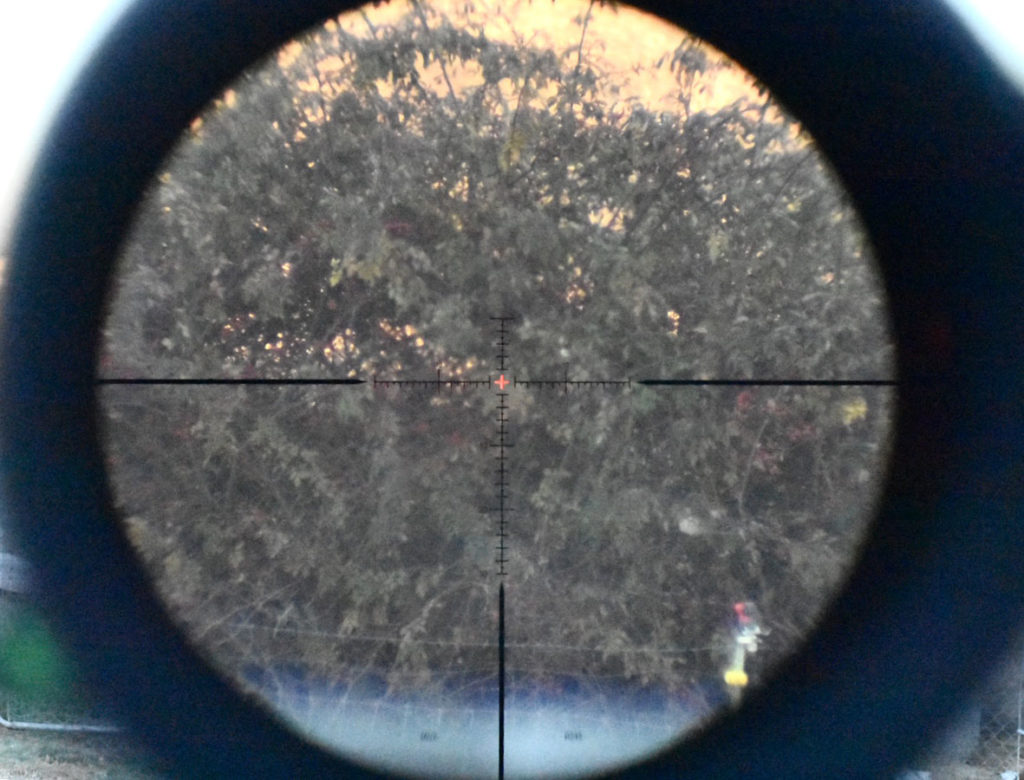 The illuminated center of the reticle is clearly visible in low light which can be handy for late range day sessions or hunting in low light conditions.

I am very impressed with Nightforce’s SHV 3-10×42, as can be expected of any of their optics. The scope tracked perfectly which is the most important aspect of a long range optic. It is overbuilt and tough as a consequence.  The MOAR™ reticle that my optic came with is very clean and clutter free which allows for quickly deciphering when calling for corrections. The reticle is also the perfect balance of visible and small in this second focal package, the illuminated reticle is bright and offers many different levels to choose from and the glass on this scope is impressive, to say the least.  That said, if you are looking for an optic similar to this, I would recommend it. I am a big fan of the decision by Nightforce to design it with capped turrets because this optic is built with versatility in mind. If you are beating the gun around that you mount this scope to, it would be bad to have the turrets rotate because they do not have a return to zero mechanism that you can confirm zero with. In the end, the SHV 3-10×42 is a quality optic that I would trust on my own rifle.

Visit Nightforce to learn more about their optics by clicking HERE.