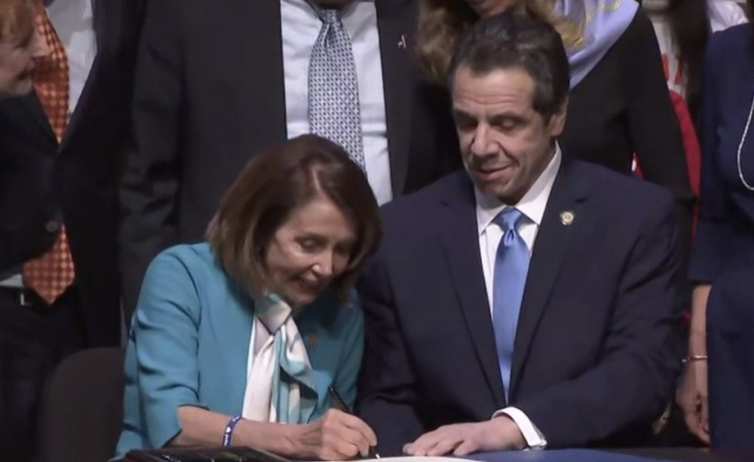 New York became the first state to give teachers confiscation power thanks to a new Red Flag bill signed into law Monday by Gov. Andrew Cuomo.

“Today New York is proud to pass the first-in-the-nation Red Flag Bill that empowers school teachers to do something when they believe something bad is going to happen,” said Cuomo at the signing ceremony where he was joined by House Speaker Nancy Pelosi (D-CA).

“We are empowering teachers not by giving them guns like the President wants – but by arming and empowering them with the law, so when a teacher or family member sees there is a problem, they can go to a judge and get a court-ordered evaluation,” he continued. “The Red Flag Bill will save lives and doesn’t infringe on anybody’s rights and it is common sense.”

Under the law, a police officer, family member or teacher can petition a judge for an “extreme risk protection order” against an individual. If the judge grants the order the individual is then prohibited from purchasing and/or possessing firearms. Law enforcement is also sent to the individual’s home to confiscate his firearms.

The ERPO stays in effect for a period of six days during which a hearing is held where the individual can present his case. If the individual fails to convince the judge that he is not a danger to himself and others, the judge may extend the ERPO for up to a year.

SEE ALSO: The Universal Phobia: Being Afraid To Kill Despite Training, Bearing Arms

“These bills are bold and far-reaching, containing strong, comprehensive solutions to save lives and end the crisis of senseless gun violence in America. Leaders in the State House and in the U.S. House must continue to work together to ensure that no other family is forced to endure the tragedy and heartbreak of gun violence, whether in our schools, in our places of worship, on our streets or in any place,” she added.

“The red flag legislation while sounding good to the anti-gunners and non-gun owners will do absolutely nothing to make the people of NY safer. It will only make it easier for the State to take guns away from lawful citizens without any due process and violating their civil rights,” King told GunsAmeria in an email.

Red flag laws are being pushed by gun control groups across the United States. The first red flag law was passed in Connecticut in 1999. By 2017, five states had the law on the books. Then, with the advent of the school shooting in Parkland, Florida in 2018, the number more than doubled, as GunsAmerica recently reported.

Next post: A Current Twist on a Timeless Message from Charlton Heston