Vermont Police: ‘Turn In Your Bump Stocks… Or Else’ 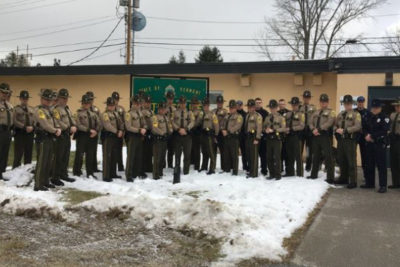 The Vermont State Police announced Monday that they would begin anonymous collection of bump stocks, which have been banned in the state following passage of a gun control bill by the state legislature.

“In compliance with that law, the Vermont State Police will allow members of the public to voluntarily surrender their bump-fire stocks anonymously at any of the 10 VSP barracks in the state,” Capt. Timothy Clouatre said in a release. “People may turn in the devices during regular business hours of 8 a.m. to 4 p.m. Monday through Friday.”

The legislature has provided no path to legal ownership, and those who surrender their devices will not be reimbursed. Possession of a bump stock is punishable by up to one year in prison and a $1000 fine.

The bump stock ban is only a small part of S.55, which also raised the legal age to purchase a firearm to 21, limited legal magazine capacity, and required background checks for firearm sales to non-immediate family members.

The Democrat-controlled Vermont General Assembly passed the bill earlier this year in the wake of the Parkland massacre, but gun rights advocates were hopeful Republican Gov. Phil Scott would block at least parts of the anti-gun legislation.

That didn’t happen, and the supposedly pro-gun governor enthusiastically signed the bill.

“As Governor, I have a moral and legal obligation and responsibility to provide for the safety of our citizens,” he said in a statement earlier this year. “If we are at a point when our kids are afraid to go to school and parents are afraid to put their kids on a bus, who are we?”

There are an estimated 520,000 bump stocks in the United States, according to the ATF, and at least eight states have banned the device since the Las Vegas massacre last year, including Maryland, Connecticut, Washington, Florida, and New Jersey.

Compliance has remained almost nonexistent. Only three stocks had been surrendered by the February deadline in Massachusetts, and as of earlier this year, none (0) have been turned in since Denver and New Jersey banned the devices.

Only Washington has instituted any kind of buyback program, and the state plans to offer $150 per surrendered device. The lack of compensation in other states is one of the causes of low compliance, according to Mark Pennak, the president of Maryland Shall Issue.

“You’re basically telling people to destroy their property,” Pennak told PEW. “If you take someone’s private property, you have to pay for it. They bought them just because they’re fun to use, and that’s it. You’re criminalizing a plastic item, and sending people to prison for three years for it.”

Vermont residents must detach the bump stocks from their rifles before surrendering them, and police plan to store them at whichever of the 10 State Police barracks the owners surrendered them to. Police say they will not record any information about those who surrender the devices.

Next post: Tom Selleck Quietly Resigns from NRA Board of Directors