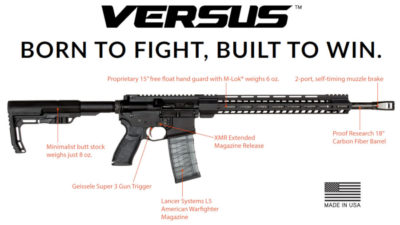 Two-gun, three-gun…for practical shooting the Versus is ready. (Photo: Caracal)

Working out of Boise, Idaho, Caracal USA is now shipping their competition-ready Versus AR-15-pattern rifle. This gun stands out by packing a ton of premium features into a surprisingly affordable package.

The Versus rifle was developed for practical shooting matches. Its features were requested by pro shooter Travis Gibson and other Team Caracal members. 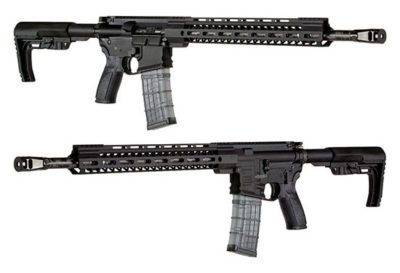 It would be nearly impossible to build a rifle with these features for less. (Photo: Caracal)

Team Caracal is already taking trophies with it. “We’re very proud to congratulate Travis Gibson and Team Caracal USA on a 2nd Place finish at the 2018 Safariland Expedition,” said Caracal director Brian Leslie. “The Versus rifle is born to fight and built to win. We wanted to make a rifle that shooters could take out of the box and straight to the podium. And, that’s exactly what Travis did.”

“The goal for this match was to shoot the limited division match with an out of the box Caracal USA Versus rifle, Gibson said. “This rifle is awesome. I mounted up and zeroed a Vortex Optics Spitfire the morning I started shooting, and it was spot on all weekend.”

The Versus rifle is available directly from Caracal USA. It has a suggested price of $1,799. A Proof Research barrel by itself costs almost $1,000 and the Geissele S3G adds a couple hundred more – this rifle is surprisingly low-priced.

Of course that doesn’t include an optic or iron sights but those accessories are pretty personal and just about every Versus shooter will want something different. It does include four Lancer smoke magazines, available in standard and 10-round capacities. The rifles are made in the U.S. and have lifetime warranties.