In our last episodes we covered the fun part: guns and how much ammo to feed ’em. I’m as guilty as anyone when it comes to chewing the fat on this topic; I’ve spent hours in the forums talking about caliber preference, weight vs. power, and all the like. But now we have to get into the not so fun part, the part that resembles work. If guns are the equivalent of showing off your abs, the hardening the home part of this series is how you got those abs. It isn’t sexy, but it is important. 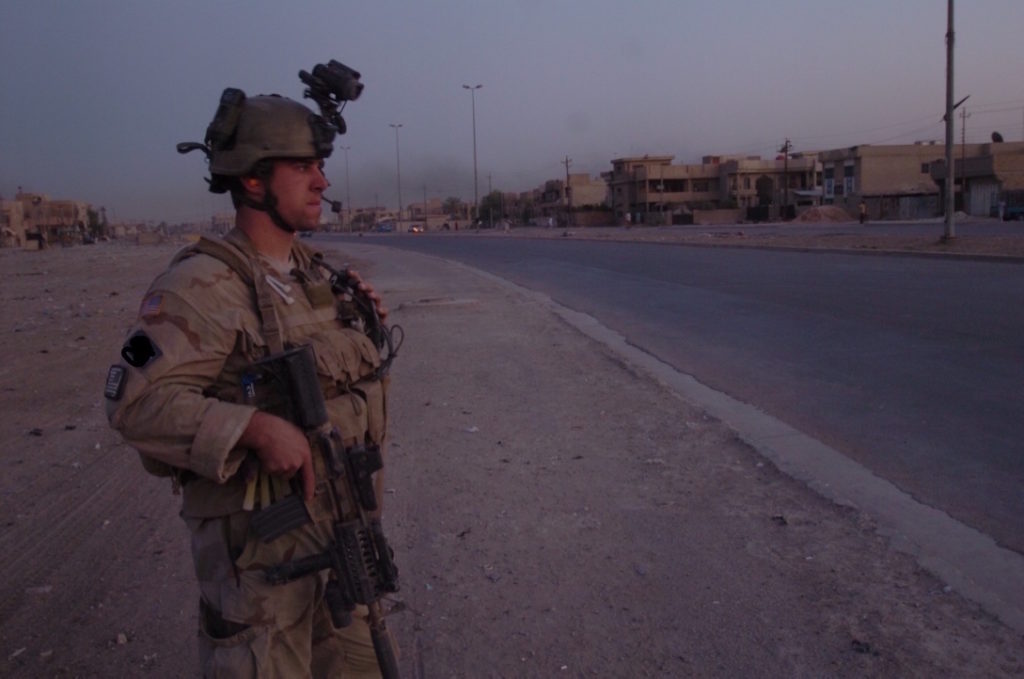 I’m going to start here with some general experience, and why I’m qualified to speak on the matter of defending an urban location. First and foremost, I did some tours in Iraq, which offers some unique insights. Despite what the public generally thinks about U.S. Military bases and the lines of trailers many troops used, it wasn’t always like that.  Especially in the early days, we took over former regime buildings and lived and worked in them. It is pretty funny to see a bunch of grunts living in a palace with gold toilets, but it’s how it went. The bad guys weren’t shy about still trying to kill us in those structures, so we learned a lot about hardening them from both rifle fire and mortar attacks. With the caveat that we usually had Uncle Sugar’s logistics train to help us, which provided very expensive and unwieldy things. Like Kevlar blast blankets and Hesco bastions as time went on. Blast blankets start at about $1,500 apiece, so I think we can leave those off the shopping list.

Second, Iraq had a very weird infrastructure. In certain spots at least, I remember being amazed by how similar it was to a U.S. city. Like the interstate highway system around Baghdad had green and white signs exactly like ours (only they were in English and Arabic), letting you know what exit was coming up. This applied somewhat to buildings as well. In the cities, most structures were concrete and bore at least a passing resemblance to ours. Minus all the OSHA standards and safety features.

Third, not only did we harden buildings, so did the bad guys. It was not uncommon at all to have to fight through barricades and the like, especially if a certain neighborhood was in open revolt at the time. That, combined with some very odd design choices, gives a man insight into how to set up a defense.

And fourth, my last job helps a lot as well. As a CQB instructor, part of the task was teaching new guys how to deal with obstacles similar to what they were likely to encounter. But being on a timeline and a budget, the idea was to build those obstacles cheap and easy. But also in a manner that would require a lot of effort from the student to overcome or work around or breakthrough.

Much like the first article on rifles, where we divided the world into free and non-free cities, we need to divide again. The first part of this will focus on the suburbs, for a normal American house built of 2x4s and drywall. The second will focus on the concrete and stone structures we introduced in episode one. There is obviously some overlap of what can be done, and those things I will put in the second part.

Having traveled the world, I can generally break all construction into two categories. American, and everyone else. For cities this is definitely true, Prague looks like Okinawa, looks like Cairo, in terms of things built in the last 50 years. Maybe I lack the artist’s eye, but it’s how I see it. No one on earth has American-like home ownership, owed at least partially to our ability to build them relatively cheap but also structurally sound. And while American homes have proven capable of lasting against the elements for 100 plus years, they do have a weakness. They don’t stop bullets worth a damn! Maybe that is also because we always play away games.

Unless you have something a little different, like a log cabin with foot-thick walls, your house is largely indefensible against rifles. It is even worse against fire, which is a concern I often see ignored in prepper circles. Your back fence will burn, your shingles will burn, and the outside of your house will burn with very little effort. We have largely mitigated this problem in civilized society by having good fire departments and enforcing suburban burn bans, but it is a different animal when Mad Max rules are in play. In short, I would not want to ever try and defend my house from teeming hordes equipped with Molotov cocktails and long guns.

But you might not have a choice. So you can still do some things to tilt the odds in your favor. A lot of this is construction specific, which also varies from region to region. One thing that has been brought up in the comments section is sandbags. Plausible option and it would help stop bullets at least. The downside here is the number of sandbags you would need to secure a perimeter around your home, and the labor required to fill them. Having done some sandbag filling, it is not a fun chore.

Some suggested sandbags in the context of hardening only one room, but that has downsides too. Even to protect an interior room is going to require a lot. And if you can only defend that room, you are ceding enough ground to attacking forces to get within 4 feet of you before you have a clear shot.

If you are built on a concrete foundation, you can actually take a shortcut. It’s extreme, but we are talking about extreme circumstances. If you cut holes in your floor for fighting positions, you would lower your needed sandbag count by a lot.

Because you have walls to hold the dirt up, you could actually get by without any sandbags at all. You will still want a wheelbarrow, but you could actually build “range berms” three feet high the entire way around your house. Inside or outside, depending on the direness of the situation.

I have a full basement, so my options are more complex. The smartest thing I could do is build parapets to my needed perimeter positions, and then cut firing ports in the walls to the outside. That cedes my entire first floor, but the surprise would be nasty. Imagine running up the driveway for an easy score, then taking rifle fire at knee height. Ouch!

While we are talking about the typical neighborhood set up, the direness of the situation directly influences the level of heavy-handed response from you. For instance, have you thought about fields of fire? Most of the places I have lived, my best course of action would be extreme. I would have to huddle the neighbors in my own home, while I burned theirs to the ground. Otherwise, the avenues of approach would be many. You can stop saboteurs at 50 meters. At five meters, they are likely to win or at least complete their task.

What else is a high priority? The next step we can take directly from our friends in hurricane country. While plywood window coverings won’t stop bullets, they do stop bricks and Antifa goblins (FYI: half-inch plywood won’t even stop handgun rounds, much less rifle fire). I suggest a slight variation from the full coverage of windows, leaving an 8-inch gap at the bottom. This prevents your house from being totally dark while also creating airflow. Since you bought a pile of guns from episode 1, it also gives you space to see and shoot back.

Won’t the gap make the window coverings easier to rip off? That is a valid criticism, and yes, a little. But two things. One, as they said in Rhodesia, “An obstacle is only an obstacle if it’s covered by fire.” If someone is sticking a crowbar in your barricades, you should be sticking bullets in them. And two, trying to remove a sheet of plywood held in by a dozen three-inch deck screws is no easy feat. With your F-250 maybe but not with just your hands or hand tools.

Won’t the gap allow snipers to shoot into your house? Possibly. Walking in front of a lit window does create a signature that could get you shot. But it is also kind of the point of the gap. That ribbon of light should serve as a reminder not to walk in front of it. Because in terms of rifle fire, your house might as well be made of paper mache.

Doesn’t the plywood create a fire risk all its own? Yes, it will burn, no question. But if it keeps a Molotov from landing in your living room/inside perimeter, it has still done its job. Which brings up the next subject.

Aside from all the standard prepper food and water, you are going to need some other things for home defense. Right up there with bullets should be fire extinguishers. A million dollars in guns and ammo is worthless to you if it burns up. When you calculate the spots in your home that need to be covered by a sentry, calculate 2x fire extinguishers for each as well.

Next, you need at minimum a full contractor box of either nails or deck screws. I prefer deck screws, but only if I have a cordless drill. Nails are easier to install with manual labor but are also easier to pull out. You can make some creative barricades with just that and materials laying around your garage or basement. In the absence of plywood, I could barricade all my windows with fence planks.

For our suburban neighborhood defense, I will close with this. You are going to have to think outside the box. One of the other specific suggestions I have is to plant a large bush or bamboo in a spot you have no windows, 3-4 feet off the wall. The thicker the better. If I was planning to siege a suburban house, and I had numbers on my side, what would my plan be? The same as any Old West movie. Cover the doors and windows with guns, and set it on fire. Shoot anyone that comes out. It is a mistake to assume goblins have never watched an old Western or can’t fathom that simplistic line of reasoning. If you find yourself in that spot, the weakness of sheetrock walls can work to your advantage for once. The bushes are to cover your emergency escape hatch, that you are cutting on the inside from day one of the crisis. If you ever need it, cut the last bit of exterior wall you have left in place, and the ground cover buys you precious seconds of surprise. It’s little things that often give you a tactical advantage, and you have to shift your thinking.

Tune in next week, when we cover the specific defense of concrete buildings for our brethren stuck at the city center.

Previous post: Obama-Era Study Refuted, US Accounts for Less than 3% of ‘Mass Shootings’