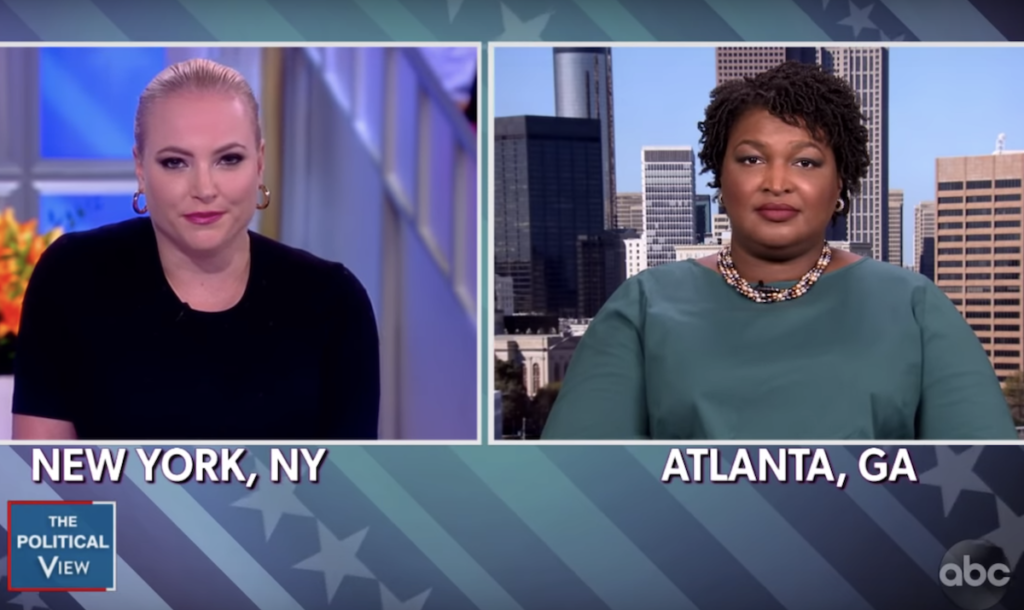 The View’s Meghan McCain called Georgia gubernatorial candidate Stacey Abrams on the carpet Tuesday regarding her position on guns.

Abrams claims not to be anti-gun, yet when it comes to banning and even confiscating AR-15s the Democrat believes there has to be a national “conversation on how it’s accomplished.”

“You have been endorsed by Everytown [for Gun Safety], which is an anti-gun organization, Michael Bloomberg‘s anti-gun group as well,” McCain said. “You say you’re proud to have an ‘F’ rating from the NRA. Michael Bloomberg and others like him, in the wake of what happened at Pittsburgh, support taking away the AR-15, which is the most popular rifle in America, from people.”

“Do you, like Everytown, support banning the AR-15?” McCain asked.

“Let’s be clear, I’m not anti-gun. My great-grandmother taught me how to shoot when I was growing up in Mississippi. I like trap shooting, I like target shooting. I don’t hunt because I mostly eat chicken and that just seems mean,” Abrams said. “However, I know that the most responsible gun owners understand that they have the responsibility for the firearms, and making sure that only responsible people have those firearms.”

“I do not believe that weapons of mass destruction like the AR-15 belong in civilian hands. I think it’s for government use. I have shot an AR-15, and I think you probably have too, and while it’s an amazing amount of power, it also is an amazing amount of destruction, and there is very little that can be done to protect vulnerable communities when the AR-15 is present,” she said.

“It is possible to believe in responsible gun ownership and to believe that there should be regulations on that,” Abrams said. “Antonin Scalia said that, and we have to believe as a nation, that when our communities are vulnerable, when you can’t go into a synagogue or a church or a school without fear for your life, there is something wrong with our system of gun ownership.”

SEE ALSO: Piers Morgan to Trump on ARs: ‘Grow a pair, and ban them’

While Scalia did say that there were some historical prohibitions and longstanding regulations with respect to guns, for example, felons and the mentally ill cannot possess firearms under federal law, on the AR question, the late justice wrote in the landmark 2008 Heller decision that the 2A protects firearms that are “in common use” for “lawful purposes like self-defense.” With millions of ARs in circulation — as McCain noted in the interview, 61 percent of rifle sales in America are ARs — there’s no doubt that the “in common use” standard is satisfied.

Still, Abrams mistakenly believes the government should go ahead and round ‘em up to protect vulnerable communities.  Right, because disarming the disenfranchised is the best way to make them safer, especially when they live in high-crime areas.  SMH.

According to the most recent polling, Abrams is running neck and neck with Republican candidate Brian Kemp.  It appears this governor’s seat is completely up for grabs.  Georgia gun owners better show up on Tuesday.