If passed this November, I-1639 would ban the sale of semiautomatic rifles to adults under the age of 21, create a registry of gun owners, establish a 10-day waiting period for certain purchases, hold gun owners liable for failing to secure firearms, and allow the state to charge a $25 fee on the sale of “assault rifles.”

I-1639 defines “assault rifle” as “Any rifle which utilizes a portion of the energy of a firing cartridge to extract the fired cartridge case and chamber the next round, and which requires a separate pull of the trigger to fire each cartridge.”  Included in this category is any semiautomatic long gun chambered in .22LR.

“We all recognize that I-1639 is a hodgepodge of gun control schemes, and we’re united in the effort to prevent it from passing and turning law-abiding citizens into criminals,” said CCRKBA Chairman Alan Gottlieb.

“Gun prohibition lobbying groups based in New York and Seattle are using Washington State as a test tube for their insidious gun control crusade,” Gottlieb continued. “We’re going to stop this nonsense before it spreads like a cancer to other states.”

Billionaires are backing I-1639 in a big way. The Seattle Times reported that of the $4.5 million that’s been raised in support of the initiative thus far, Microsoft co-founder Paul Allen, former Microsoft CEO Steve Ballmer, venture capitalist Nick Hanauer, and their family members account for approximately $3.6 million. An additional $250,000 was donated by former New York City mayor Michael Bloomberg via his gun-control outfit Everytown for Gun Safety. 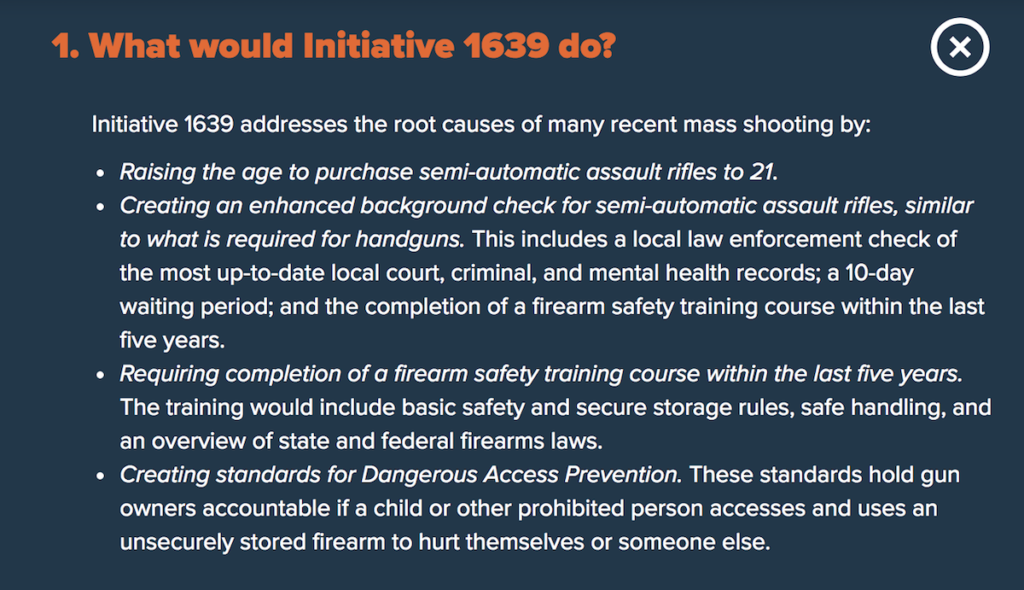 Meanwhile, the NRA has $173,000 in opposition funding, with an additional $24,300 coming in from a group called Save Our Security.  Quick arithmetic indicates that pro-gunners are being outspent by their adversaries about 23 to 1.

Yet, the good news is that dollars don’t vote.  People do.  If the NRA, CCRKBA and the other pro-2A groups in Washington can really mobilize voters come November, the amount of dinero dropped on I-1639 won’t matter much.  Because common sense and the Constitution will prevail and it’ll get voted down.

“The six million members of the NRA enthusiastically welcome the Citizens Committee For The Right To Keep And Bear Arms and the Washington Arms Collectors to this fight,” said Chris W. Cox, executive director of NRA’s Institute for Legislative Action. “Washington gun owners deserve a coalition dedicated to defending their freedoms and the NRA is ready to lead the charge.”

Next post: BREAKING: Cody Wilson Steps Down as Head of Defense Distributed Amid Sexual Assault Allegations

Previous post: What I Love & Hate About the SIG Sauer P239