“The reports of my death are greatly exaggerated.”  Mr. .40 Smith & Wesson

Okay, so the quote is actually (and incorrectly) attributed to Mark Twain, author of Huck Finn and many other novels. But it could as easily apply to the .40 Smith and Wesson as a self-defense caliber since reports of the caliber’s death were breathlessly hyped a couple years ago when the Federal Bureau of Investigation (FBI) announced it was switching its duty sidearms from the .40 S&W to 9mm.

However, thousands of people still own and appreciate their .40 S&W pistols; hundreds of police departments still have .40’s as their duty sidearms and/or approve them for undercover use. Death notices aside, the .40 S&W isn’t going away anytime soon. 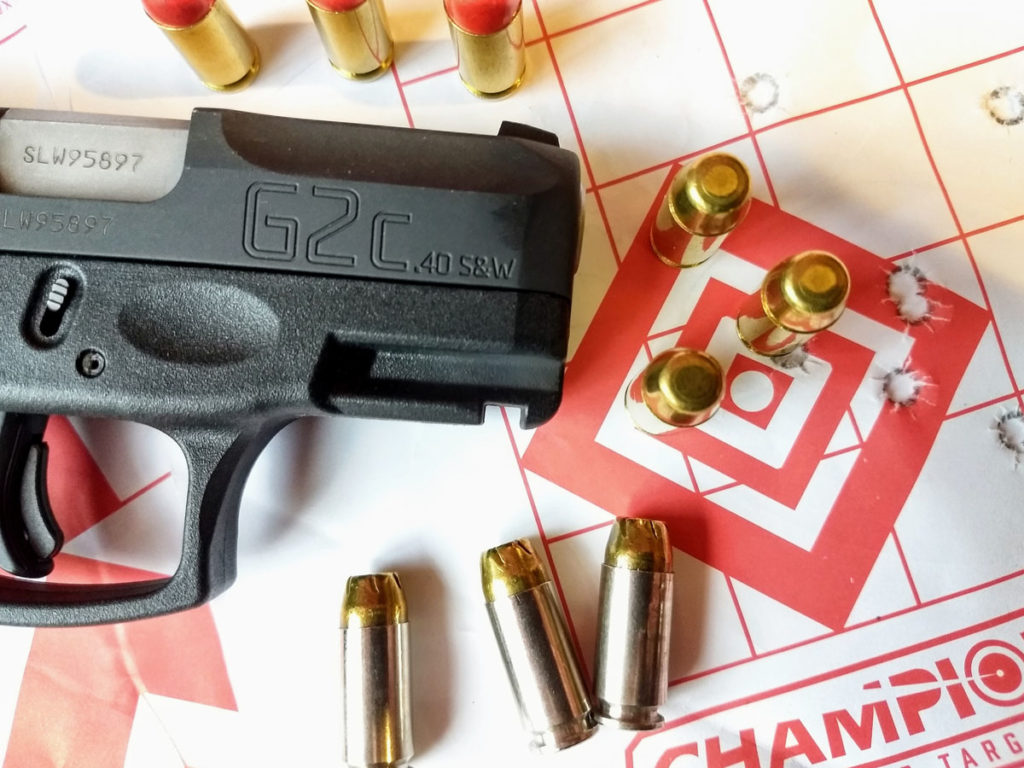 Sorry, 9MM fanatics–the .40 S&W cartridge and pistols are both here to stay.

And contrary to the FBI change-over and associated 9MM rah-rah, the .40 S&W is at least the equal of the 9MM as a self-defense round. Simply scan various ballistic charts and it’s clear that .40 S&W self-defense rounds usually offer slightly better velocities and significantly more energy versus 9MM loads.

Not all manufacturers have bought into the reports of the .40 S&W’s demise, either, including Taurus. Near the end of 2018, Taurus introduced the G2c semi-automatic pistol in both 9MM and .40 S&W and spent some extra marketing time informing the shooting world about their .40 S&W model as a good choice for concealed carry. 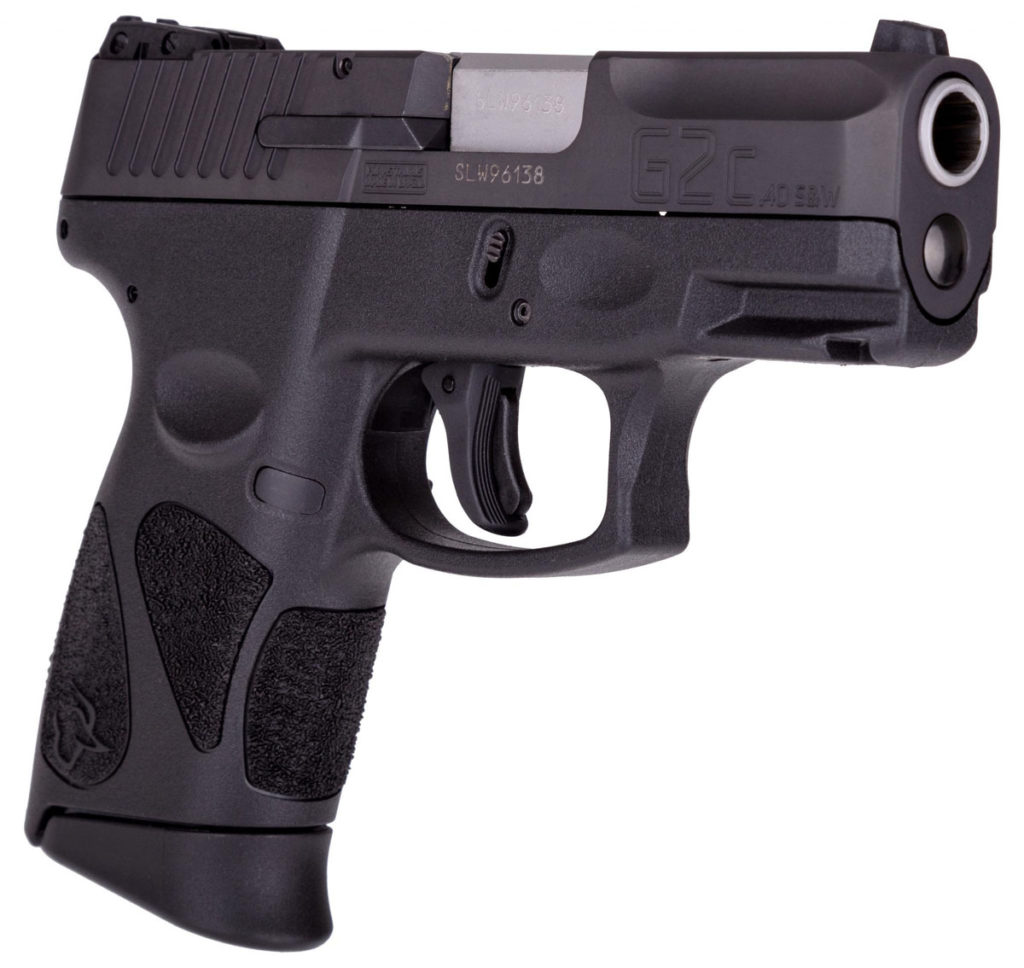 The new Taurus G2c is available in .40 S&W and is an accurate pistol that’s also comfortable for concealed carry.

The new G2C pistol is built on a polymer frame. It has a compact profile, and 10-round magazine capacity (12 rounds in the 9MM model) and was designed to be comfortable for small- or large-handed shooters.

I used the G2C in .40 S&W recently, and it is an accurate and reliable (in what was admitted limited shooting). Comfortable to carry, the G2c also has a trigger which took some time to get used to, but which didn’t affect accuracy.

Range conditions were sunny and 18 degrees Fahrenheit, with little to no wind. To get the best grip on the G2c, I didn’t wear gloves, although I did warm my hands several times in my vehicle over the course of my evaluation.

As the Taurus G2C is clearly meant as a concealed carry/self-defense pistol, I decided on two relatively close-range distances for accuracy testing: shooting offhand at five yards, and from rest and sitting at 10 yards.

The accuracy of the G2C was pretty impressive. At the five-yard mark, every ammunition was able to do five- and four-shot groups of 1.5-inches or less. Top groups included a five-shot group of the Syntech at .88-inches, and two five-shot groups on the Sig V-Crown self-defense right at 1.0-inches. 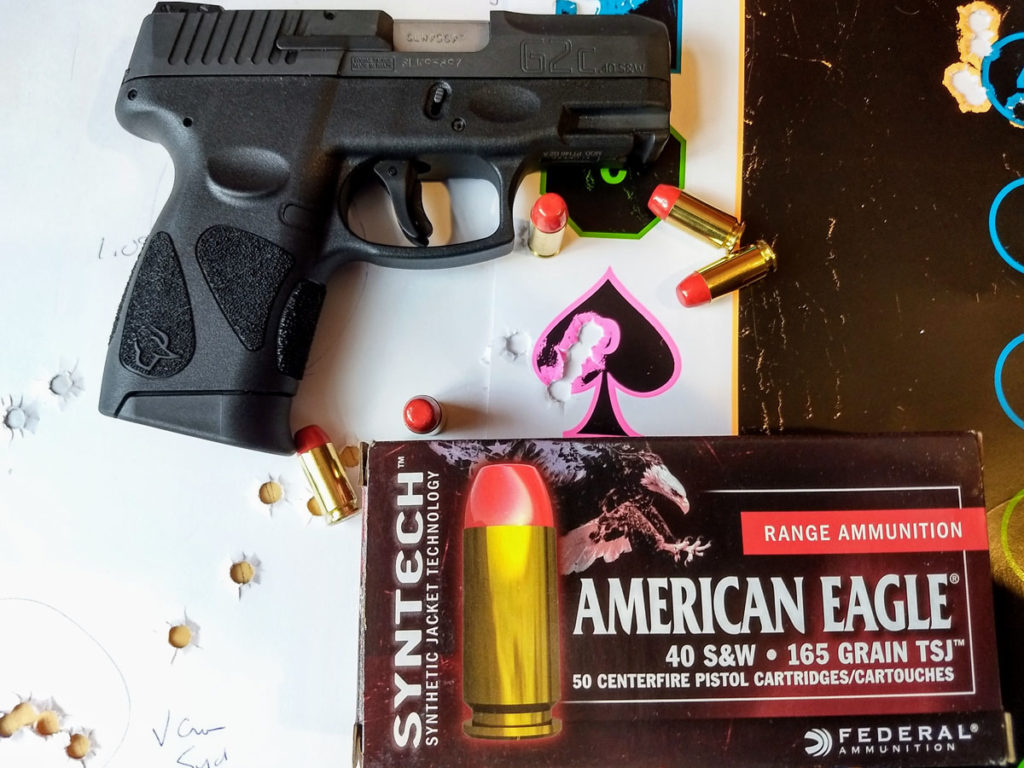 Firing from ten yards and a rest, average groups expanded, but only slightly, and I was still able to place five-shot groups of Syntech at 1.17- and 1.24-inches; Remington UMC at 1.45-inches; and the Remington Golden Saber Black Belt self-defense at 1.65-inches. 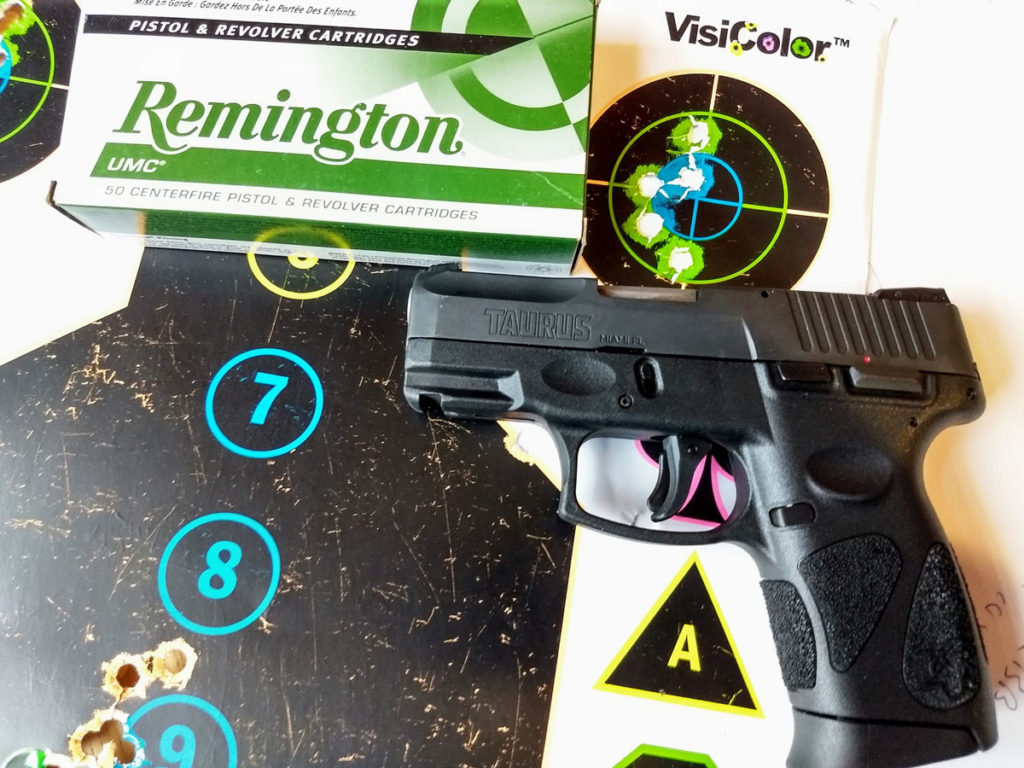 At ten yards and shooting from a rest, accuracy was quite good including this 1.45-inch, five-shot group with Remington UMC range ammunition.

The thing about the Taurus G2c which will cause problems for some shooters is the pistol’s double-action trigger and its very long pull. 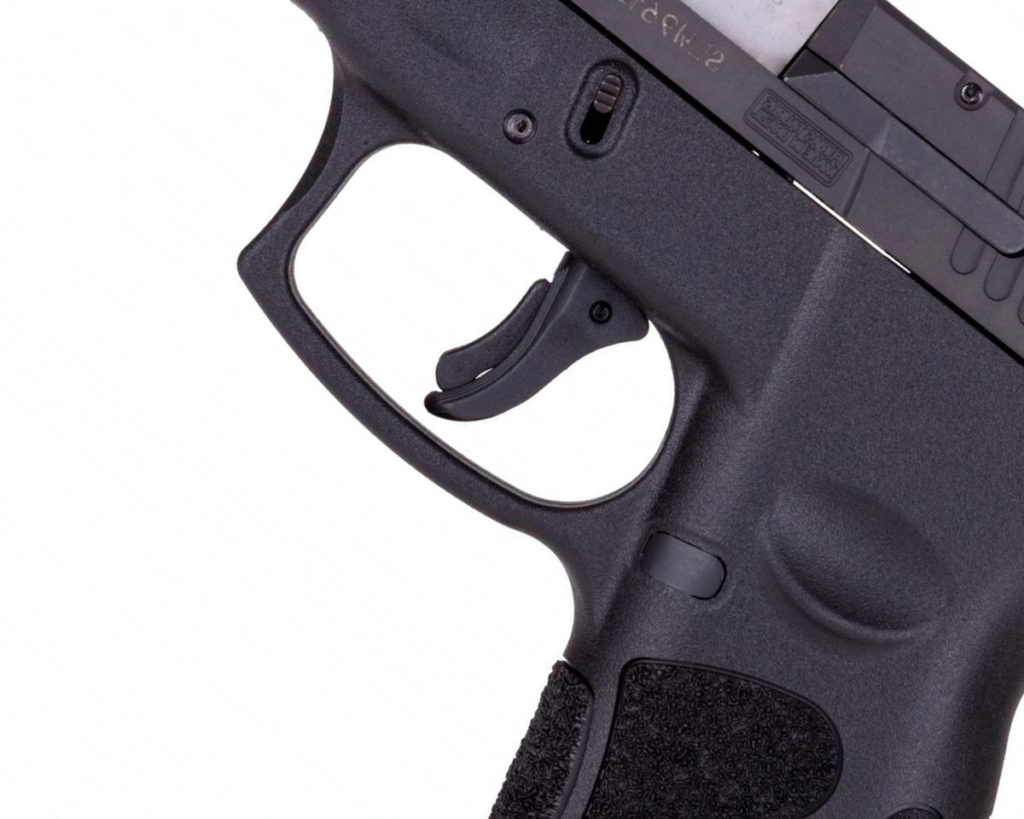 A double-action trigger with a very long pull didn’t affect McCombie’s accuracy–but that pull might throw some shooters.

But, okay, the “restrike” capability is a plus, as it can get you back into the fight quickly should you have a light strike or a primer that’s a bit wonky and needs a second strike to ignite.

Even in the single-action mode, with that first round racked into the chamber and striker partially set, the trigger pull of the G2c is long. I measured one-half-inch of travel before the trigger even begins to engage the striker. In double-action, there’s less than half that pull before the trigger engages.

For some shooters, that length of pull is going to be too much for accurate shooting. These shooters are used to a trigger which engages quickly and fires a round almost immediately.

Yet, given the accuracy I was able to record with the Taurus G2c, there’s no inherent reason the trigger has to cause pulled shots. You could also argue that the longer pull also adds another level of safety. Under stress, a person might have their finger on the trigger before they know if there is truly a threat coming at them or not. The G2c’s trigger would provide the split-second ability to let off before you take a bad shot.

The G2c’s rear sight is adjustable and has a white dot on either side of the notch. The notch itself is nice and wide—it lines up quickly with the front post, which also sports a white dot. 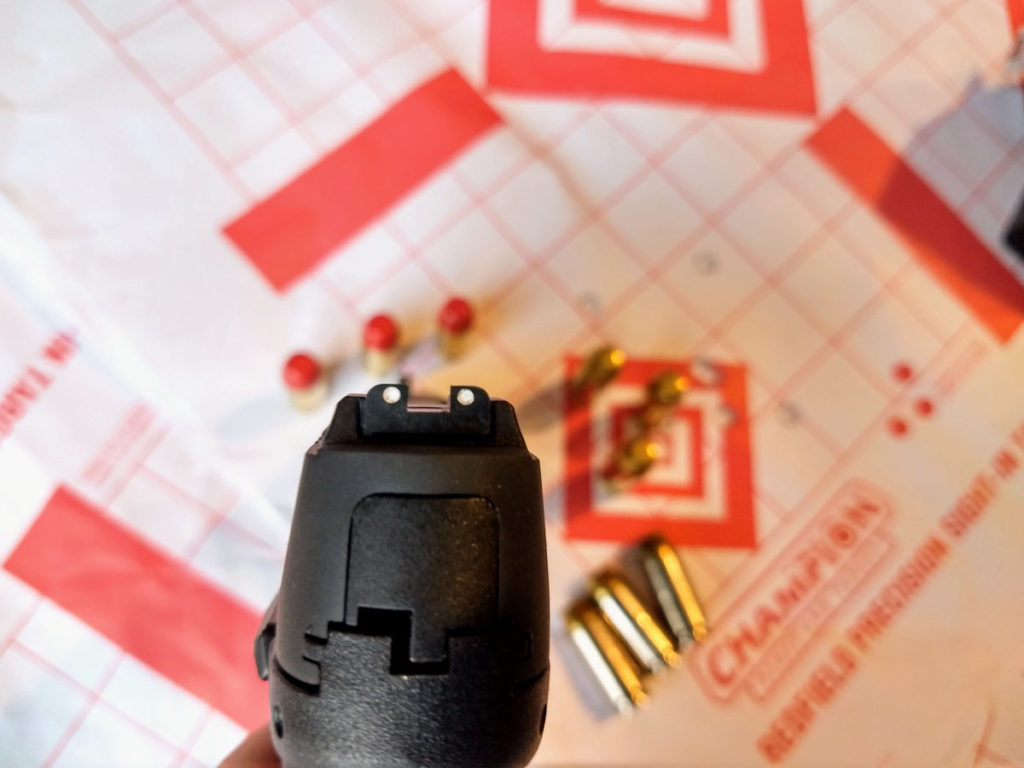 A generous and easy-to-find rear notch lines up quickly with the front post, putting you on a target fast.

The manual safety on the left side of the slide is easy to reach with the thumb of your shooting hand (for righties) and snaps into and out of SAFE with a click, I could hear and feel. The trigger also has a bladed safety. 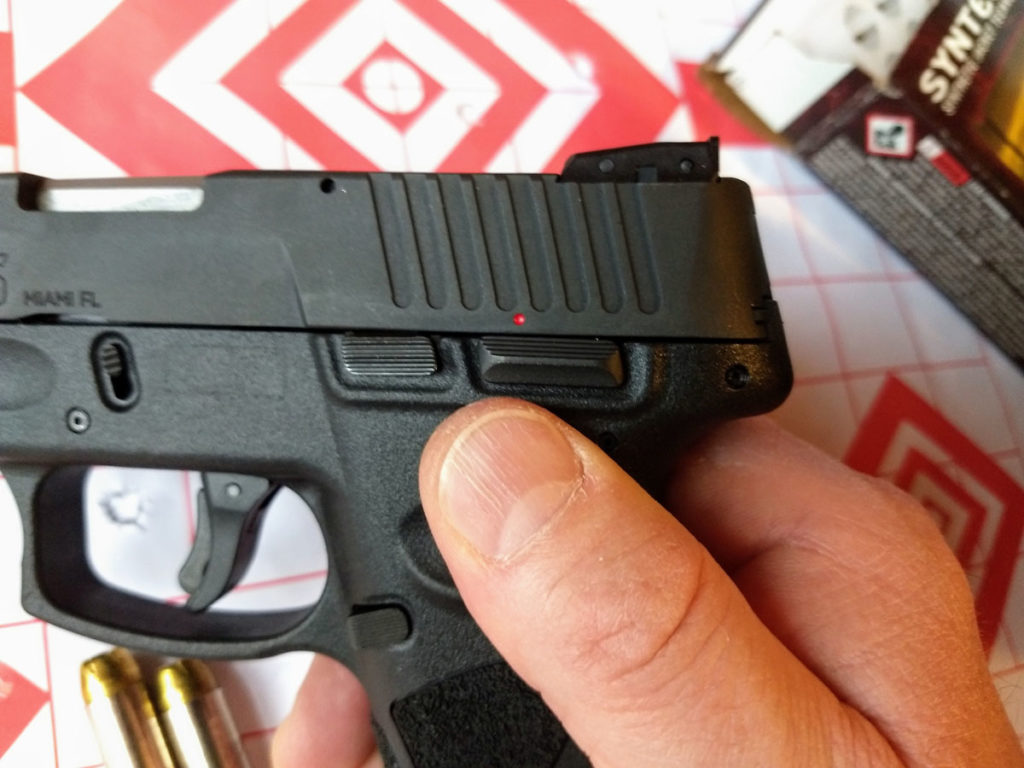 Easily worked with the right-hand thumb, the G2c’s manual safety snaps into and out of SAFE with a click you can hear and feel.

The G2C also features a load indicator atop the slide and just behind the chamber that pops up when a round is chambered. At a glance, you can tell if the pistol is loaded. In the dark, you can also check by sliding your finger over the indicator. 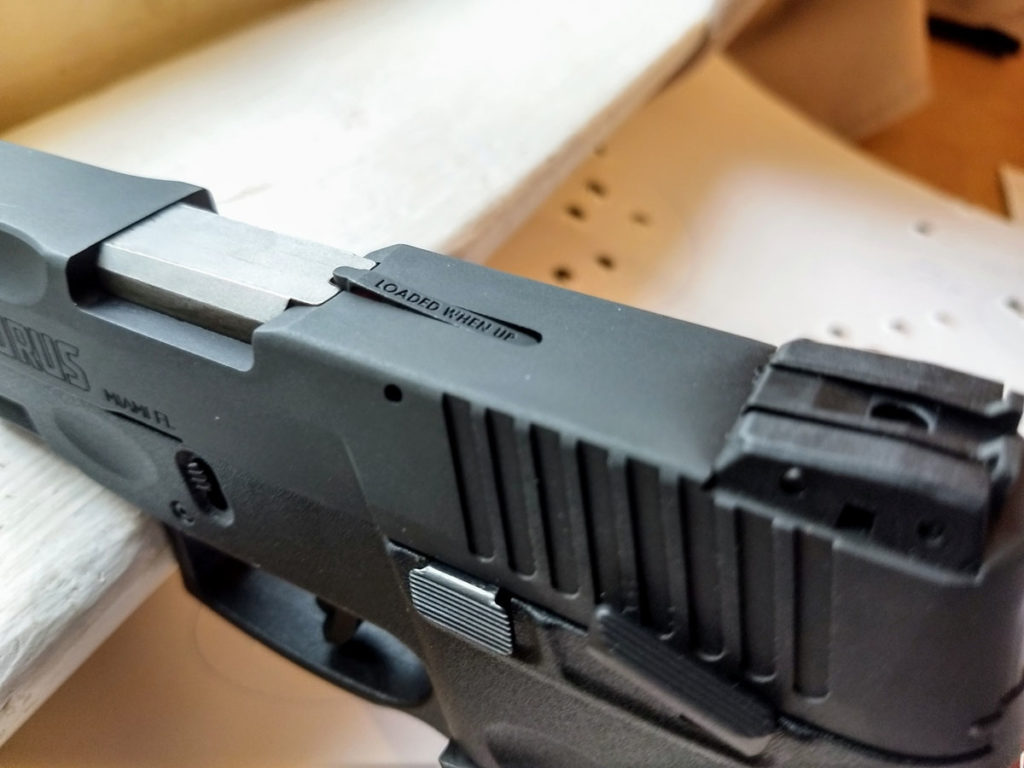 The magazine release can be switched to either side, and the release pops out the magazine forcefully enough for one-handed mag changes.

The grip features aggressive stippling sections along the sides, the front strap, and the back strap, and that texture gave me a very firm grip throughout all my shooting. There’s even a short section of Picatinny rail built into the frame under the barrel for accessory attachment. 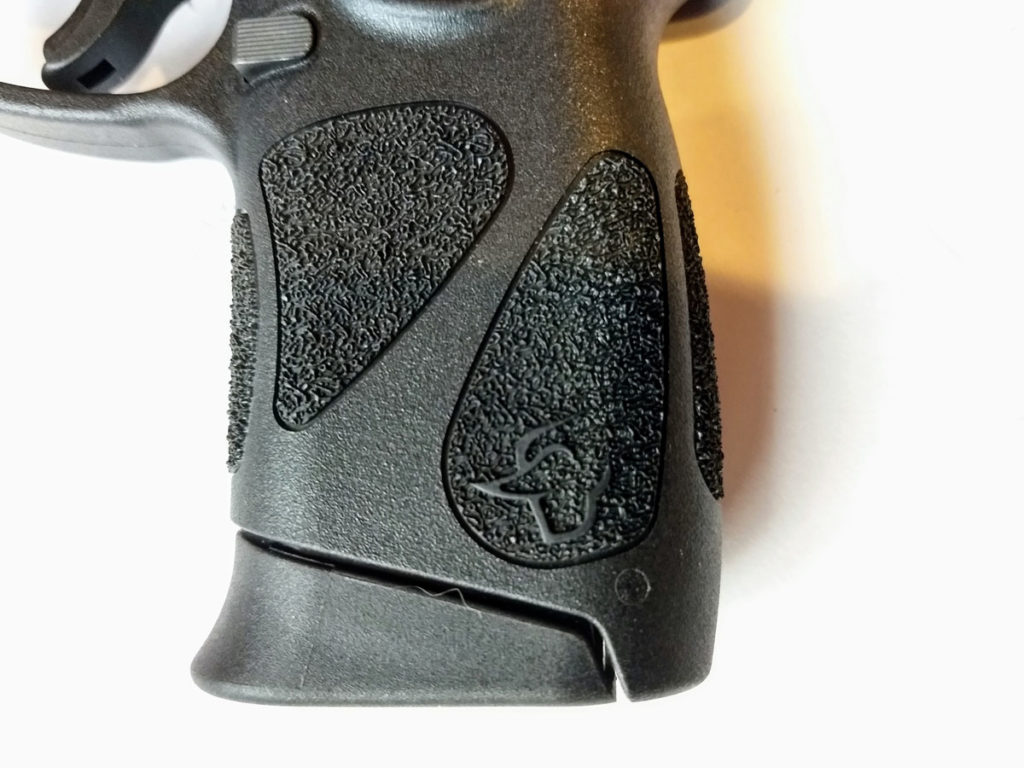 Aggressive stippling on the grips, front strap and backstrap provide a very solid hold on the G2c. 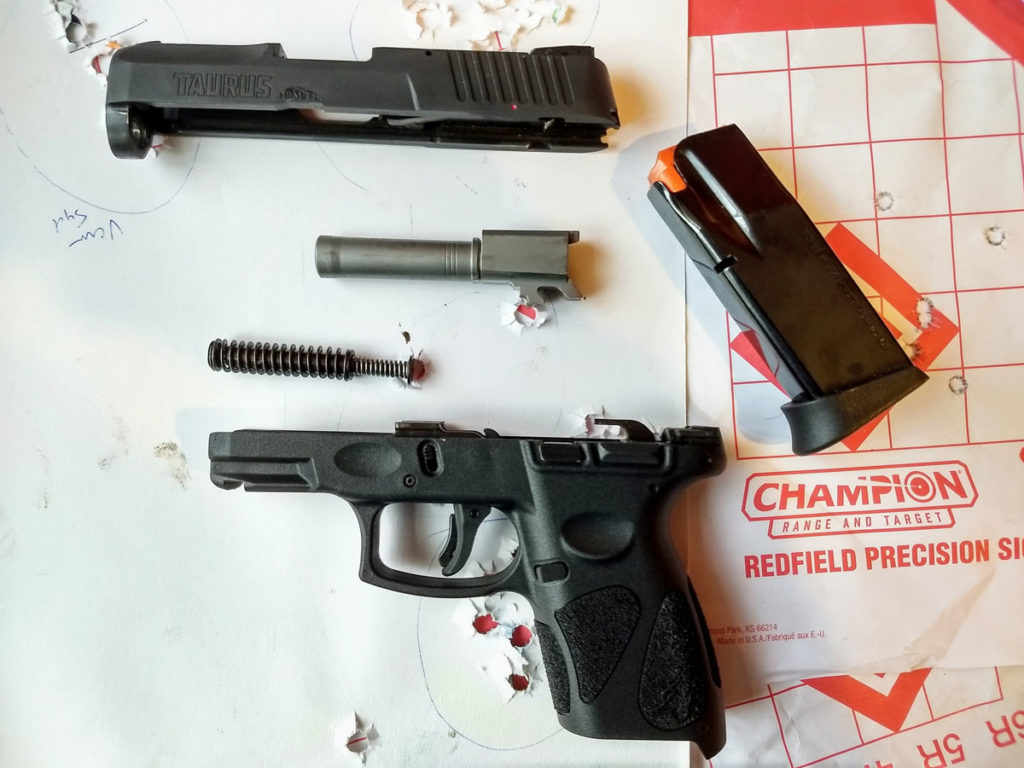 With a little practice, the G2c pops apart in seconds for cleaning.

In approximately 200 rounds, I had one failure to feed with the G2c. This occurred at around Round 50 with the tenth round of the Syntech brand of ammunition. The nose of the Syntech bullet held up on the feed ramp and the slide came forward and jammed the pistol. I cleared the pistol, then used a paper towel to clean off the feed ramp. After this, I had no other problems with the next 150 rounds I fired.

I also concealed carried the G2c for a couple of days and found it to be very comfortable under a shirt or coat, even with all-day carry.

Taurus lists the suggested retail price of the G2c at $316 for the model I used. (The G2c is also offered with a stainless-steel slide for an additional $20.) However, multiple websites list both models for right around $250, shipping included. That strikes me as a lot of pistol, loaded with a good many features, for well under $300. And into the bargain, a shooter gets a more powerful round than the 9MM, though with two fewer rounds.

Me? I’ll take the harder hitting round over additional capacity, though that’s a personal choice every concealed carrier has to make. 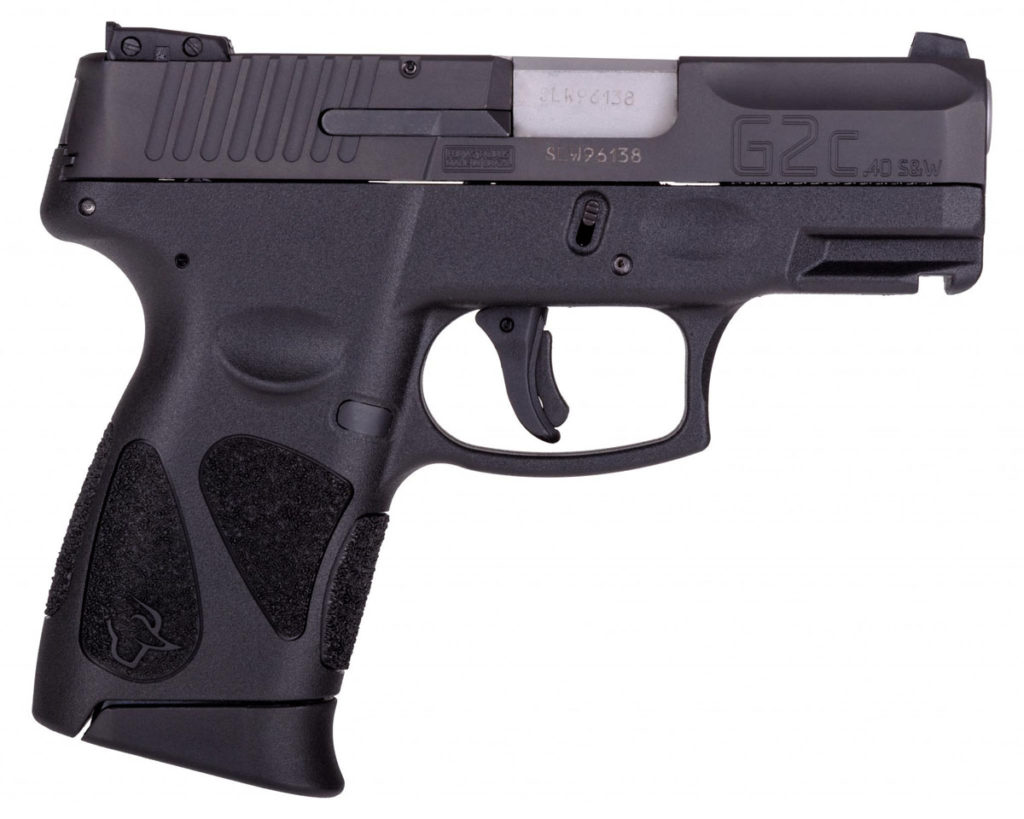 With street prices of $250, plus numerous features, the Taurus G2c looks like a great buy.