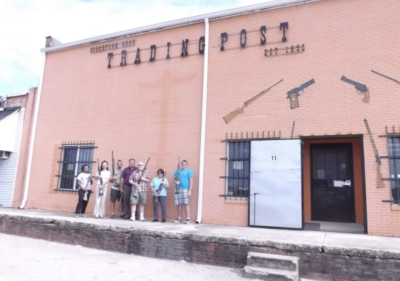 California has so many stupid gun laws on the books that it’s hard to keep track. Good news this week, though, there is one less [sic] dumb law to worry about.

The U.S. District Court for the Eastern District of California is now blocking the enforcement of a ban on the display of handguns and handgun signs on the outside of retail locations, i.e. FFLs.

Section 26820 of the California Penal Code reads, “No handgun or imitation handgun, or placard advertising the sale or other transfer thereof, shall be displayed in any part of the premises where it can readily be seen from the outside.”

Gun shops could advertise the sale of long guns, including modern sporting rifles, under the statute but when it comes to publicly showcasing handguns the Nannystaters of Commiefornia said, “No, no, no.”

Imagine a law prohibiting a church from publicly displaying scripture or one banning a car dealer from advertising the sale of trucks. Insane!

The Second Amendment Foundation (SAF), in conjunction with the Calguns Foundation and the California Association of Federal Firearms Licensees, on behalf of Tracy Rifle and Pistol (TRAP), Ten Percent Firearms, Sacramento Black Rifle, Inc., and PRK Arms sued former state Attorney General (current U.S. Sen.) Kamala Harris and the chief of the state Department of Justice Bureau of Firearms in 2014 asking for an injunction on the grounds that the code violates the First Amendment rights of gun dealers.

Though it took several years, justice (and common sense) prevailed Tuesday. The court found that the state’s claim that the statute works to reduce gun-related violence was bogus, noting that the state failed to show that the ban had any “effect on handgun suicide or crime.” Further, the court ruled that California “has restricted disfavored speech without acknowledging the efficacy of policy choices that do not burden speech.”

Additionally, the court said, “California may not accomplish its goals by violating the First Amendment” and declared the challenged section “unconstitutional on its face.”

“A state cannot legislate political correctness at the expense of a fundamental, constitutionally-delineated civil right,” said SAF founder and Executive Vice President Alan M. Gottlieb in a press release. “We were delighted to offer financial support to this case.”

“Today, the Court correctly ruled that the First Amendment protects truthful, non-misleading speech about handguns protected under the Second Amendment,” said CGF Executive Director Brandon Combs. “People have a fundamental, individual right to buy handguns and licensed dealers have a right to tell people where they can lawfully acquire those handguns. Today’s ruling means that the government cannot prevent people, or gun dealers, from talking about constitutionally protected instruments and conduct.”

No word yet on if the state plans to appeal the ruling. The case is known as Tracy Rifle and Pistol, LLC v Harris.

Next post: Clay’s Guide to Urban Defense: Ep. 5 Surviving In A Concrete Jungle