Emma Gonzalez of March For Our Lives: ‘We don’t want to take guns away, We’re pro-2A’

Parkland survivor Emma Gonzalez wants you to know that she’s not after your guns. In fact, if you’re a law-abiding gun owner, the aims of her organization, March for Our Lives, has nothing to do with you.

“We try our very darndest to get out the fact that we don’t want to take away guns and that we are pro second amendment,” Gonzalez told Variety in a recent interview. “We’re not trying to take guns out of society, we’re trying to regulate them.”

“If you’re already a responsible gun owner, then this has nothing to do with you,” Gonzalez continued. “We’re talking about the people that are irresponsible, the people who take advantage of the fact that the system is not very strict.”

She’s lying… Or, she hasn’t read the “How We Save Lives” section of the March For Our Lives website. Because numbers 4 and 5 on the list clearly call for banning firearms and accessories in common use, which would violate the 2A as outlined in the landmark 2008 Heller decision. 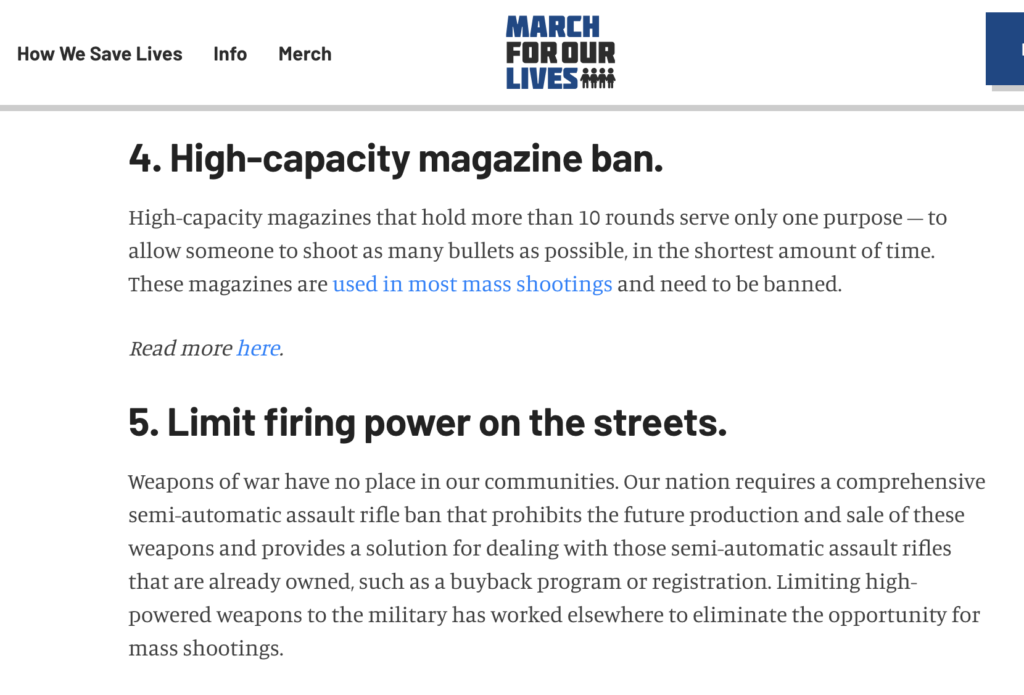 I will be honest, I think Gonzalez is a sweet kid.  She’s earnest and charming in a neighborly sorta way. She has a future in politics if she wants one.

But empty-headed rhetoric is no way to begin a career.  When she blithely declares that March For Our Lives is pro-2A when it’s clearly not, she immediately loses all credibility with gun owners.

If she follows the “Read more here” link on her own website she’d realize that of the nine states that prohibit certain magazines, five have implemented a retroactive (ex post facto) ban on the accessories (It’s actually four — CA, NY, NJ, HI — states and the District of Columbia).  Which means those “responsible owners” that “this has nothing to do with” were actually forced to surrender, destroy or permanently modify their lawfully owned property.  Big Brother did come for their magazines.

Advocating for a “buyback” program with respect to “weapons of war” is also directly calling for the seizure of lawfully owned property.  The government never possessed the rifles (rifles that are not “weapons of war,” by the way, but civilian versions of real weapons of war) it supposedly would “buyback.”  So, calling it a buyback is wrong.  It’s not.  It’s a confiscation scheme. Not understanding this is unacceptable, particularly for someone who claims to be “pro second amendment.”

Am I wasting my time by pointing this out?  Yes.  Emma will never read any of this.  But for the young people who may,  it’s important for them to understand that if you’re going to stand for something, make sure you do your homework and that you know what the heck you’re talking about.  Otherwise, you come across as a wide-eyed idiot.

Next post: Remington’s Got a New 12-Gauge Semi-Auto Firearm and New Shells

Previous post: What I love & Hate About the Exodus Gunleather Paddle Holster