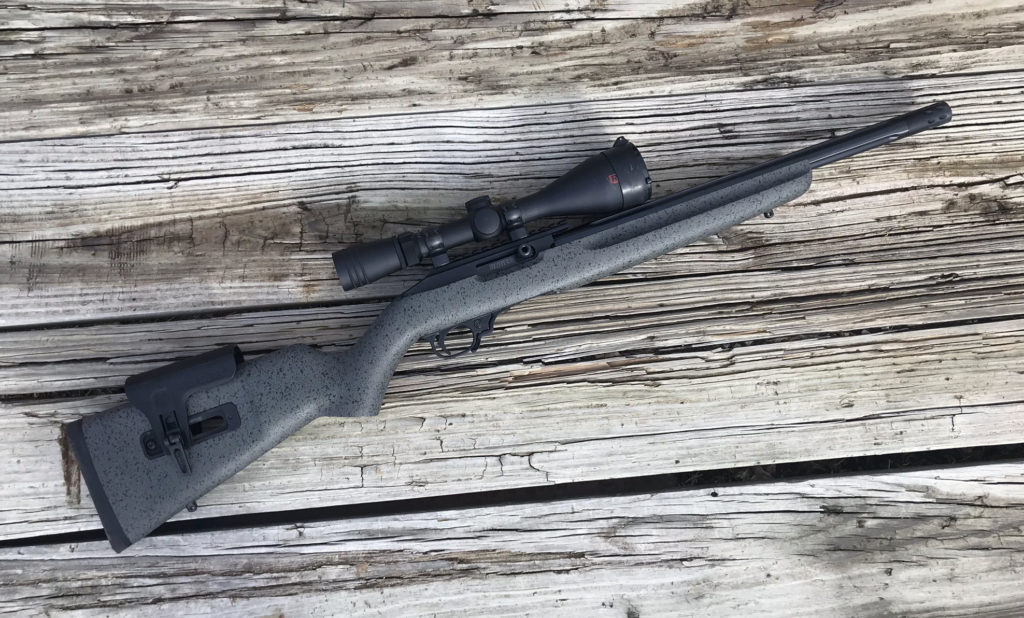 If “high-end 10/22” sounds like a contradiction in terms, you’re not alone. Ruger’s legendary plinker has been a mainstay of gun safes for decades, but any old-timer will tell you that dressing up a 10/22 is kind of like putting custom wheels on your faithful old pickup. You love that truck, but those rims make it look like you’re compensating for something.

But welcome to 2019! Donald Trump is president, the economy is great, and people are spending more than $1000 on a semi-automatic rifle chambered in .22 LR.

Personally, I love this brave new world. Super-accurate .22’s are fun, plain and simple. Plus, they’re cheap to shoot, so even though you’re never telling your wife how much you spent on that barrel, you’re happy to report that you only dropped $30 on that Bucket O’ Bullets you burned through last weekend.

Ruger, at long last, has taken notice of the aftermarket 10/22 world and late last year the company’s new Custom Shop put together the 10/22 Competition Rifle. It’s a sweet shooter and it comes with all the bells and whistles you’d expect from a premium .22 firearm.

But how does it stack up against a custom build? That’s the question I wanted to answer so I reached out to one of my gun buddies who owns one. Before we get down to the nitty-gritty, you should know a few things about Ruger’s new Competition 10/22. 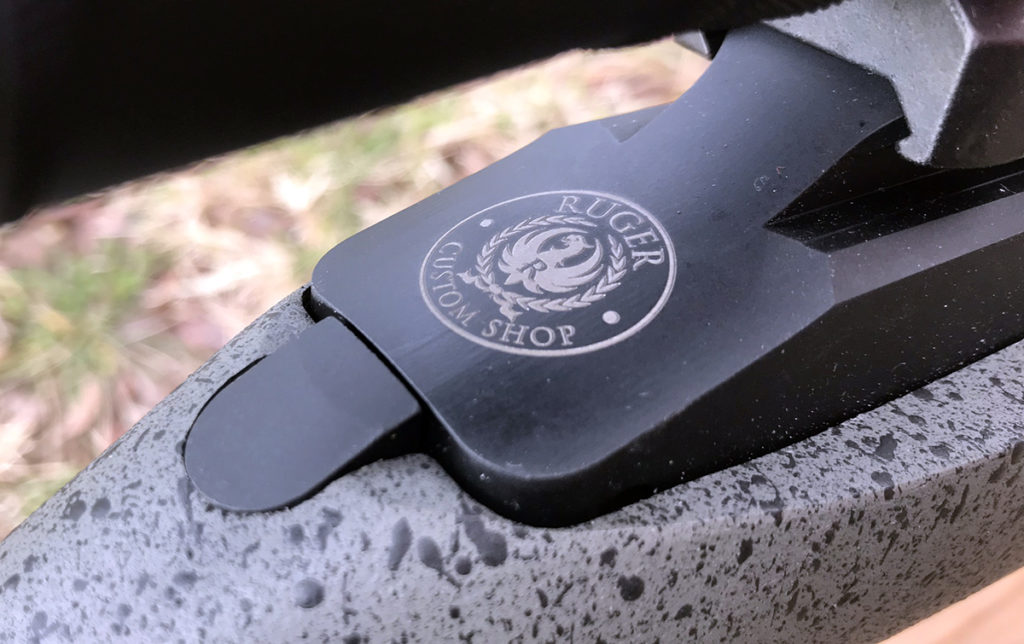 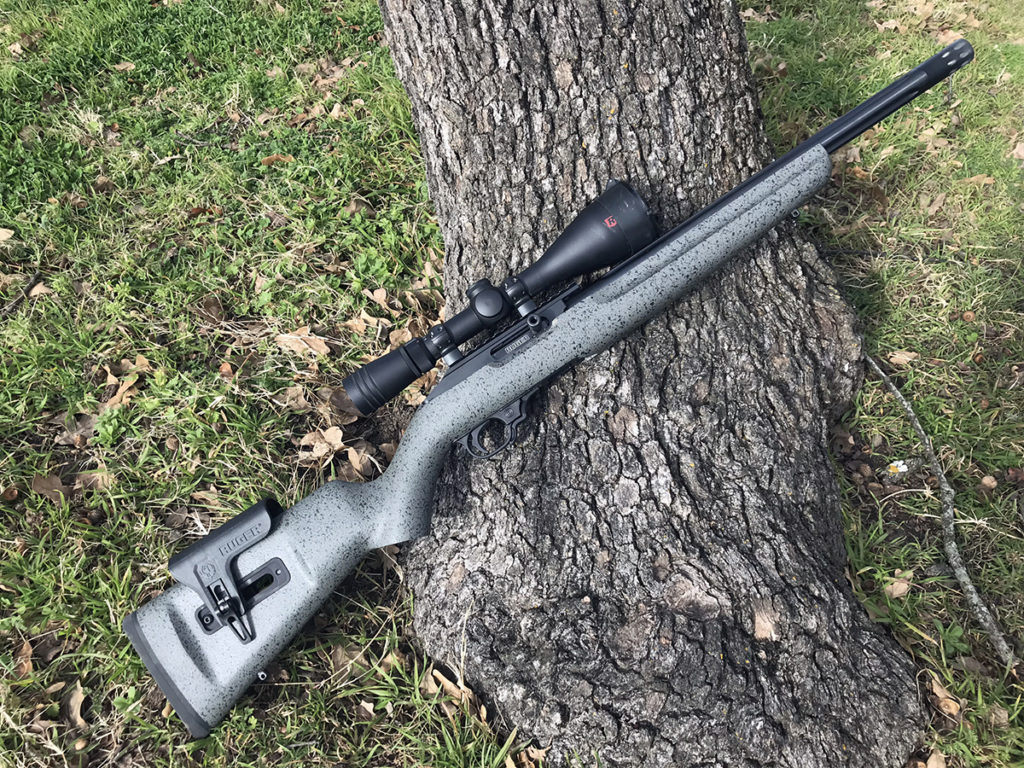 The Competition 10/22 is loaded with features, all designed to improve accuracy and shootability.

You can find the full list of features here, but I wanted to highlight a few that stood out to me.

The stock is great. It’s laminate and speckled with an attractive, not-too-rough texturing. The comb can be adjusted both horizontally and vertically with a small latch located on the right side of the firearm. While an adjustable stock is less necessary on a 10/22 than a long-range shooter, it’s still handy to get a solid cheek weld no matter the shooting position.

Ruger’s engineers rounded the fore-end and cut grooves along both sides, which reduces the bulk as compared to Magpul’s Hunter stock. The butt also uses a more traditional profile, and while I’m partial to the squared tactical stocks so popular these days, Ruger’s design maintains the simple usability we’ve come to love in the 10/22. 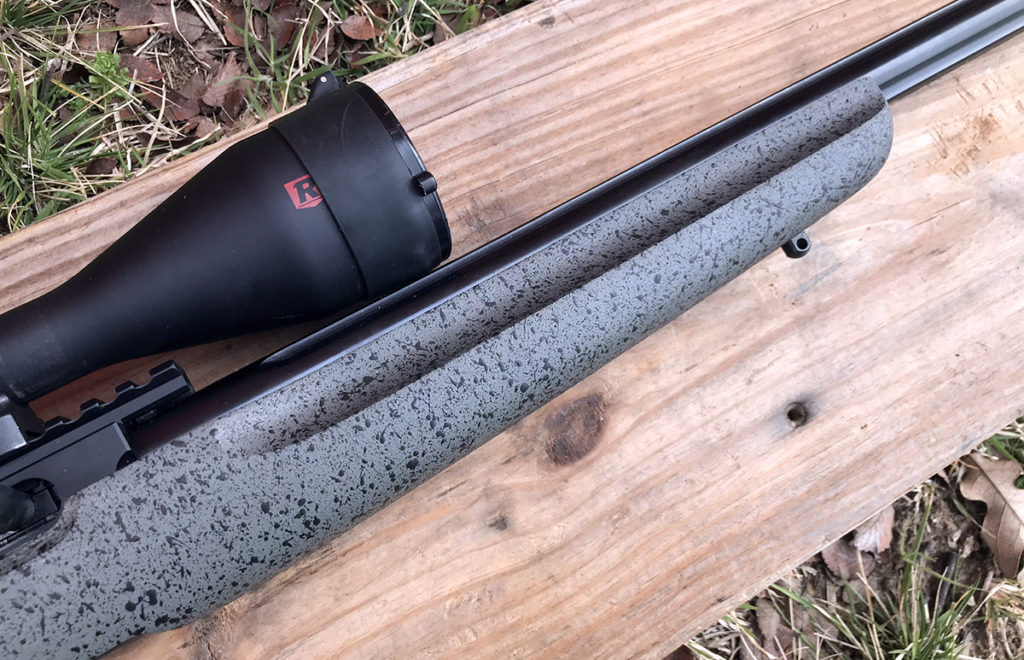 The fore-end is rounded and grooved. 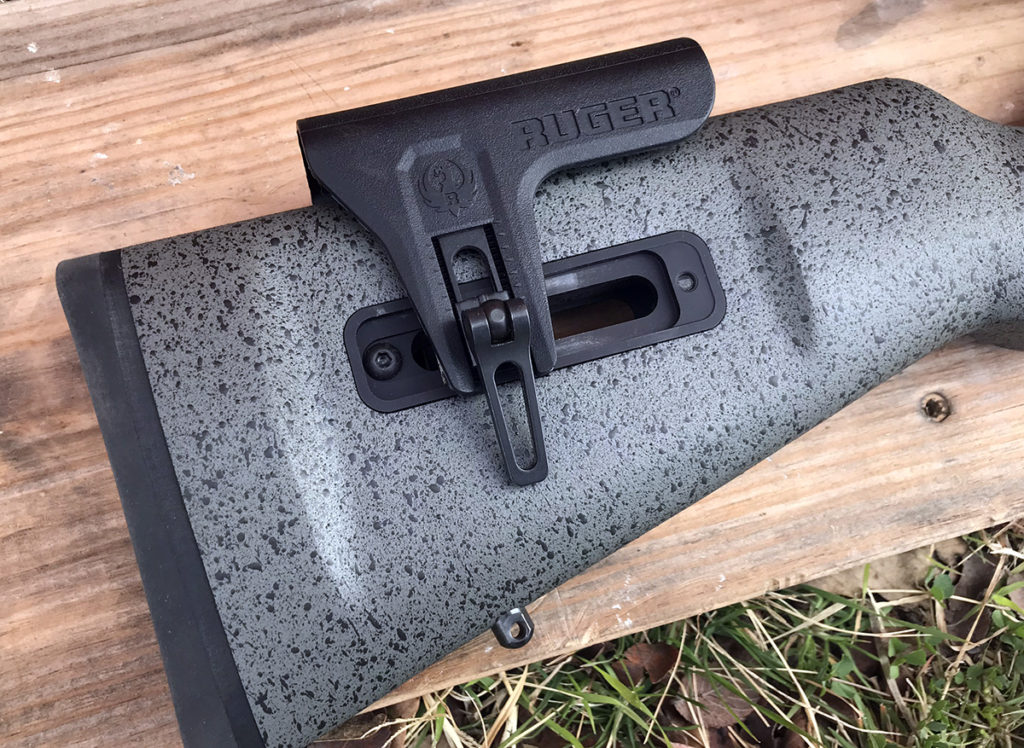 The comb can be adjusted both vertically and horizontally with a simple latch.

Moving to the other point of contact between the shooter and the gun, the trigger has been lightened with Ruger’s aftermarket BX-Trigger, but it isn’t much of an improvement over the standard 10/22 model.

I had the opportunity last summer to build a 10/22 using Brownell’s BRN-22 receiver, and I opted for the basic trigger assembly. Comparing the two triggers side by side, the BX-Trigger is roughly three pounds lighter – 2 pounds on the BX versus 5 pounds on the standard – but the enhanced trigger doesn’t make any noticeable improvements on crispness, pre-travel, or over-travel.

Like the standard model, the BX has the slightest bit of takeup before a semi-clean break. There is virtually no over-travel, and the reset *click* is small (both in terms of volume and feel) but noticeable.

The trigger isn’t bad by any means. But while a lighter trigger helps with precision work, a crisp break is, in my opinion, even more important. I expected a more obviously superior trigger on this Competition Rifle from the Custom Shop, and while it’ll get the job done, serious competitors might consider a premium aftermarket trigger or a trigger job from a reputable gunsmith. 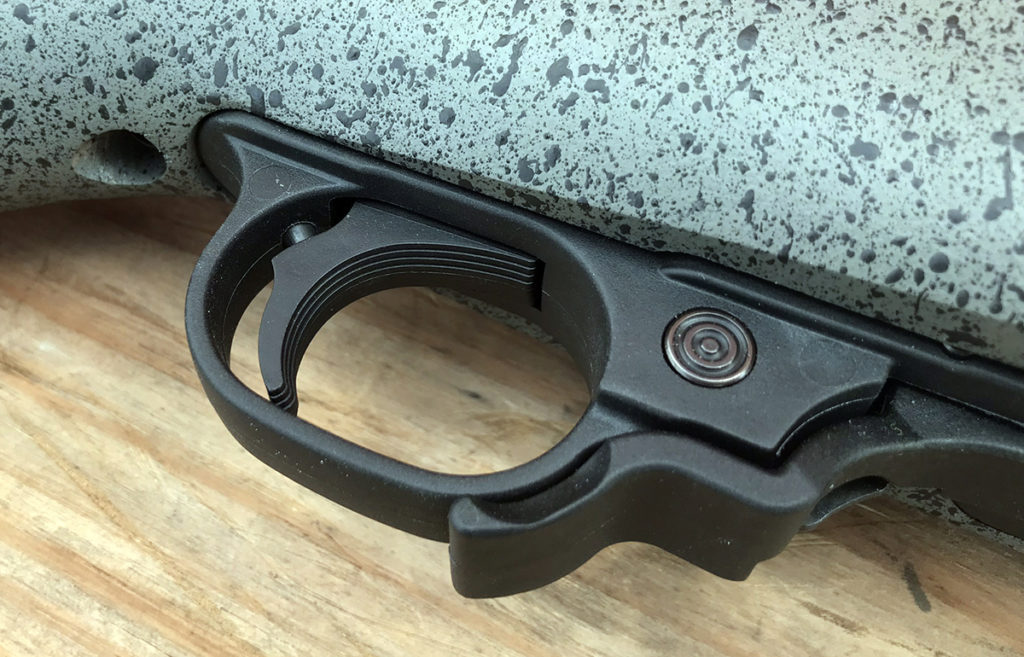 The action, on the other hand, is noticeably superior. The bolt is heat and nitride-treated and I found it to be both tight-fitting and buttery smooth. The receiver is also improved over a standard 10/22. It features two bedding lugs to ensure a secure fit, a 30-MOA Picatinny rail, and a hole in the rear of the receiver to allow access to the bore.

The 16-1/8” barrel is also an improvement. It’s fluted to reduce weight and cold hammer-forged. It also comes suppressor-ready with a ½”x28 thread pitch as well as a muzzle brake. 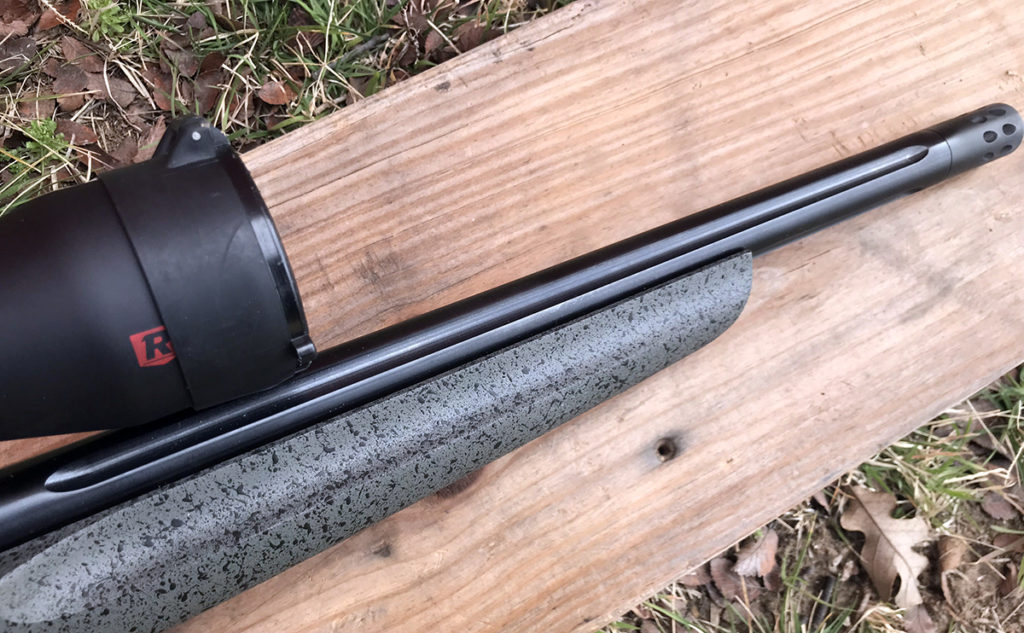 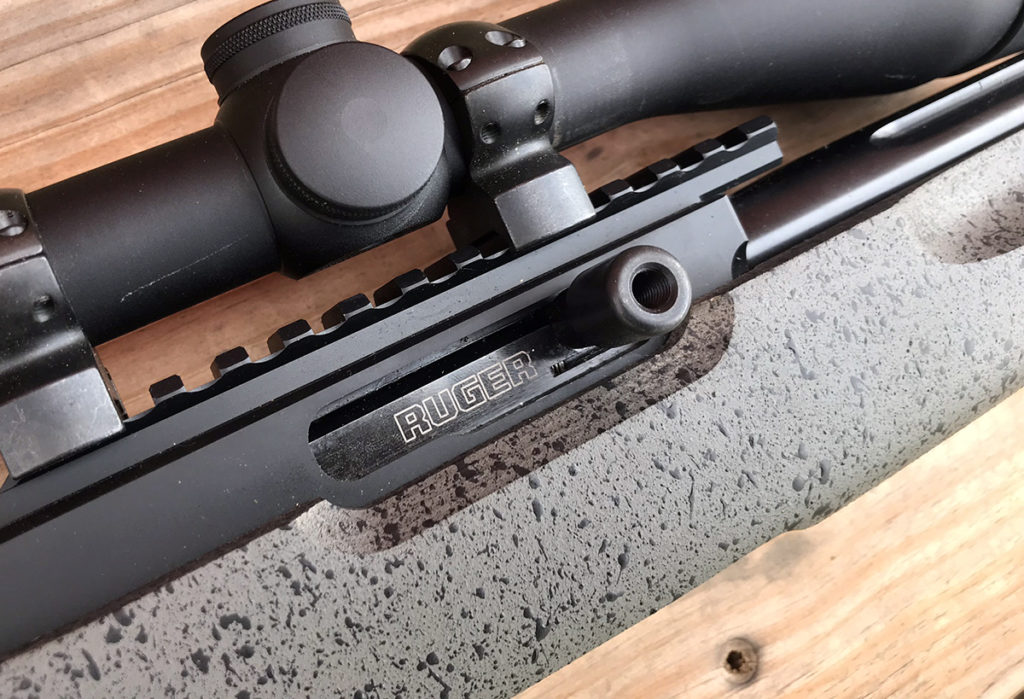 The action is super-smooth, thanks in large part to the match-grade bolt. 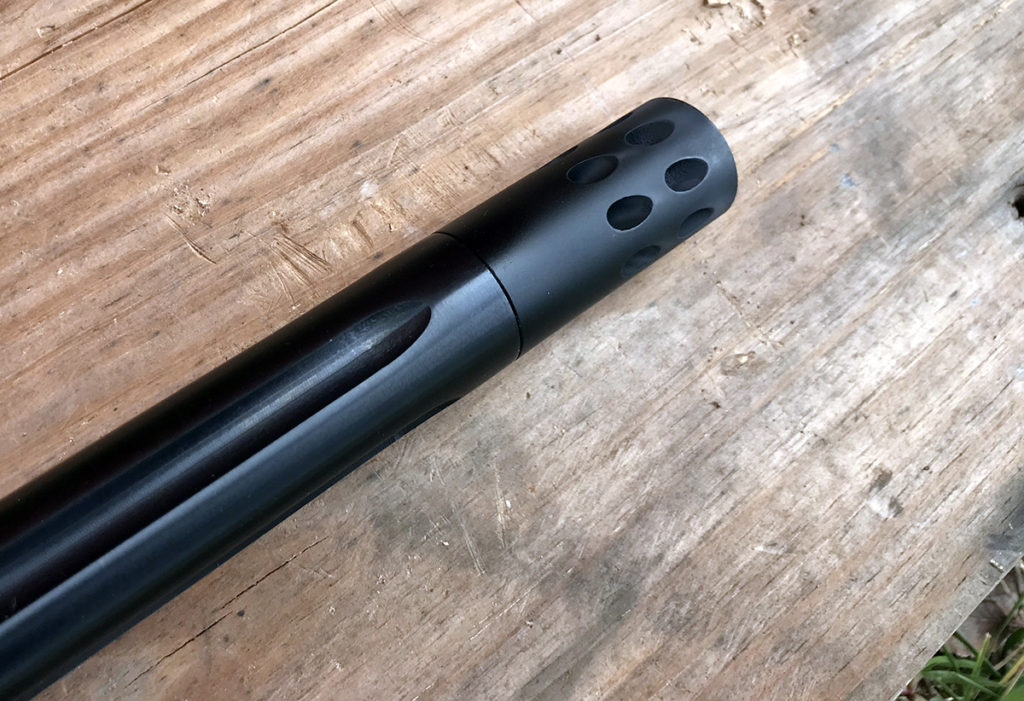 The barrel is threaded for muzzle brakes and suppressors. 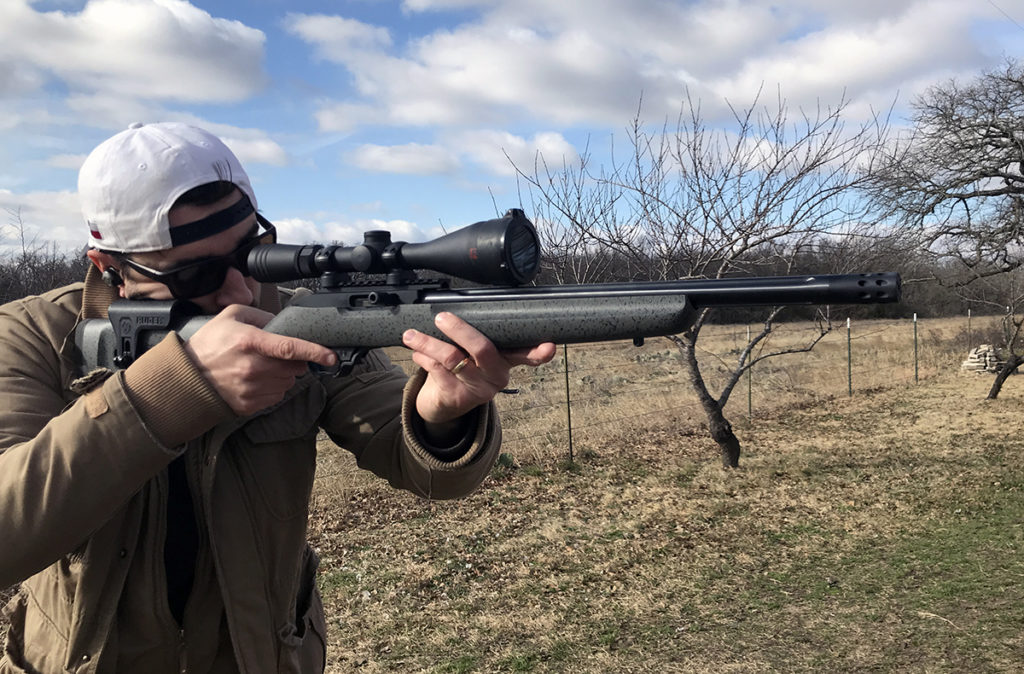 The Competition 10/22 would also be a blast to shoot with a red dot.

The barrel, combined with the match CNC-machined bolt, can be credited for the gun’s excellent accuracy. I conducted my testing from 50 yards using a Caldwell Lead Sled and a 3-9x scope. I shot five five-shot groups with each cartridge and let the barrel cool slightly between each set of groups.

As you can see, three out of the four cartridges averaged groups less than one inch, and all produced at least one group under 0.7 inches. The gun performed the best with the CCI, but the Federal and Aguila weren’t far behind. 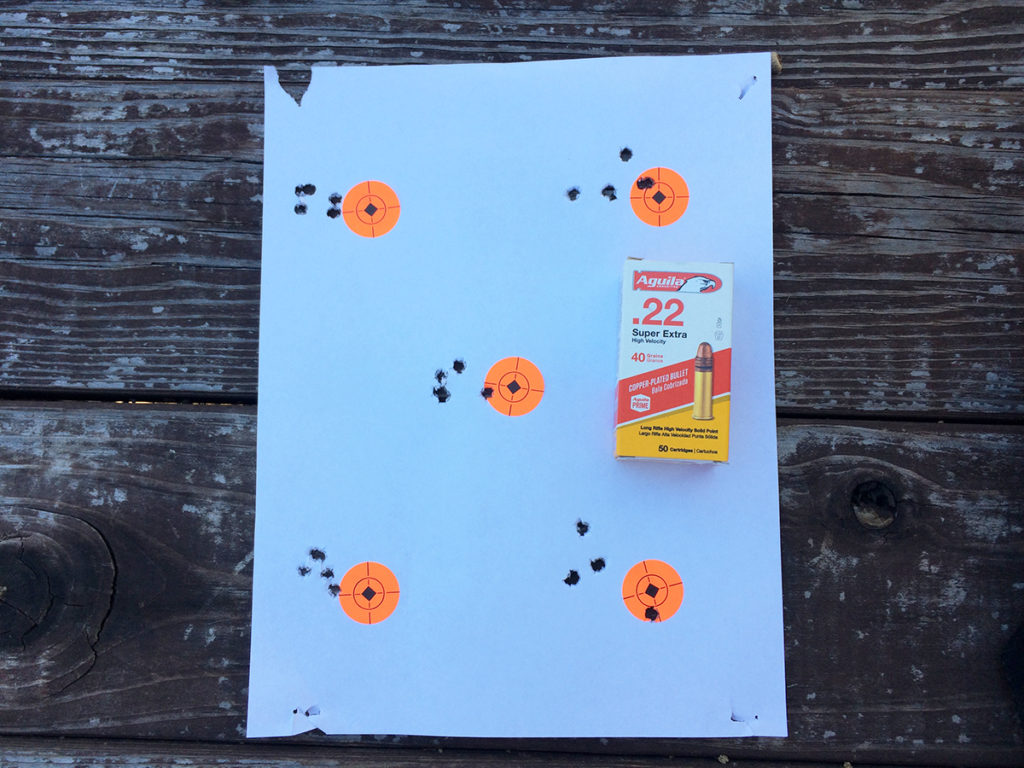 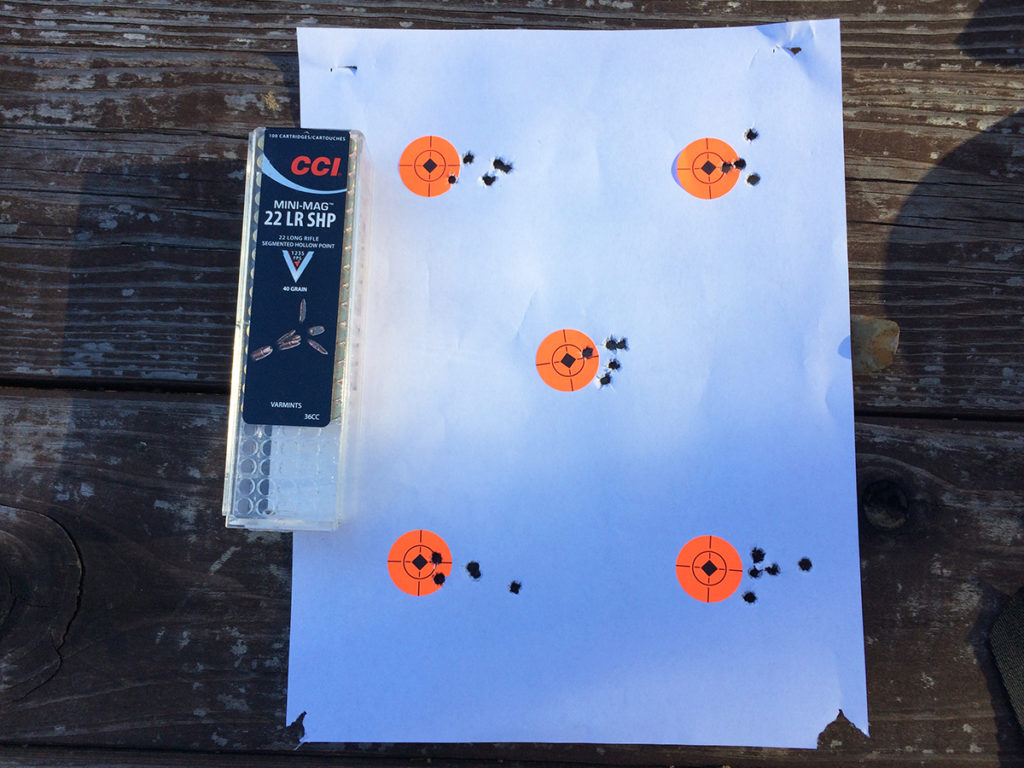 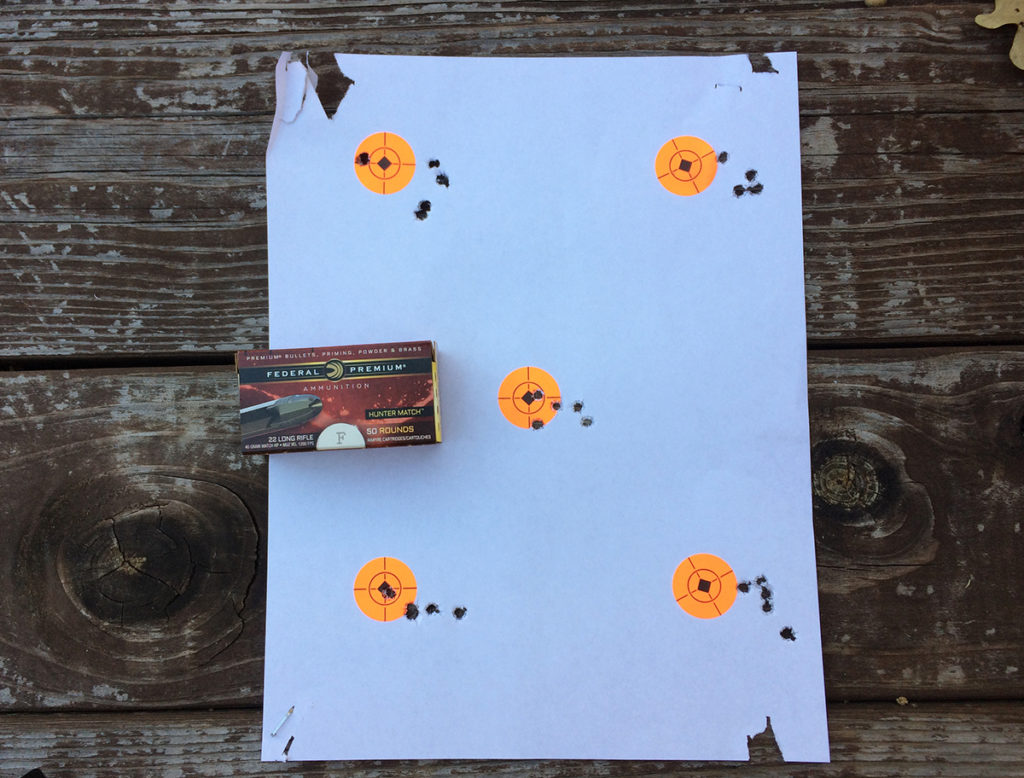 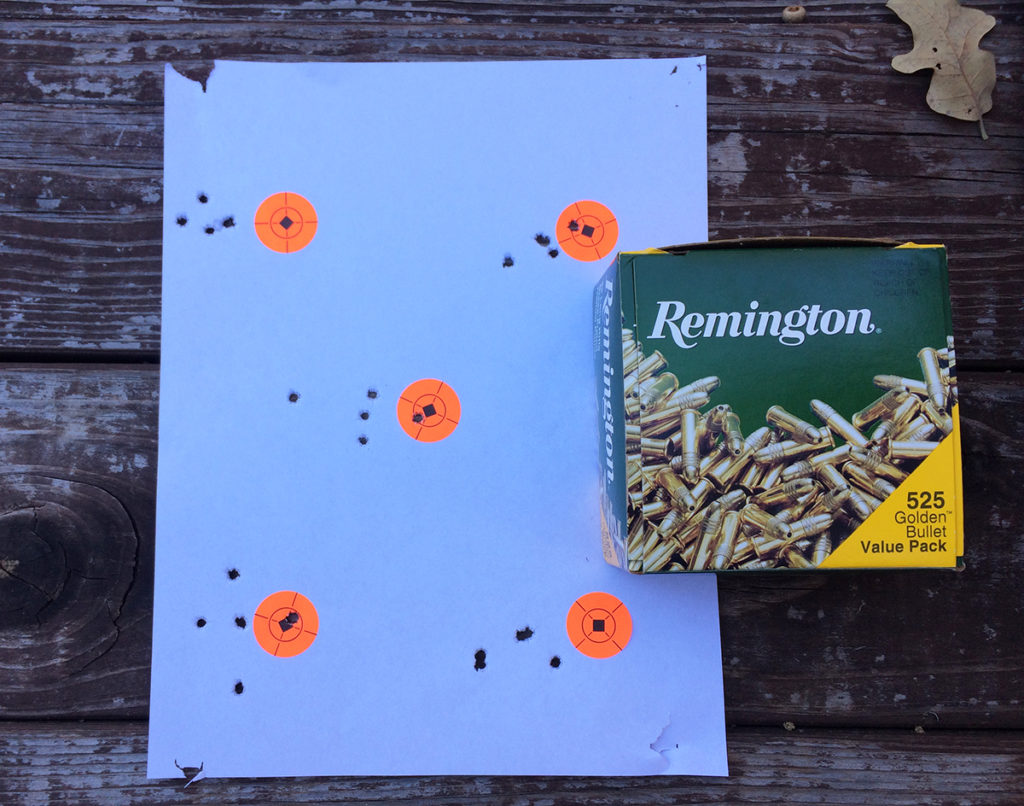 Shootability is great as well. At six pounds without an optic, it can be shot easily from the standing position, and the adjustable comb allows for a consistent cheek weld from any position. Recoil is virtually non-existent, of course, and the light trigger makes quick follow-up shots a breeze.

The gun’s minimal recoil and shot report make this rifle an excellent way to introduce a new shooter to firearms. I brought my father to the range with the Competition 10/22, and even though he hadn’t had much previous shooting experience, he took to this rifle like a duck to water. A red dot sight can also be mounted to the Picatinny rail, which I’ve found to be the perfect optic for a new shooter.

Meet the Practical Rimfire Challenge (PRC). The PRC is the rimfire take on the super-popular Precision Rifle Series (PRS). It features a variety of stages with targets from 25 to 300 yards and forces shooters to engage from a variety of shooting positions.

I spoke with Cole McCulloch, owner of the outfit that runs PRC matches, the Peacemaker National Training Center. He emphasized that even though the PRC looks like the PRS, it’s in a category of its own.

“PRC is not and never was intended to be ‘little PRS,’” he said via email. “The PRC is designed to provide the full test of shooter, .22LR rifle, ammo, and optics out to 300 yards, and in some cases out to 500.”

I haven’t competed in the PRC, but it seems like a great venue for Ruger’s new Competition 10/22. You won’t win any Olympic competitions with a semi-auto, but Ruger’s gun is tailor-made for this kind of setting – it’s light enough to carry while scrambling around barriers and accurate enough to engage targets out to 300 yards.

“The Ruger Competition 10/22 will be ideal as its focus and features are driven to promote enhanced accuracy,” he said. “The beauty of the PRC is that a variety of bolt and semi-auto platforms can be used and it’s affordable for people to shoot.”

The PRC is only in its third year, but they’ve been adding matches every year, and they’re backed by some of the biggest companies in the business. If you’ve always wanted to compete but haven’t been able to find the right match, check out the PRC. They’ll be announcing their 2019 match schedule in the next two weeks. 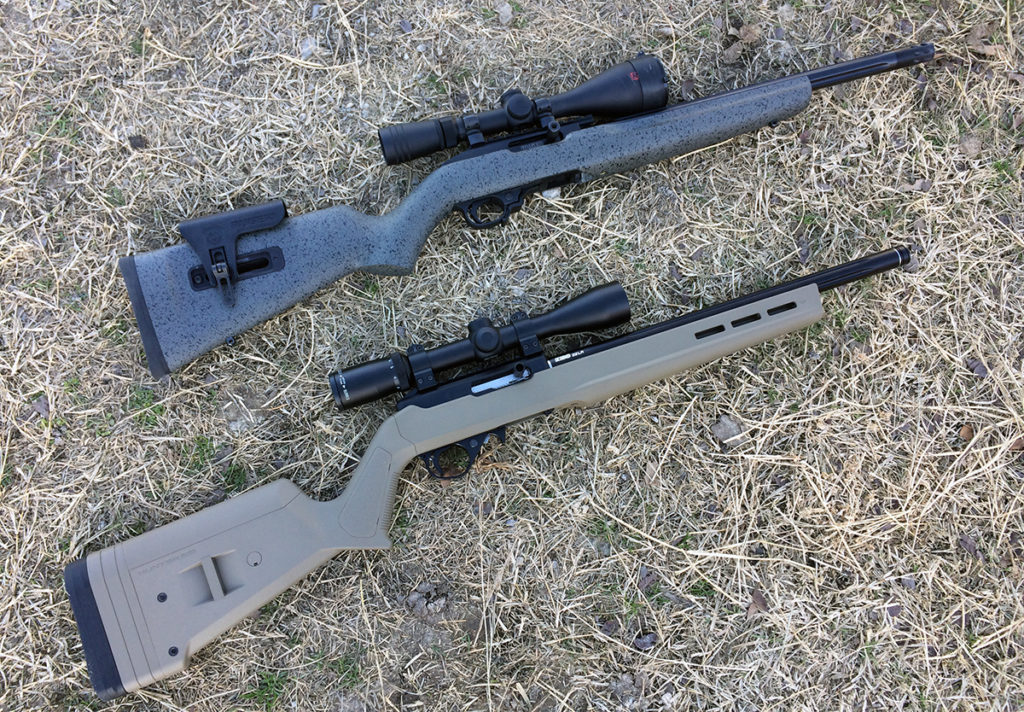 The Ruger Competition 10/22 would excel at its namesake activity, but how does it stack up against a custom build using premium parts? To answer this question, I asked one of my buddies to donate his 10/22 to science, and I compared parts lists, price, and accuracy.

It’s possible to build a cheaper 10/22, especially with Brownell’s new BRN-22 receiver. I did it last year, and my all-in price was around $460. But I didn’t get the accuracy I was expecting. That gun shot the occasional sub-1” group from 50 yards, but it wasn’t as consistent as Ruger’s offering. Your build might shoot better at a lower price point, but I haven’t seen that success.

Moving up the quality scale, here’s a partial parts list for my friend’s 10/22:

Add another $15 for pins and screws, and you’re looking at a total cost of around $750.

You won’t pay that much for a Ruger Competition. Even though the MSRP is significantly higher, the street price actually comes in about $60 less—you can find one on GunsAmerica for $690.

In terms of accuracy, the guns are comparable. Using this gun’s favorite ammo, along with the Lead Sled and a scope, I averaged groups around 0.8 inches, which is just a bit smaller than my average with the CCI and the Ruger. 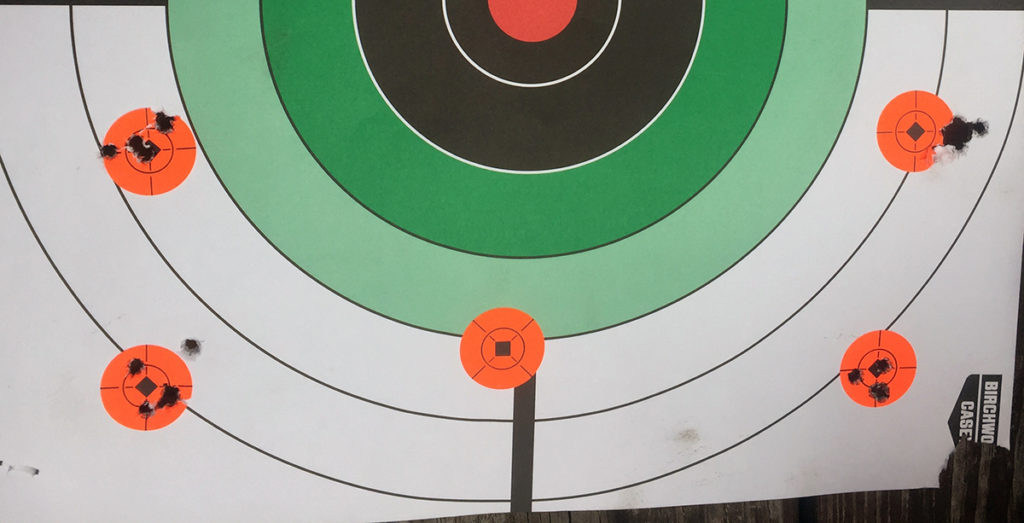 These groups were shot with the same setup and on the same day as the Ruger — 50 yards using a Caldwell Lead Sled.

There’s so much variance in custom 10/22 builds that it’s tough to come to any definite conclusions. You might be able to find the parts listed above at a lower price, for example, or use cheaper parts from a different company that performs better. But it’s clear (in my mind, at least) that Ruger has developed a turnkey 10/22 for those shooters looking to get the most out of their plinker.

If you’re thinking about building a custom 10/22 for competition, you might save yourself some trouble with this new rifle from Ruger. It’s accurate, feature-rich, well-built, and reliable. With this first addition to Ruger’s Custom Shop, I’ll be looking forward to what they release in the coming months.

Next post: Mossberg 590A1 Retrograde – A Birthday Present from Mossberg to Us