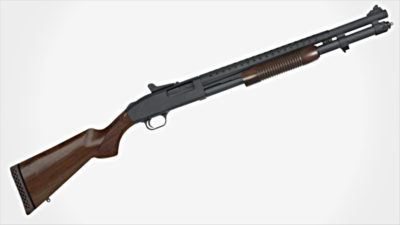 Gearing up for the new year Mossberg is adding four new guns to the company catalog. They’re expanding their Shockwave series and adding the new Retrograde series.

The newest Retrograde shotguns are throwback designs that combine modern features with traditional furniture. The Shockwave series is Mossberg’s line of non-NFA compact firearms chambered for the full spread of popular shotgun gauges and bores.

Mossberg is launching with two Retrograde models, a 500 Persuader and a 590A1. The Retrograde versions of these guns come standard with hardwood, not synthetic, stocks and forends. The forends are classic Mossberg corn-cob-pattern.

The Retrograde 590A1 stands out the most with ghost ring sights and a full-length heat shield. It has a 9-shot capacity and all the MIL-SPEC improvements including the bayonet lug, parkerized finish and additional steel parts in the fire control group and safety.

The Retrograde Persuader is more of a throwback with a blued finish and a brass bead sight. The suggested retail prices are $504 for the Persuader and $902 for the 590A1. In-store and online pricing is sure to be less. 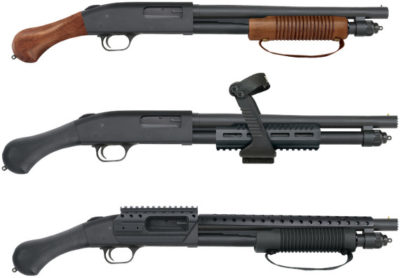 The Shock ‘n’ Saw (middle) and SPX (bottom) join the Nightstick (top) as the newest additions to the Shockwave series. (Photo: Mossberg)

The new Shockwave couldn’t be any more different and still be a shotgun. Called the Shock ‘n’Saw, this short-barreled gun has a synthetic polymer bird’s head grip and chainsaw forend for overhanded used.

The chainsaw grip attaches to a modular forend with a 6-o’clock Picatinny rail for lights and other accessories with what appear to be M-Lok slots along the sides. It also has a standard brass bead front sight for use without the chainsaw grip.

Mossberg is also announcing the Shockwave SPX. This gun takes things to the next level with a factory-installed side saddle for extra shells with an integral flattop rail for optics. The SPX has standard Shockwave furniture including the synthetic forend with a safety strap and it also gets a heatshield running to the muzzle.

Both of the new Shockwaves are priced at $560 and both have breacher-cut barrels. All of these new guns are chambered for 12-gauge shells and have cylinder bore barrels.

It’s clear that Mossberg was on to something with their recently-announced Nightstick. Another Shockwave-pattern gun, the Nightstick sports the same style of hardwood furniture as the Retrograde series.

There’s plenty of room in the market for new guns with old trappings, just as much as there’s room for crazy guns that take things way over the top. It so happens that Mossberg makes both and everything in between. Make sure to visit Mossberg.com for more information.

Next post: California Lawmaker Wants to Tax Sale of All Handguns, Semiautomatics

Previous post: Husband Allegedly Abuses Wife for Years, So She Kills Him in Self-Defense