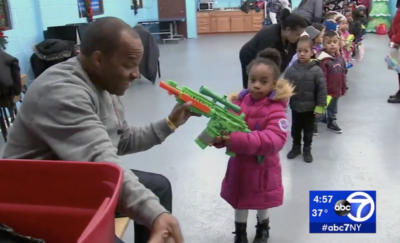 Children who didn’t have toy guns to bring to the party were actually given water pistols and nerf blasters by organizers so they could play the turn ’em in game.

“Saying no to guns is important – even toy guns,” said Hempstead Village Mayor Don Ryan as reported by WABC.

Though it doesn’t need to be said toy guns are not guns, they’re toys! They’re meant to be played with! Unlike real guns, they are by their very nature harmless! A “safe alternative” to a toy gun is a toy gun because it’s just a toy!

“I want to make sure when you grow up nothing happens to you,” Acosta told the children in attendance.

Right, because taking away toys from children makes them safer when they become adults. Makes no sense.

How about instead of indoctrinating kids to have an irrational fear of firearms, include toys that resemble firearms, we teach them actual gun safety?  And when each child is ready, we teach him or her the tenets of responsible gun ownership?  Education, not fear, is the answer.

Because despite what Acosta says, there is no way to make sure “nothing happens to you.” Life is dangerous.  There are some very bad people out there.  And not learning how to defend yourself in the face of such people is one way to increase the odds that something does happen to you.

As clinical psychologist Dr. Jordan Peterson wrote in his book “!2 Rules for Life, “Naive, harmless people usually guide their perceptions and actions with a few simple axioms: people are basically good; no one really wants to hurt anyone else; the threat (and, certainly, the use) of force, physical or otherwise, is wrong…These axioms collapse, or worse, in the presence of individuals who are genuinely malevolent. Worse means that naive beliefs can become a positive invitation to abuse, because those who aim to harm have become specialized to prey on people who think precisely such things.”

The folks running this toy gun buyback are naive.  What’s worse is they’re setting up these children to be victims later on in life.