Getting Out of a Jam: Semi-Auto Handguns

Murphy’s law goes something like this: If something can go wrong, it will. And then it is often added that it will go wrong at the worst possible time. Sometimes when something breaks or doesn’t work right, it’s not really a serious matter, but if a semi-automatic handgun decides to quit working in the middle of a fight for your life, it is very serious.

If you’re a shooter of semi-automatic handguns and you’ve never had a malfunction or stoppage, then you are very lucky or just don’t shoot very much. Some pistols are more reliable than others, but even the best can stop working from time to time. It may be caused by a broken part, dirt or debris, or faulty ammunition. In the middle of a life and death struggle where the shooter is trying to stop a felonious assault by a criminal, it doesn’t matter. It just needs to be fixed, right now.

Fortunately, there are techniques for clearing a stoppage or malfunction rapidly and getting the life-saving pistol back in working order. But to perform these techniques fast and effectively, you first need proper instruction from a qualified teacher and then you need to practice them frequently so they are done automatically, without thought. And don’t think you can completely learn these techniques from reading an article, watching a video or reading a book. There is no substitute for instruction from a qualified instructor who can also watch how you perform these drills and make corrections.

There are more and more quality schools now that teach people how to save a life with a gun, but there are also many instructors who claim to know what they are doing but don’t. So seek out quality instruction, commit your time and pay the money. It could save your, or a loved one’s life.

The oldest and most prestigious privately-owned and operated gunfighting school is Gunsite, located near Prescott, Arizona. It’s been around for more than 40 years now and teaches gun handling skills to people from young to old and from those who have never handled a gun to some very highly skilled people who risk their lives every day in service to the country. Gunsite was founded by Jeff Cooper, a retired Marine Lt. Col. who revolutionized handgun fighting and created what is called the modern technique of the pistol. Professionals who know what they are doing with a handgun are utilizing techniques developed by Cooper.

Here are some of the things taught at Gunsite and that are used by some very switched on, knowledgeable people when clearing malfunctions. There may be other ways to clear stoppages, but these are known to work.

You press the trigger and instead of the round firing, nothing happens except maybe the hammer falling or the striker flying forward. In a gunfight, that’s a very bad thing and needs immediate attention. So, immediate action is taken. You don’t need to know what caused the failure to fire – it could be faulty ammunition or no round in the chamber. You just need to get a fresh round into the chamber fast and then get the gun back on target in case a shot is needed. 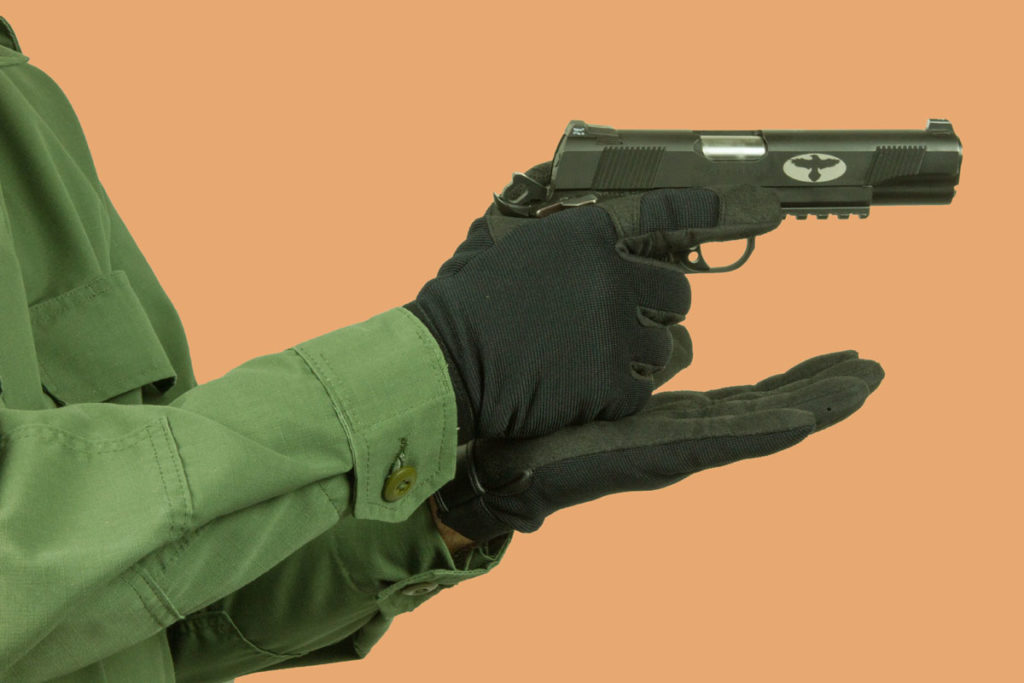 The first step in clearing a stoppage in a semi-automatic handgun is to tap the bottom of the magazine to make sure it is fully seated and locked in place. The finger is off the trigger and straight along the frame.

Here’s how it works. Immediately, when the gun fails to fire, tap the base of the magazine hard to make sure the magazine is fully seated in the gun. If it isn’t, the slide may not pick up the top cartridge and feed it into the chamber. 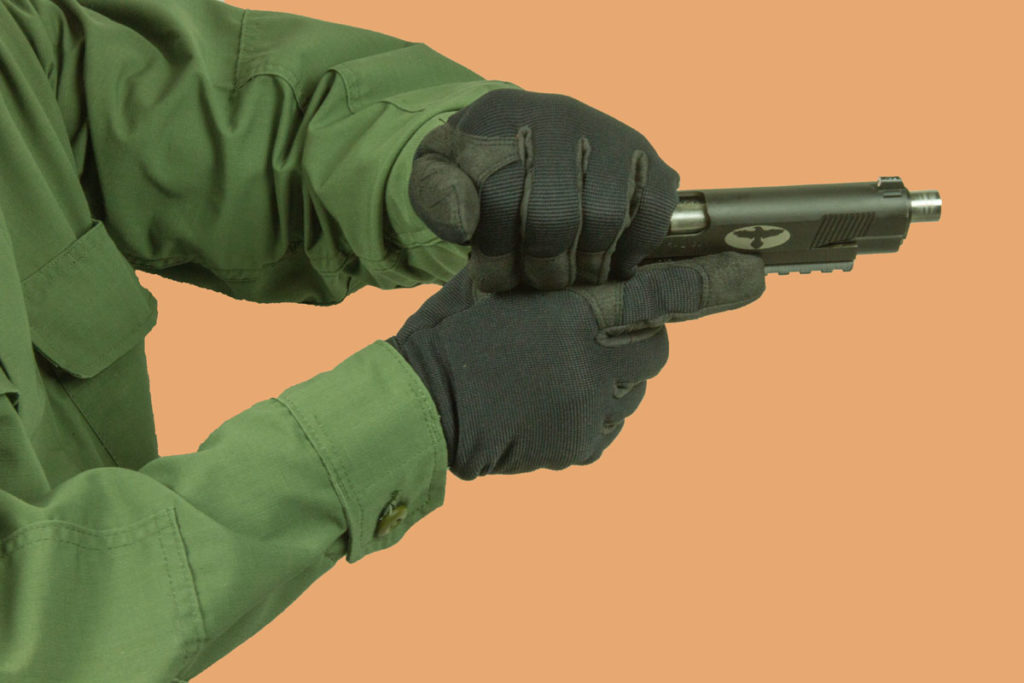 To rack the slide, keep the trigger finger straight along the frame, cant the gun to the right so that gravity assists in pulling out anything caught in the ejection port, and point the muzzle in a safe direction. Then grip the slide with the thumb towards the body and fingers together pointed down, being careful not to cover the ejection port. Next smartly pull the slide to the rear and let it go to fly forward under the full power of the recoil spring.

Then rack the slide with force. These guns are not delicate instruments and are built for hard use. Racking the slide means pulling it to the rear then letting it go so that the recoil spring slams the slide forward under full power. Do not ride the slide forward and do not cover the ejection port with your hand. The technique taught in most schools is to maintain a firing grip with the dominant hand, except take the trigger finger off the trigger, straighten it and place it along the frame. Then grasp the slide with the other hand with the fingers together pointing down and the thumb to the rear. This makes for a very strong grip. Then rotate the gun slightly to the right so that gravity can help pull anything stuck in the ejection port out, and while pushing the dominant hand forward with the gun in its grip, pull the other hand to the rear while holding onto the slide. Do this fast and hard and let the slide be ripped out of the offhand so it slams forward. That should eject a round if there is one in the chamber and feed another round.

Next get back on the sights and see if a shot is needed. If so, fire. 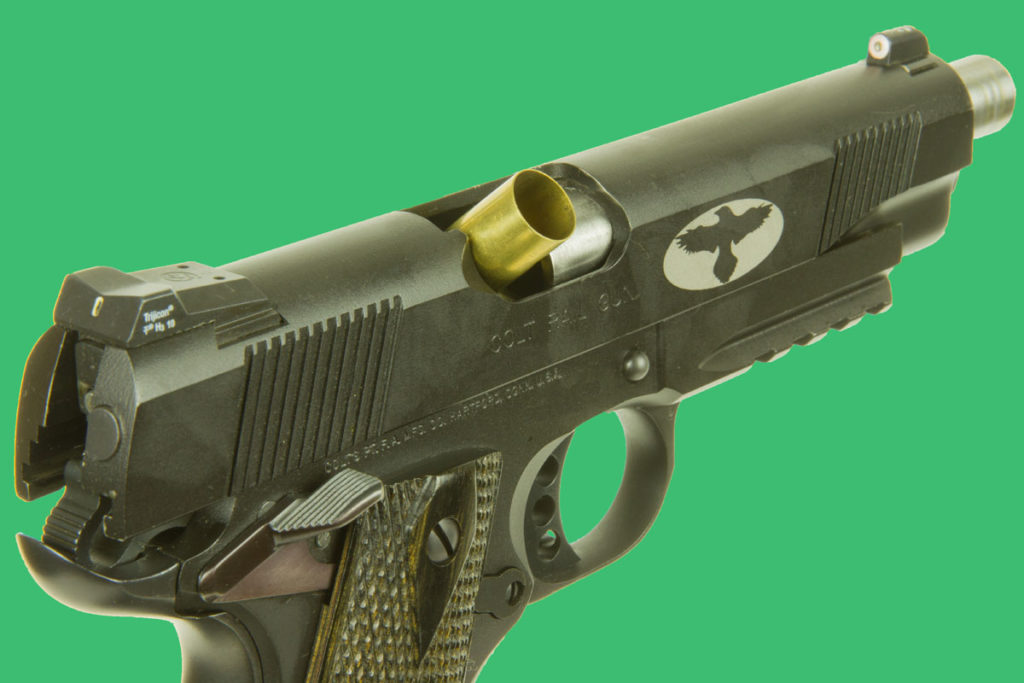 This is what a smokestack looks like. To clear it, the bottom of the magazine is pushed hard into the gun to make sure it is seated and then the slide is racked while keeping the hand clear of the ejection port. (Doug Larson photo)

This is when a fired case does not clear the ejection port and gets caught between the barrel and slide. It may be a stovepipe where the fired case sticks straight up like a stovepipe. But it doesn’t matter. When you press the trigger, nothing will happen. That’s your cue to take immediate action. And that immediate action is just like that described above for a failure to fire. 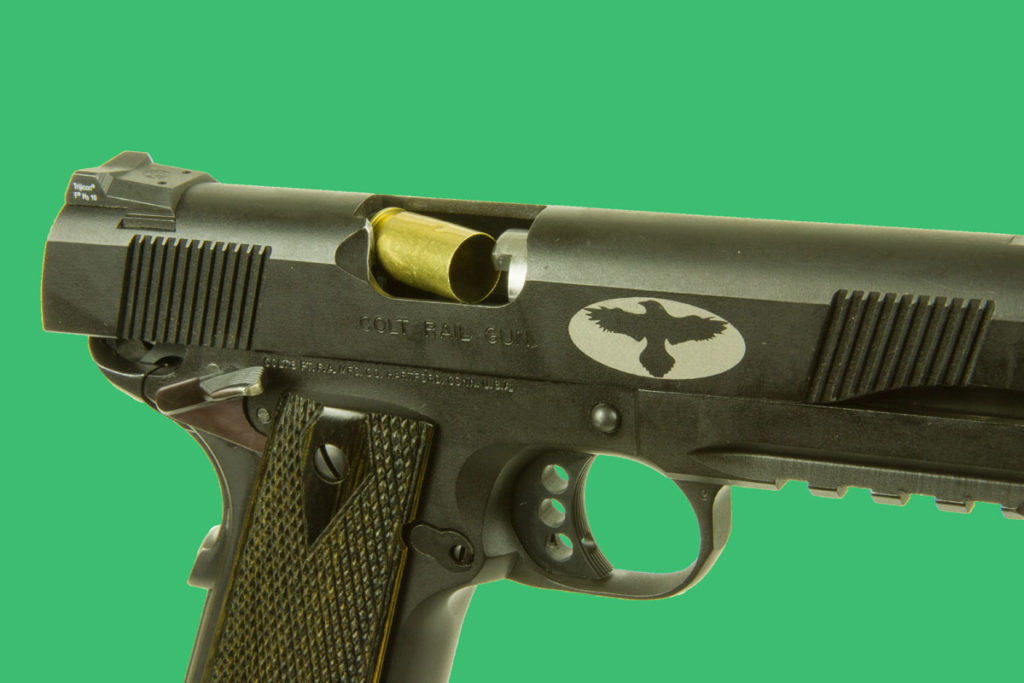 Sometimes a failure to eject does not result in a smokestack and instead, the spent case gets caught laterally in the ejection port. Be careful when racking the slide so that your hand does not get cut by the edge of the case.

If a round gets hung up on the feed ramp or for some other reason does not go into the chamber and keeps the slide from going into battery—in other words, the slide does not fully close on a live round—a press of the trigger will result in nothing. Again, that’s your stimulus for taking immediate action, and that action is exactly the same thing as for the previous two failures. You don’t have to figure out what caused the stoppage, you just need to get the gun running again. That’s why you need to practice this technique.

Failure to Extract and Double Feed 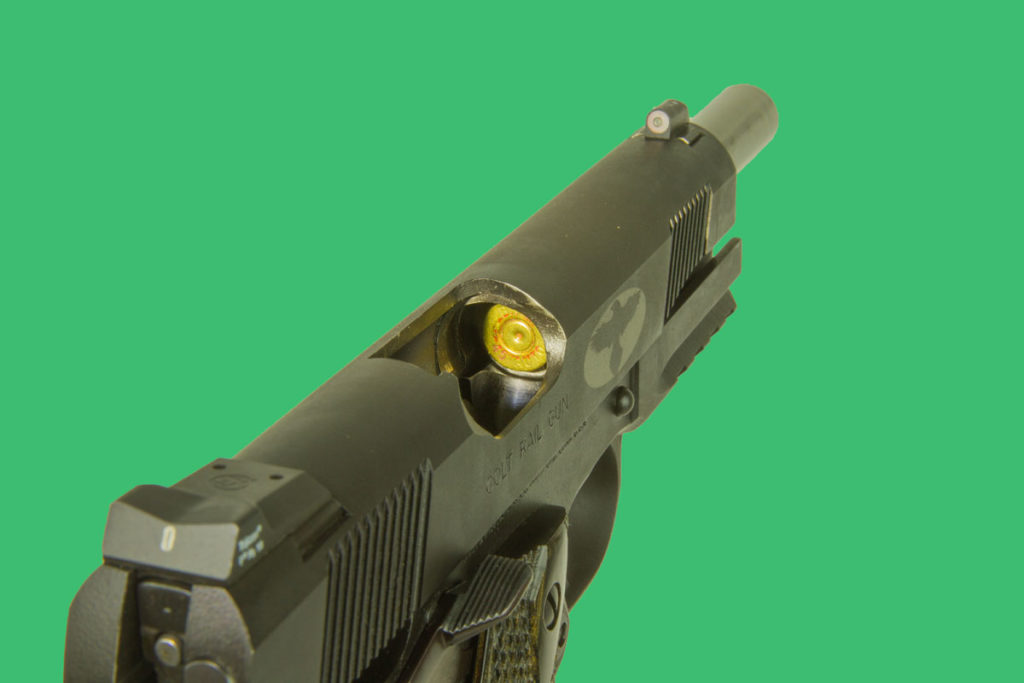 If the spent case stays in the chamber, it will look like this. Clearing this stoppage is done the same way as clearing a failure to eject.

If a fired cartridge case stays in the chamber instead of being pulled out and ejected, it is called a failure to extract. Maybe the extractor is weak or the chamber is dirty so the case is stuck. This condition often results in another problem called a double feed, because the slide may strip a fresh round from the magazine and attempt to chamber it. But the fresh cartridge will slam into the rear of the stuck case. Regardless of the cause, the first thing to do is execute the immediate action used in the previous failures. It that clears the stoppage, great, but it may not. 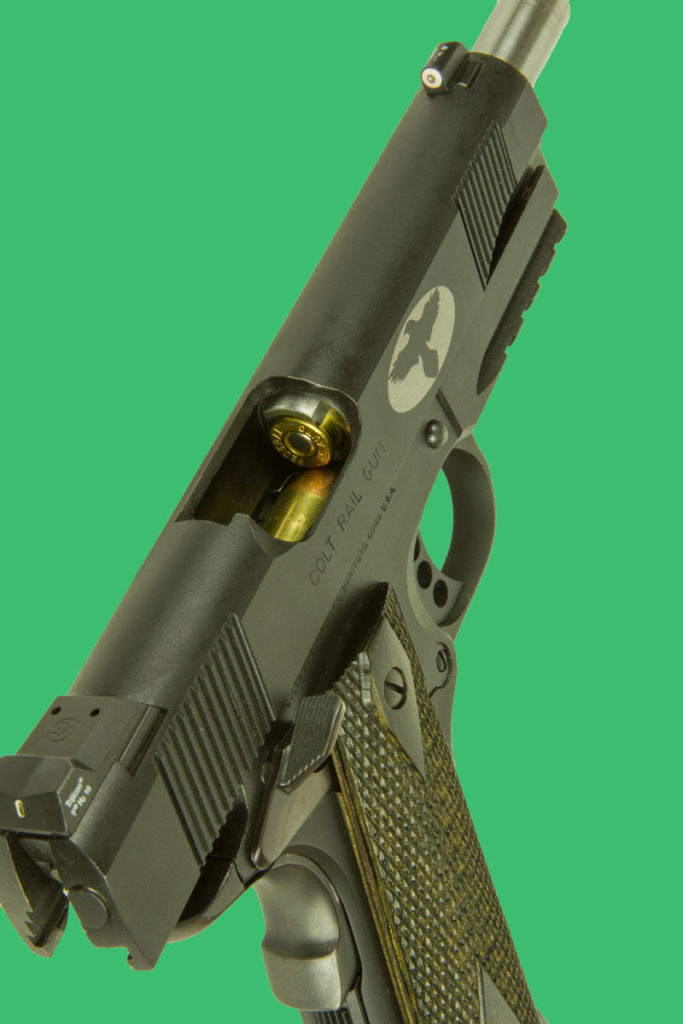 This is a double feed where a cartridge is already in the chamber and another cartridge is trying to get in at the same time. The second cartridge runs into the back of the first one and stops the action. 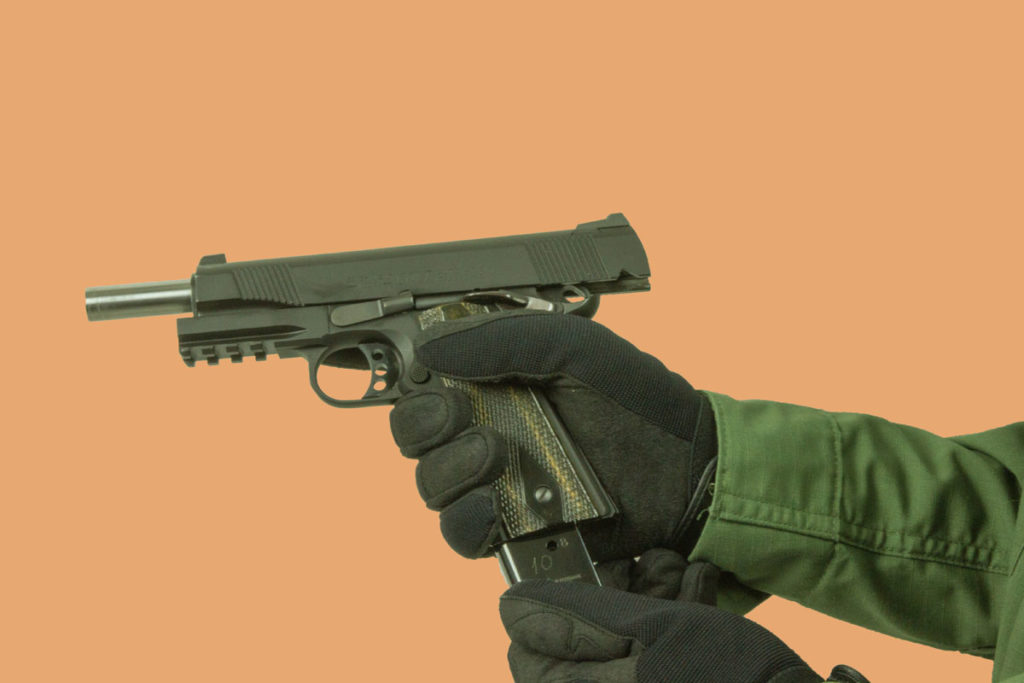 In the case of a double feed, the magazine may be stuck. So the magazine release is pressed with the thumb of the firing hand while the other hand pulls the stuck magazine out of the well.

If it doesn’t work, you have a bigger problem, and you have a decision to make. Because this will take more time, the best course of action may be to run away and take cover. Or, if you carry a backup gun, draw it and get back into the fight. Every situation is different, and there is no hard and fast rule. You are the only one who can decide what to do. If you decide to try and clear the stoppage, take cover if at all possible. Or at least get some concealment or kneel to make yourself as small as possible. If you are part of a team, let your teammates know you are out of the fight so that they can cover your area of responsibility or give you cover.

Next, release the magazine by pushing the magazine release button. The magazine might be stuck though and have to be pulled out. If this is the only magazine you carry, hold onto it because you will need it to get the gun back up and running. If you carry a spare, you may still want to hold onto it, but that again is your decision. Putting it in a pocket will slow you down, so consider that. The best advice is to always carry a spare loaded magazine. Magazines are notorious for causing problems and spare ammunition is always a good thing to have, so carry a spare.

Once the magazine is out of the gun, rack the slide three times. If you are lucky, that will extract the stuck case and clear any fired or unfired cartridges from the ejection port and action. You remembered to slightly cant the gun to the right so gravity can help, didn’t you?

Next, insert a fresh magazine or the original magazine if you don’t have a spare, into the gun, make sure it is fully seated, and rack the slide to feed a round into the chamber. Then assess the situation to see if a shot is needed. If that doesn’t clear the stoppage, you are in real trouble, so have a plan B.

Being able to do these drills quickly and automatically can save your life. So you need to learn to do them correctly and then practice. Practice means doing them right and repeat until you don’t have to think about them. We are talking about hundreds of repetitions and not just 10 or 20 times.

And you should learn to do them with one hand because your other hand may be busy holding onto a loved one or it may be injured and out of action. One-handed malfunction clearing is possible, but space does not permit describing the techniques here. Again, get training.

***Shop GunsAmerica for your next self-defense handgun***

About the author: Doug Larson is a former Contributing and Field Editor for Guns & Ammo magazine, Doug Larson’s articles have appeared in many top firearm publications. He has completed hundreds of hours of firearm and self-defense training provided by some of the finest world class gun fighting instructors and schools. He has experience with handguns, rifles, shotguns, submachine guns, machine guns and other crew served weapons. He reports on the tactics, techniques and procedures developed by real life gunfighters and taught at the best martial arts schools. This information is passed on to the reader to stimulate thought and a desire to get the best training possible.