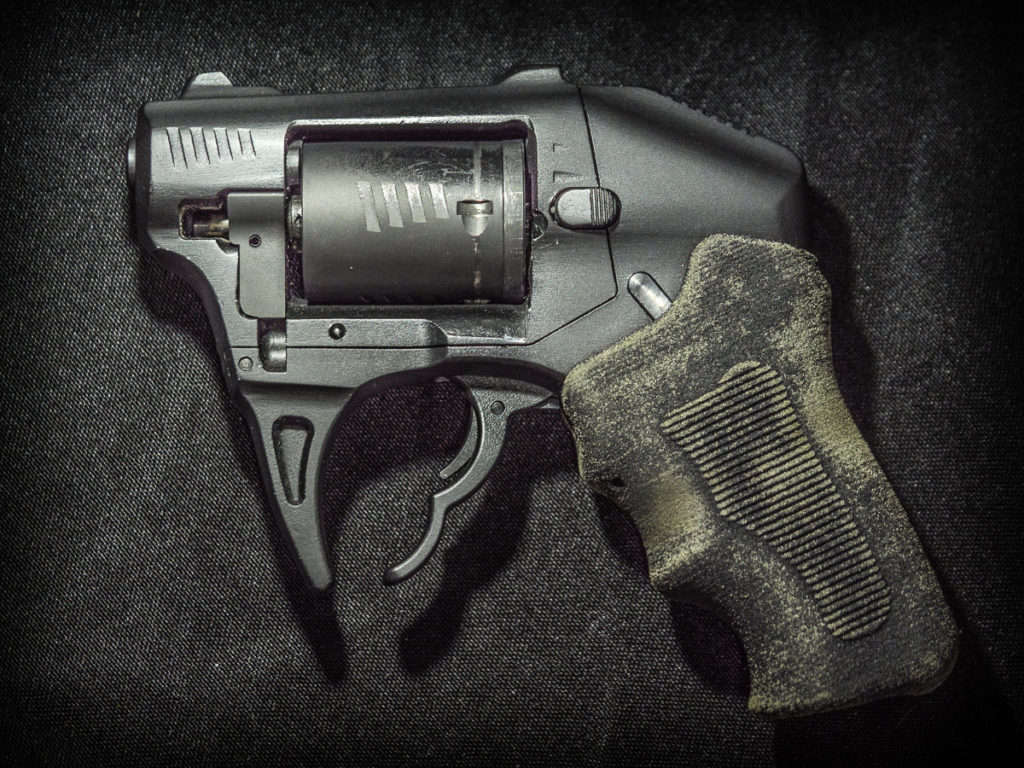 The S333 Volleyfire is meant for personal protection.

Standard Manufacturing’s new S333 Volleyfire is a revolver intended for personal protection, but it’s far from your normal EDC gun. This compact gun brings new ideas to the world of everyday carry guns, and it makes some intriguing arguments. 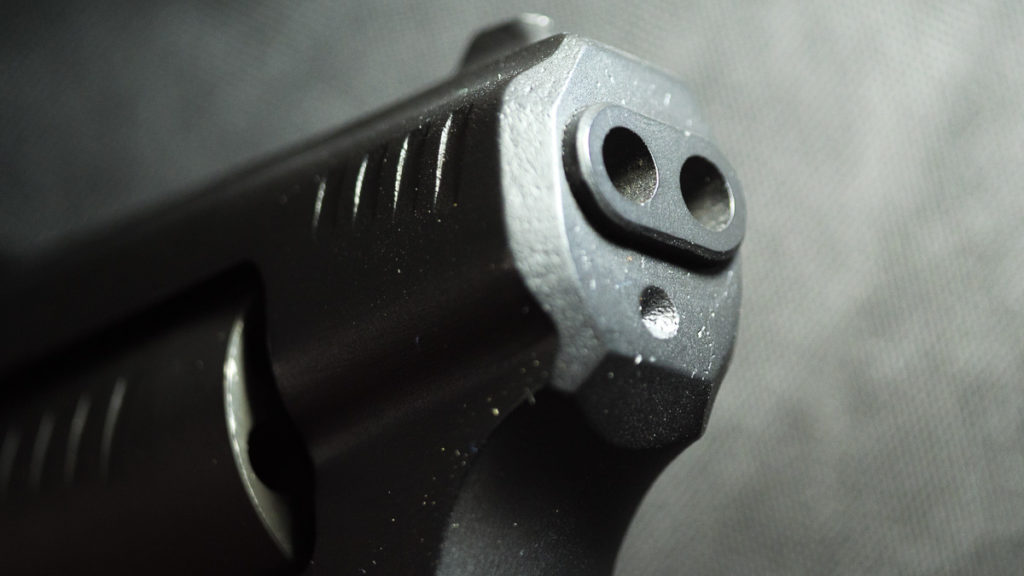 The side-by-side barrels are chambered in .22 magnum.

The barrels aren’t the only thing doubled. There are two independent firing pins, too. Although revolvers are known for their reliability, even if you had a failure with one chamber or one firing pin, the other would still fire. 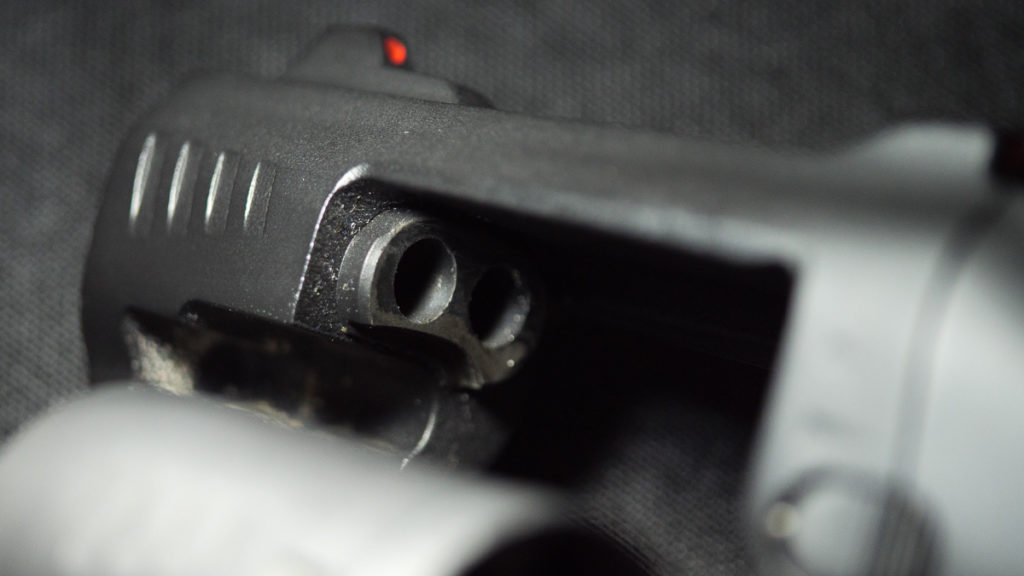 With each pull of the trigger, you’d not only send a deadly hollowpoint toward your attacker but also a cloud of fine shot. The likelihood of missing a shot with any hognose revolver is high, but the shot would likely make an impact. With eight rounds, firing one of shot and one slug each time you could have a successful deterrent–“a curtain of protection.” That’s an interesting take on personal defense. 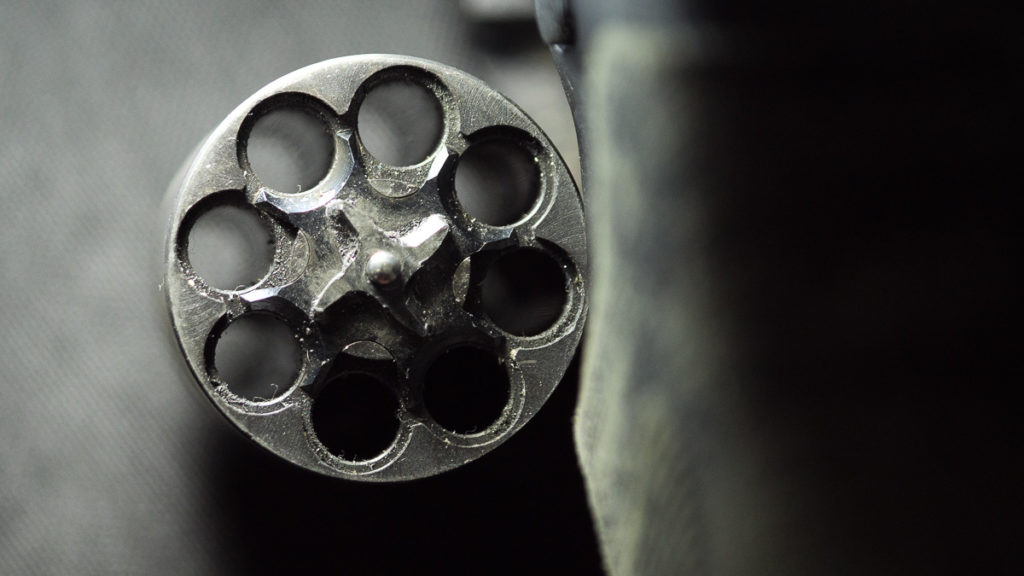 You could empty all 8 round in less than 3 seconds.

The Volleyfire also features the first Glock-style trigger safety on a revolver and the first two-fingered grip on a trigger. The 9-pound trigger is pretty normal for double action guns, but those with smaller hands or less grip strength will find pulling with two fingers makes the trigger feel much lighter. Interestingly, the trigger must be used with two fingers–if you try to fire with one, then your middle finger interferes with the trigger against the grip. 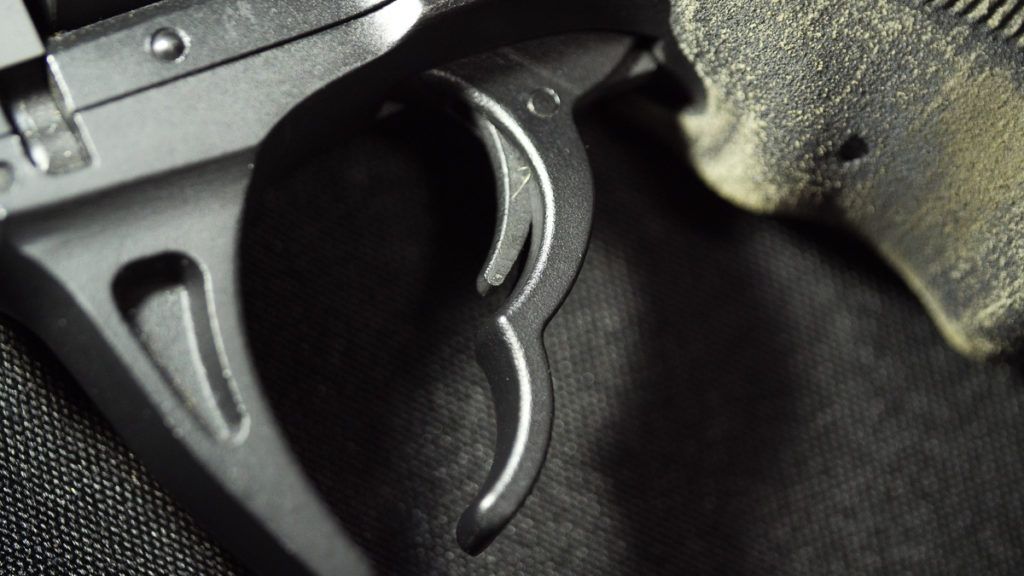 The double-finggered trigger is set at 9 pounds, but two fingers make it feel lighter.

The trigger has a very long pull, and combined with the two finger requirement it’s unlikely that you’ll pull the trigger accidentally. There’s a transfer bar between the hammer and the firing pin, as well. 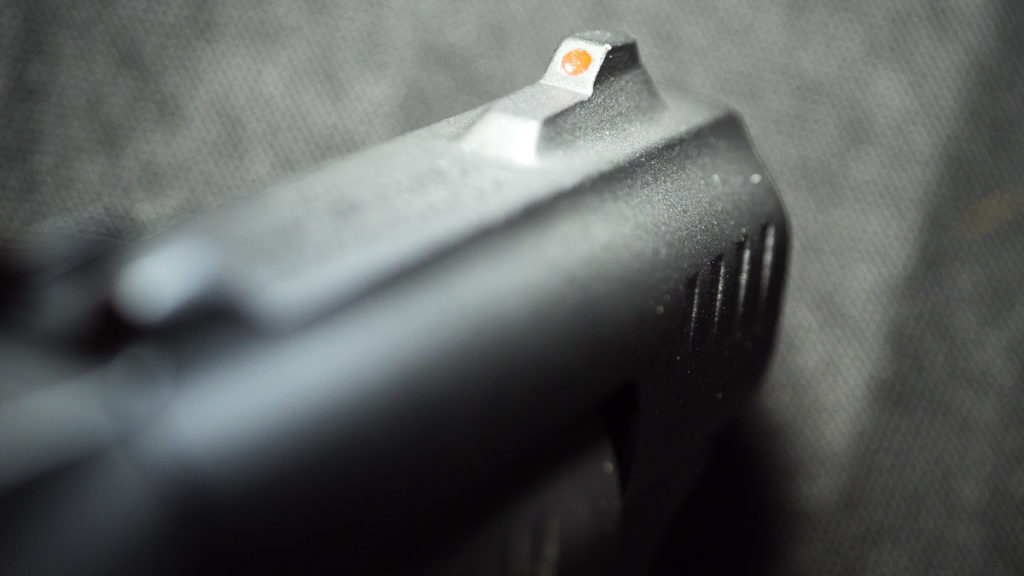 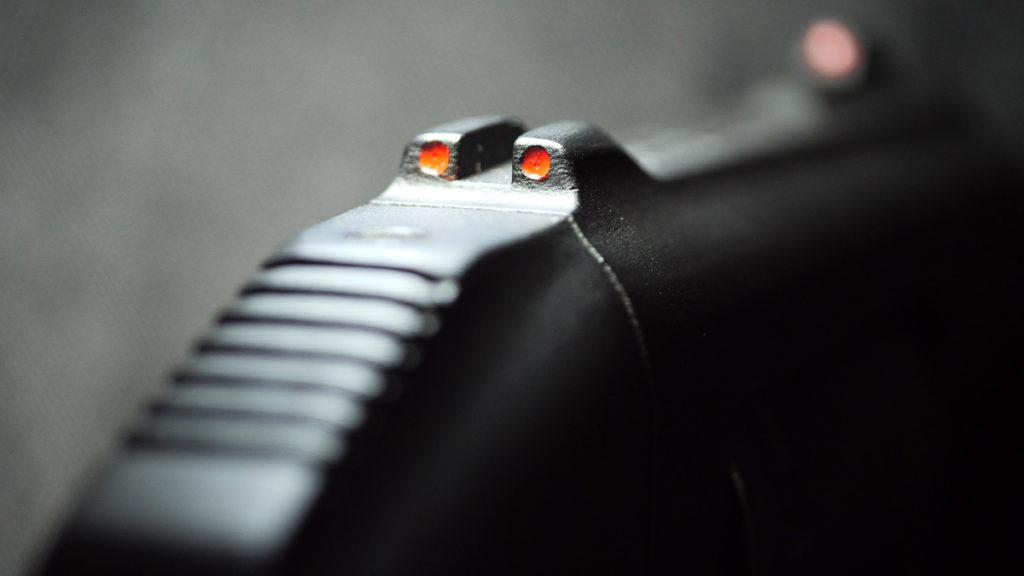 I’d like to see this gun at the range and see what the effective range might be. 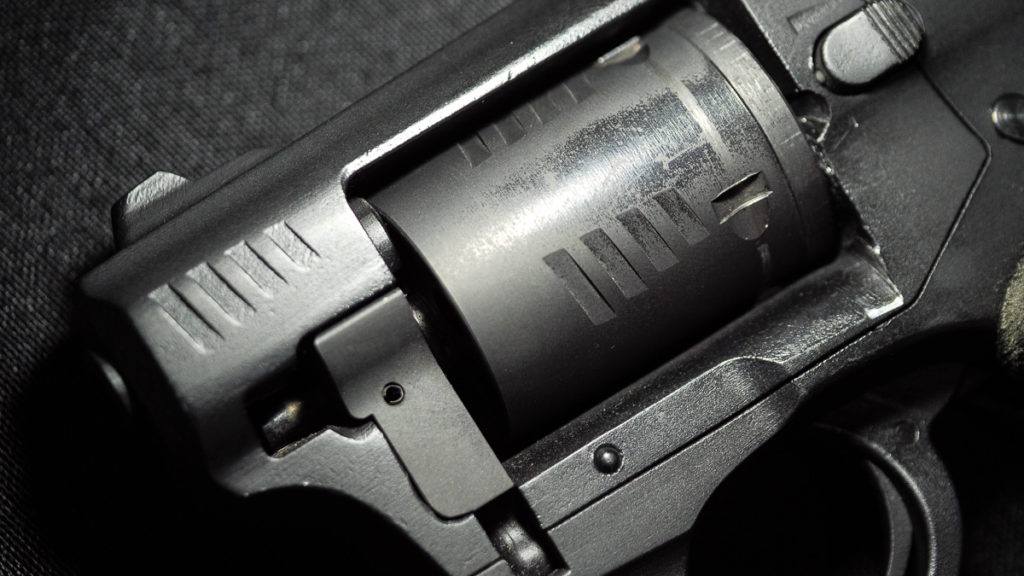 High strength steel for the cynlinder and barrels, 7075 aluminum for the frame.

I liked the analogy I got at the booth. When there’s a fire, you see a fire extinguisher and you pick it up, pull the pin, point it at the fire and squeeze the release. You don’t have to worry about the source of the flames or any buttons that change from model to model–just point and shoot. That’s how this gun is intended to be used. 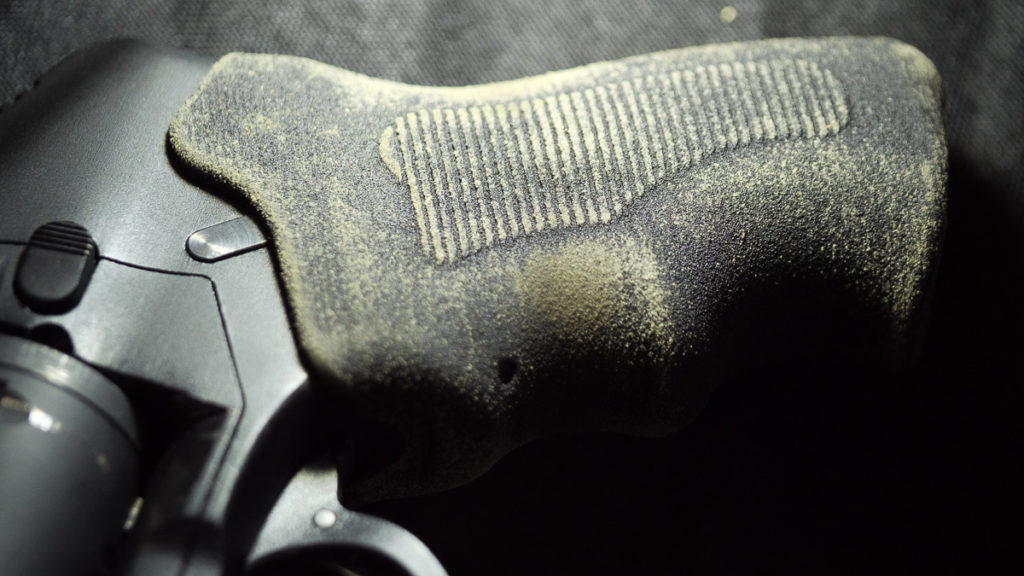 The production models will have a polymer grip. 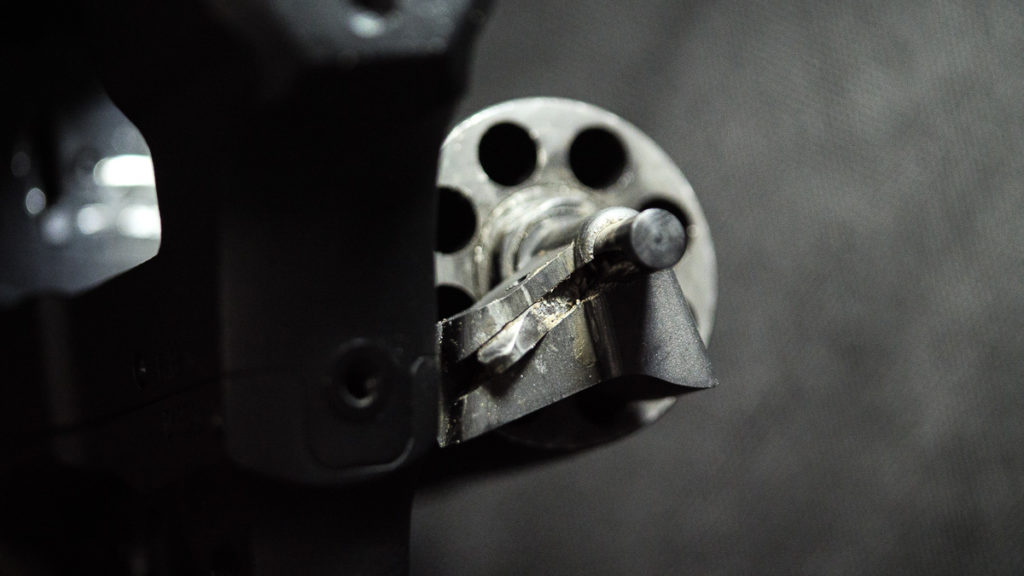 View from the front of the cylinder. 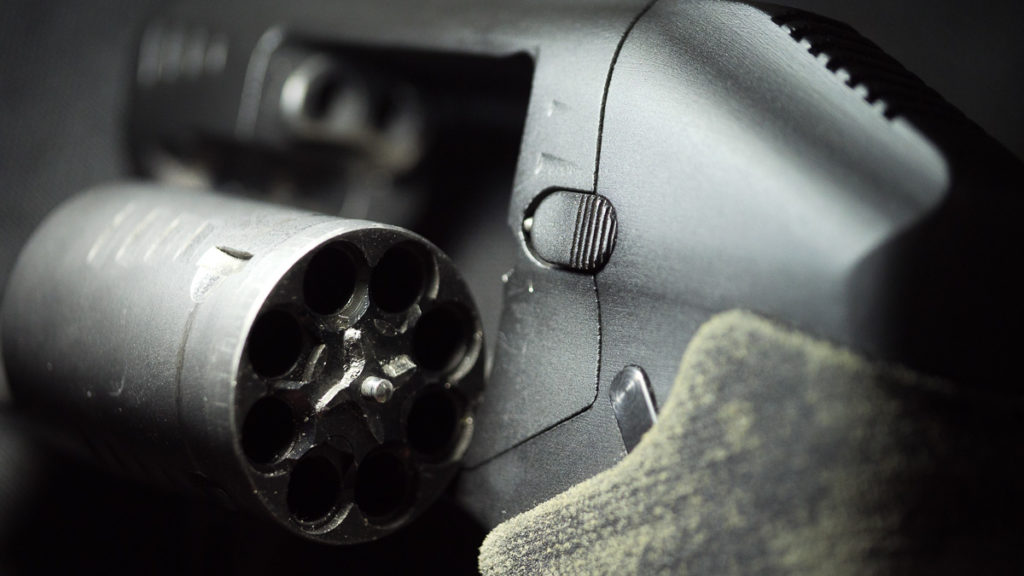 You can alternate slugs and shot and create “a curtain of protection” with each trigger pull.

It’s a cool gun. It seems well made (and it should since it’s made with the same tools they used to manufacture $20,000 shotguns) and it’s intuitive to use. It’s intended for self-defense and it may be ideal for elderly shooters with less grip strength.

MSRP is $369 and the S333 Volleyfire will be available from Standard Manufacturing in April 2019.